If you don’t believe in miracles, I hope by the time you’re done reading this you will. 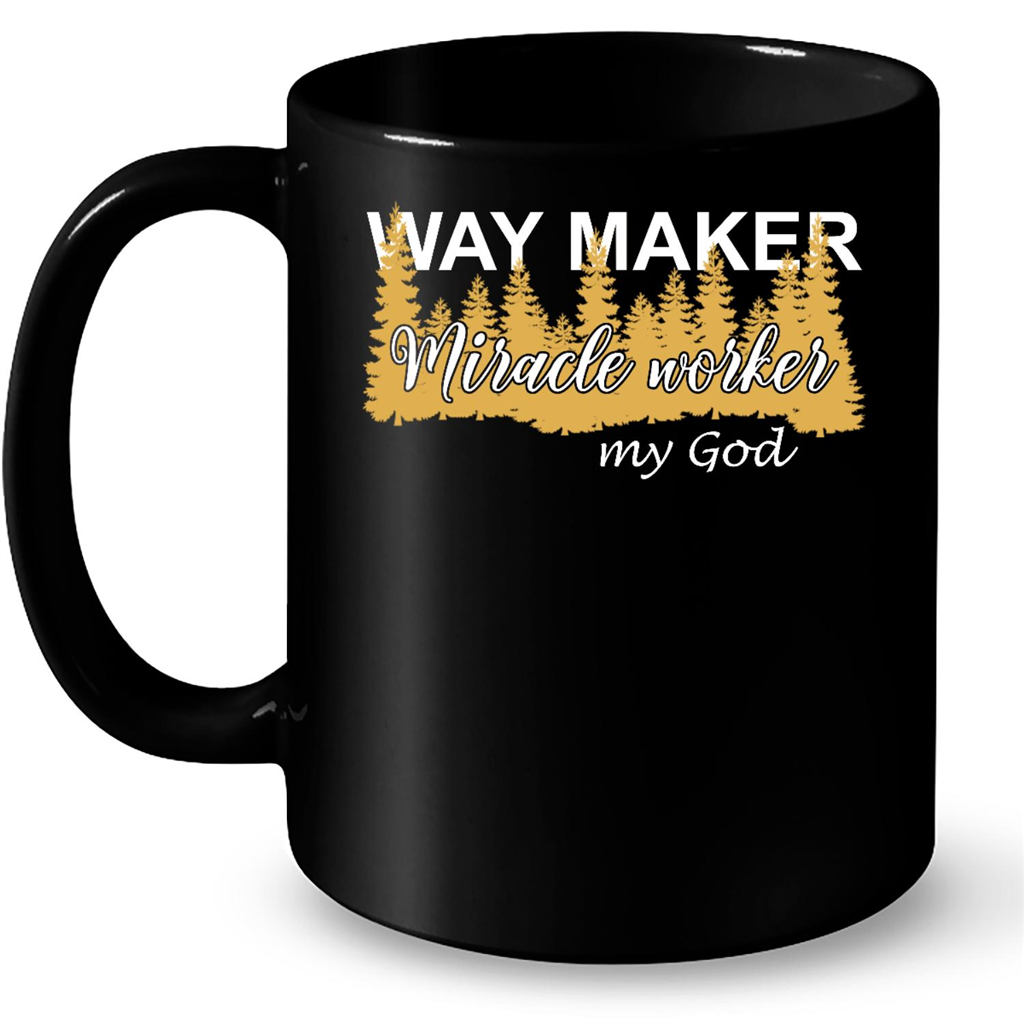 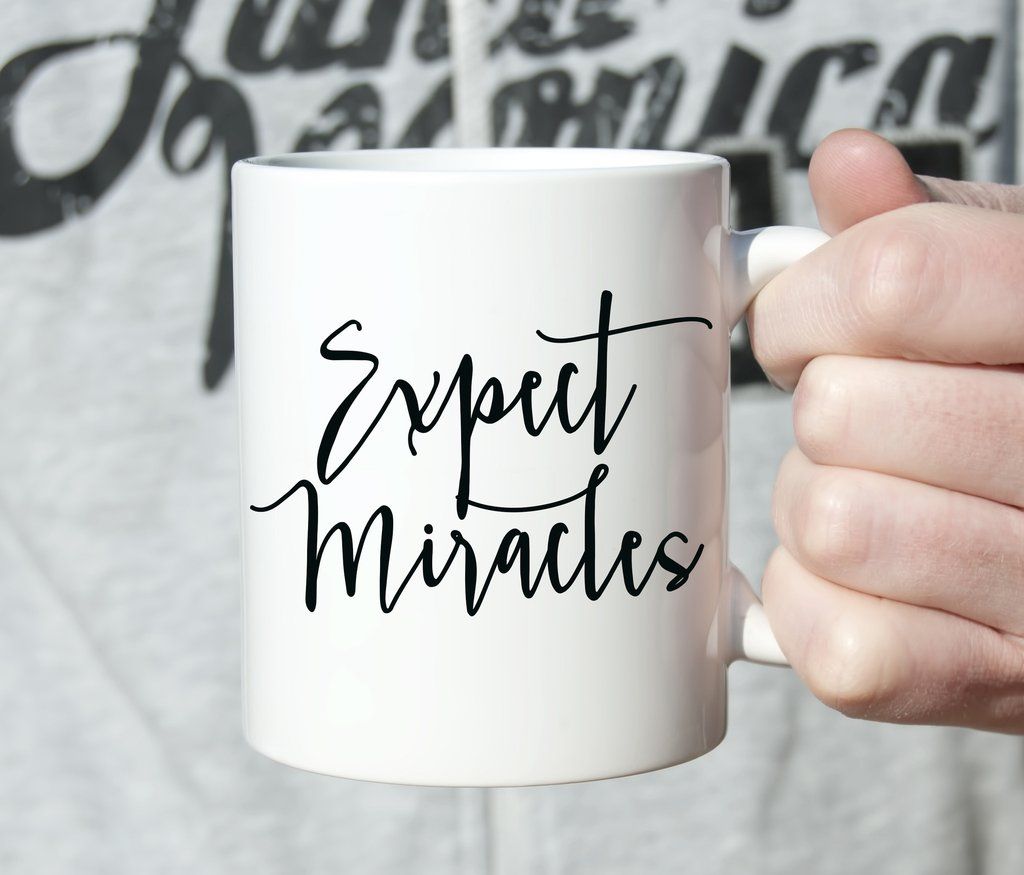 That’s what happened to me.  A full-blown, turbocharged miracle snuck up on me when I wasn’t looking, made a believer out of me, and changed my entire life.  I’m praying my account of what happened, and what continues to happen since then, will change yours.

Dying wasn’t on my bucket list, that bright, April morning in 1997.  Not intentionally.  Death is on everyone’s bucket list by default.  Yet I know of no one otherwise healthy who’s added it themselves.

It was right there on mine, though.  Big as day.  There was no way around it, and even though I wasn’t cordial, I’d at least come to a grudging acceptance I was dying, quite literally by inches.

It didn’t matter that I was sitting in church.  On Sunday.  I was there, actively participating in corporate worship.  Well, as actively as possible for me.  I mean, you’d think God might grant a little extra grace to me, since I was being a good egg and being there in that worship moment.

The hard truth is that all but a few inches of my 21-foot-long small intestine had been surgically removed through four separate resection procedures over the span of four years.  For the last two, I’d been largely confined to my house, linked by an IV umbilical to large-bore Hickman catheters pumping total parenteral nutrition (TPN) directly into my blood stream 24/7. It didn’t matter, for it was a delaying action at best.

The ugly truth was I was slowly, expensively starving to death.

Nothing could stop it. I weighed myself daily, and though I didn’t really feel any different, there was no ignoring the numbers, ’cause scales don’t lie. Each day or two, I’d be losing a few more precious ounces.

We were trying to delay that event in hopes someone, somewhere would develop something – anything – by way of a new kind of medical intervention. Meanwhile, through the Oley Foundation we were quietly considering my being placed on the GI tract transplant list at the University of Iowa. That procedure was considered medicine’s last-ditch effort, only undertaken by patients actively dying without it. We never went any farther than that, however; the procedure was still in its infancy and too dangerous. 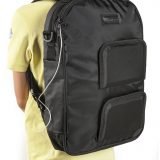 How was I able to be sitting in church, then?  No, I didn’t trundle my ungainly IV tower and clunky pump up the aisle. Nothing like begging for attention. I didn’t even use my nifty new backpack-portable, battery-powered pump. 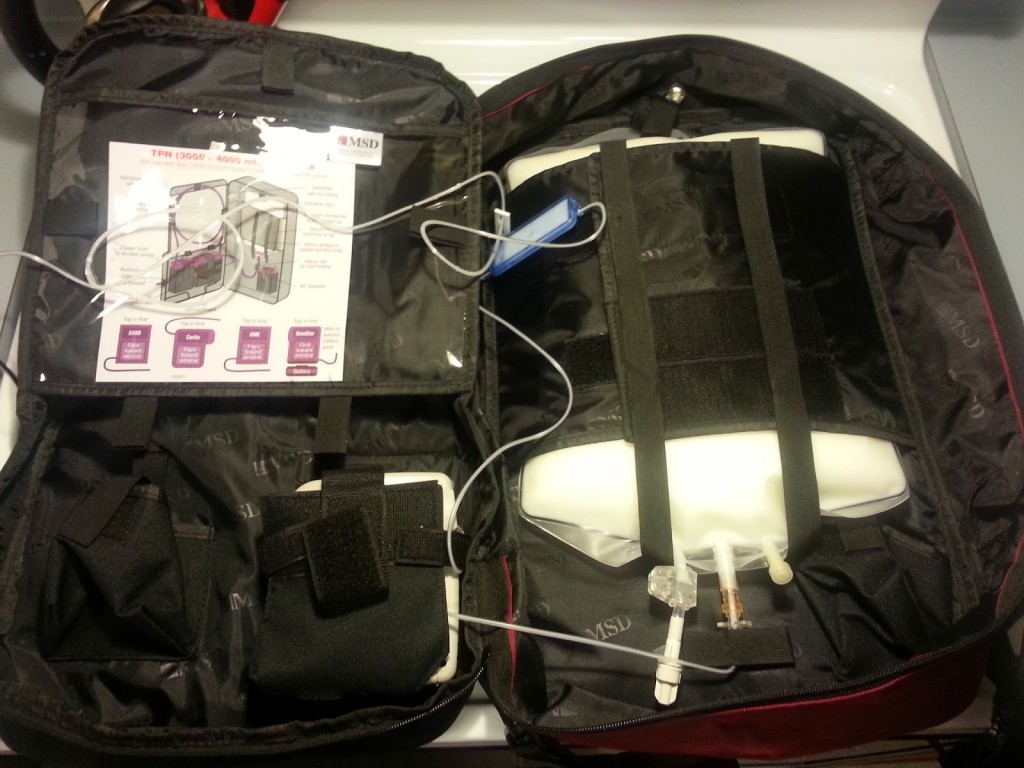 Both of those options meant I had to be actively infusing TPN all that time, and with the incidence of internal infections both at and deep within the catheter sites, neither option was appealing.  Each such infection was potentially life-threatening, and one would hit almost like clockwork every 6 weeks or so. Inviting one by being out in public while infusing wasn’t working for me.

What I had done was to ask my terrific doc, Ruth Weber, M.D., if there was any way to escape the (to me) drudgery of being constantly hooked up to that IV infusion process.  I asked what were the possibilities of just infusing overnight, and then being free to move around the house during the day.  Maybe even to walk outside!

TPN is very rich in all sorts of nutrients and vitamins, and she told me increasing the infusion rate could damage my entire GI system.  I did the puppy-eyes.  She relented, saying we’d TRY it.  So from that point on, Babycakes would come in around 9 PM, saying something benign like, “I am here to POMP (clap, clap) YOU OP!”  For 10 hours each night I’d double the infusion rate, refueling like a thirsty F-16.  Then the next morning, we’d reverse the process before she left for work, and I.  WAS.  FREE!

So that, friend, is how I came to be sitting – yes, physically sitting IN church that Sunday morning in February of 2003. Other than the occasional trip to the store or some other activity, I’d not been able to enjoy that, or much else outside our home, for two long years.

Those years were lonely. Brenda and our kids found Weird Wally, a blue sealpoint Siamese that somehow understood I needed companionship. He was all that most male Siamese cats are not: quiet, easygoing, simple to care for, and willing to loll for hours on end watching TV with me or reading over my shoulder. I think God must’ve infused Wally with something extra during our buddyship over those two years; he always seemed to know what kind of support I needed from hour to hour.

He was a great cat. As I recall, when we moved from that house, God helped us find another shut-in who needed exactly what that super little pet could offer.

So I’m sitting in church, on the left side of the pew, on the aisle toward the back in case nausea hit – a  common part of my recovery process. The aisle was wide, and I could easily get out if necessary – so I settled back, closing my eyes and drawing within all the multisensory bits and pieces of worship I’d always taken for granted before.

I was sitting like that, head back and eyes closed, when I heard at my left shoulder:

“Do you want to be healed?”

My eyes popped wide open! And, yes, though I knew there was nobody standing there, I involuntarily looked anyway. While doing that, I internally answered, “Yes.” I glanced over at my wife, Brenda, to see if I’d interrupted her worship, and I don’t think right then she even knew anything had happened.

I sure did, though. And it didn’t take me long to let her know what had just occurred.

Back in 2001-2002 after three resects caused by my small gut suddenly deciding to die, my gastroenterologist assured us all that, even with 24/7 TPN infusion, I could not last more than three years with 5 being the absolute most, because, in his words, “there is not enough small gut remaining to sustain life.”

Please get that. He told us that following the third small bowel resect which left me four feet – 48 inches.

So after Number 4, which left me with only eighteen inches – that’s 18 inches – you can imagine how Brenda and our kids took that news. I was still recovering, dealing with the whole dead-middle thing, the nausea, being NPO for another six weeks, and all that. In other words, I was pretty much out of it, reliving yet another reminder of my impending death.

After all, if I couldn’t stay alive with 48 inches of my small intestine remaining while infusing TPN, what chance did I have with only 18 inches left? You got the picture, right? Every specialist who’d treated me, my all-star surgeon, even my terrific primary care doctor all agreed: Medical intervention could do absolutely nothing more. I would just die sooner.

I hated what all this was doing to my wife and my children. Where we were worshiping, the RN who first cared for me after my third surgery was attending there as well. I could see it in her eyes. Everyone was kind of tippy-toeing around the fact I was literally starving to death. I did my best to put on a game face and show my faith in action, but it wasn’t easy.

So–you have this picture of a fairly emaciated man, sitting with his family in church, thankful to be alive for one more day. If anyone was paying any attention to me, it was out of loving pity. Everyone knew it wouldn’t be long. 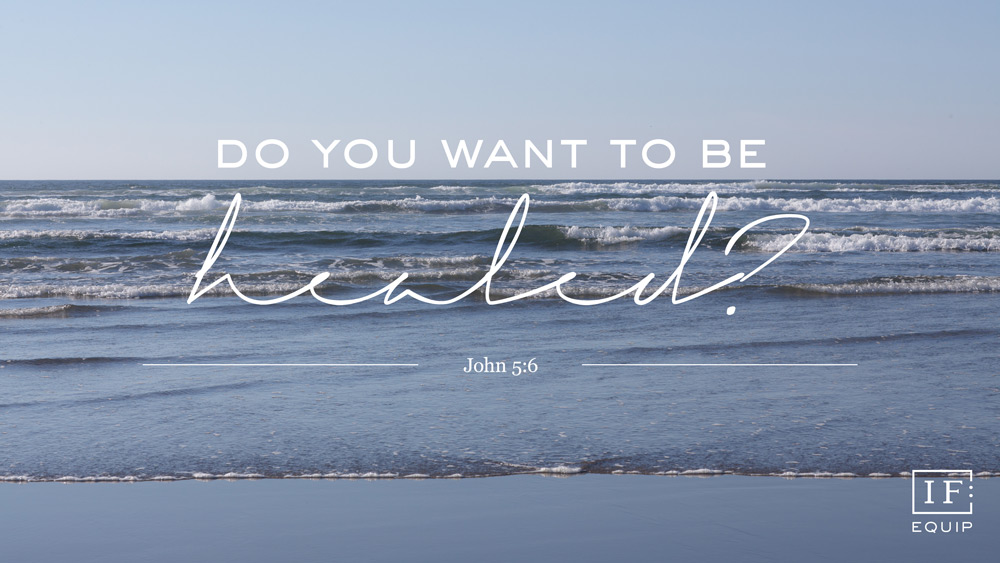 That’s when this occurred – when it was obviously, totally impossible to happen in any manner known to human medicine.

“Do you want to be healed?”

Within a day or two, each morning when I’d weigh, I began GAINING a few ounces: something everyone from my own surgeon to my primary care doc, Ruth Weber, to every specialist I’d seen since April of 1997 assured me was medically impossible. That kept happening until I reached 170 pounds. I have maintained between 170 and 177 pounds since then.

Yes – something incredible happened. Through no effort of my own, I became a walking, talking, singing, listening, caring miracle.

I’ve no idea why. Surely God’s got better material with which to work than me. Yet, even though I don’t understand the ‘why’, when it became clear I was going to live, I promised God two things:

I have been faithful in carrying out both of those promises. God granting me continued life, modified though it is, I will never stop telling my story of God’s amazing grace, blessings, and empowerment.

Someone out there needed to hear this. Thank you for listening.