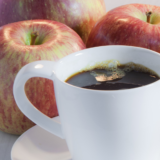 4-year-old Randall was eating an apple in the back seat of the SUV, when he asked, “Daddy?  Um, why is my appo tuhning bwown?”

Clearing his throat, his father began.  “It turns brown because after you ate the skin off, the meat of the apple was exposed to the air which caused it to oxidize, thus changing the molecular structure and turning it into a different color.”

There was a long silence.  Then the boy asked softly, “Daddy, ah you talking to me?”

Being a great communicator involves more than enjoying the sound of your own voice.  It’s more than trotting out your fifteen or twenty favorite sayings you’ve had memorized for years.

Randall’s dad was proud of his smooth response and feeling good about teaching his son something new–right up until it became clear he’d forgotten who he was answering.  His task was not to show off how bright he was.

It was to inform his little boy.

Posted under Common Sense,Tell-A-Story-Make-A-Point,Wisdom and tagged with a child's mind, being a dad, fatherhood, overdoing it, parenting
Comments (0)