“Somebody needs to do something!” 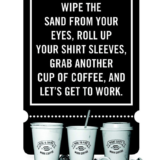 We’ve all heard it and we’ve all said it.  All around you and me, social interaction has become antisocial, if not scarce.  It is hard to not notice how decency, good manners, courtesy, mutual respect, and public decorum have all but disappeared.  In their place, people routinely say and do things that would’ve gotten their mouths washed out with soap–or gotten them socked in the chops.

“Why isn’t anybody doing anything?”

Once, we had parents willing to grab us at age 2 – 3, give us a hard stare, and make it clear we children were NOT in charge of our home and family.  We weren’t beaten nor did we consider ourselves abused by being occasionally popped on the pants to remind us we weren’t the boss.

Once there were dads and moms dead-set on reminding us mouthing off to any adult was the same as sassing them.  Respect for authority was expected.  It was The Rule that governed all of life.

Once we had parents who took seriously the task of training us as tots how to act in public.  We usually threw a Walmart or restaurant or church tantrum once.  Remember why we never tried that again?

“Someone needs to do something!”

Correct.  The question is “What?” and “How?”  In a world where its become increasingly necessary for free citizens to go armed, is there a way to climb back up on that nobler, better path?

Glad you asked.  Here are 6 ways to make some little things BIG again. 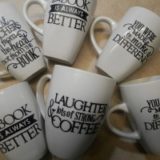 Tip your server well; tip with cash, and hand it to him or her, with a personal compliment.  This takes a little planning.  Yet often when tips are included in the use of credit cards, the server may or may not receive their entire gift – or someone else conveniently intercepts it.  Put yourself in their position; treat them as you’d want if you’d just given excellent care and service to someone else.  Food service employees are usually paid below minimum wage, since their bosses figure they’ll make tips.  Great theory, right?  Only problem:  many diners don’t tip, and even more don’t tip well.  If the service isn’t good, use your judgment about tipping.  Rewarding lackluster or rude service doesn’t work, either.

Return your shopping cart.  Sure–grab someone else’s, too.  “Oh, right!  Like taking your buggy back to the RETURN CARTS HERE rack is going to turn our social ills around?”  You’d be surprised.  Remember how irate you get when you’re pulling into Kroger or Safeway, see an open parking spot three spaces from the entrance, and start to pull in when confronted by a shopping cart parked right there in car-scratching country?  Uh-hunh.  The Grinch has nothin’ on you.  This is a tattered remnant of that old rule:  Put Things Back Where You Got Them.

Pick up the trash.  Once again, back in the day our parents taught us not to throw trash on the ground.  And when we saw any, to pick it up and toss it in the nearest garbage can.  Ask yourself how it makes you feel when you’re sitting in your car at a stoplight, or next to someone parked at a store, and you see the person in an adjoining car toss a scrunched lunchbag out in the street or parking lot.  A few choice thoughts, maybe?  Who wants to have to clean it up?  Out for a walk, or headed into a store or place of business, it only takes a few seconds to grab up that garbage cluttering up everyone’s world.  Besides, it’s downright neighborly.

Hold the door for the person behind you – and say “Thank you” to those who do it for you.  “Seriously?”  You bet!  I know we were raised to do this, and learned it by example.  Everybody did it.  Now?  You’ll like as not be sneered at, called a name, or looked at funny as they purposefully open the other door and walk in.  So be it:  make the effort.  Enough others will appreciate it that it will make the day for you both.

Let someone into your lane.  Oh, I know.  I hear you saying, “…EXCEPT for the jerk in the kidney-colored minivan who knows the lane is running out, and still tries to force his or her way in!”  Karmic retribution, right?  But as a rule, The Golden Rule being practiced on the highway is a pretty good way to begin restoring a foundation of Good, Right, and decency to our daily lives. 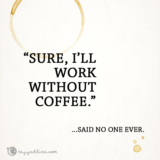 Make a habit of doing small, kind acts; they have a ripple effect.  No.  You likely won’t ever see them.  But if you and I and him and her over there keep doing this, we’re bound to begin noticing the cumulative effect.  “What kind of small, kind acts?”  Be creatively thoughtful.  You’ll notice things that you know you’d appreciate if they were done for you.  Start there.  Compliment a harried young mom on her cute baby.  Pay for a couple extra cups of coffee at your fav restaurant for someone who may need one and can’t pay for it.  Mow your neighbor’s lawn.  Go online and greet somebody who’s been on your mind.  You’ll think of something…

So.  There you have it:  6 TREMENDOUS WAYS TO MAKE ‘LITTLE THINGS’ INCREDIBLY BIG again.

Well, and coffee, yes.  Without saying.

Work?  Sure.  Anything worthwhile takes an effort.  And you may wind up doing it alone, even being laughed at.  No question, it will take time.  Yet you keep doing the right thing long enough, and soon others begin to recognize its value.  Soon you’ll have company.

And that, friends, is how we begin turning things around.