I sat sipping some great Ruta Maya medium roast and reflecting on the call I just got from Sparks.  And dabbing.  Somehow, a little of the coffee was spilled on the sleeve of my flannel shirt.  No idea how that might’ve happened.  However, the irregular blob of ochre brown, though complimentary to the barn red, caramel and antique white of the shirt’s plaid, just did not work.  The shirt was offended.

The previous sip gave credence to Jaqueline Susann’s title, so I indulged myself in another. 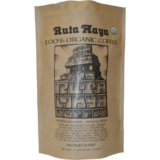 Reporters in my experience are pretty much one of two kinds.  Either they’re basically lazy and spend most of their time copying others’ work while adding their byline, or they’re part of a vanishing breed:  well-read cynics who’d never intentionally plagiarize on a bet; who do their own digging, and write as much from their own heart and instincts as they do from ‘just the facts, ma’am.’

I’d known Glennis Witherspoon for ten or eleven years.  In my experience, she was one of the latter.

That was what gave me the willies at her request to interview me.  Pondering never got me into any trouble.  I decided to ponder a bit longer.  It didn’t hurt that I had stopped at a new place that just opened, Dough See Dough, on the way in and bought four Boston crèmes.  Pondering always goes better with Boston crèmes and fresh java. 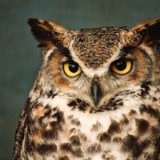 Leaning back, I swallowed another mouthful of coffee, munched an oozy bite of delicious pastry, and eyed the stuffed, mounted Great Horned Owl somebody’d left mounted on my office wall when they moved out.  Whoever had done the taxidermy was a master; I’ve seen these beautiful birds in the trees once or twice, and this specimen’s black/white/gray/brown/tan plumage had been expertly touched up until the bird seemed alive.  I always expected to see the old boy slowly blink and turn his head.

He didn’t.  He just sat perched quietly on the piece of sealed tree branch and stared back at me.  Lotta help you are, bird.  Arlough, whose mind often reminds me of a hummingbird’s sudden flitting, once asked me how I knew it was a male.  I was busy doing something else and just answered the first thing that popped into my mind:  “Because if it was a female, they’d never have caught it with its mouth closed.”  Cracked him up, and after we both stopped snarfling, we agreed it was the best possible answer.  We also agreed we’d keep that answer pretty much between us.

I agreed with myself it was time to get down to some serious sipping and rumination.

I was troubled.  Glennis Witherspoon wasn’t someone I considered a pal, but we’d been at least professionally friendly for most of the time since we first met.  However, we didn’t travel in the same social circles.  Trying to come up with her rationale in seeking me out right now, of all times of the year, had as much chance as my successfully learning trapeze performance online.  Maybe less.

Mine social circle has always been fairly small and tight.  I know and am friends with many, yet am disinclined to spend hours each week attending this or that social function merely to be seen.  Worship and church activities, and the occasional concert or movie, and I’m fine.

But I’m no hermit.  I’ll meet any friend, or anyone referred by a friend, at hat’s drop.  If coffee’s involved, I’ve been known to toss the tam o’ shanter myself.  The point:  Glennis has always known where – or at least how – to find me. 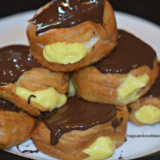 She held a concealed carry license for hi-capacity facts, and always had plenty of reloads.  The woman had long since earned her professional creds in the bleak, rapacious world of modern media reporters.  I knew Glennis could have contacted me at any time.  I knew she’d built her reputation on being forthright and to the point without being brutal.  I knew I needed another Boston crème.

Okay, ‘needed’ might be stretching matters.  I did enjoy it, though.

So why now?  Sitting for another few seconds, I realized I’d been just delaying getting back to her.  If I didn’t, it would only pique her interest.  I’d always been taught piquing is wrong.

“Eagle Online, this is Glennis.”

I told her who I was.  “Can you help me understand why you’d have any interest in interviewing me?  That has to rate right up there with watching a snail clean the inside of an aquarium.”  Lighthearted and carefree.  That’s me.  Just friendly, smiling old Granger.

If she was smiling, it wasn’t in her voice.  In fact, she sounded, well, cautious.  Respectful.  I was not expecting that.

“— I’ve been hearing different people’s accounts how you’ve helped them.  There’ve been—”

“Excuse me?  From whom?  And how many?”  This is the absolute antithesis of who I am and what I do.  Where’s she getting this?

I made no effort to soften the steel in my voice or words.  She could tell I was riled and quickly backed up.

“As I started to say, there’ve been seven I can recall offhand, and these are all men and women who impress me.  Anyone who could earn their praise would need to themselves be  an amazing person.  Every one of them agree you are that at a bare minimum.  And, look, Mis–Granger, every one of them had to be begged!  None wanted to talk, all were protective of you, and all were VERY reticent to say much of anything.  Please!  If you’re willing, I’d like to spend some time with you and better understand why you’re as effective as you are.”

I was quiet.  I’ve never done anything for anyone with being noticed in mind.  In fact, it bothered me any of the folks I’d encouraged and helped across the years would share their experiences with anyone, let alone a reporter.  To a greater or lesser degree, we’d worked our way through some heavy stuff.  I couldn’t imagine any of them divulging anything to a reporter, of all people, even one with Witherspoon’s rep.  With a few cases, we still were working through some things, off and on, in a few cases.  It wasn’t cheap tabloid material, and it made me uneasy to think any of it might be somehow compromised.

When confronting the unexpected and unknown, I react in silence and withdraw to evaluate.  I pull back, get quiet, and start thinking my way through whatever it is.  To those unused to stillness, it can be alarming, even threatening.

“You’ve got me at a disadvantage, Glennis.  I’m surprised any of those with whom I’ve interacted would talk openly.  I didn’t reach this place of service in my life by being loose-lipped.  Therefore, I must decide what to do with all this . . . and you.”  The newshound quietly admitted she’d been doggedly persuasive, saying she’d told them all she wanted was to honor me for years of unsung service.  In her favor, she sounded as though she was already regretting being so adamant, and even slightly misleading.

“I never meant any offense, Granger.  I truly am focused on knowing more about the inner you, what makes you so effective.”  To her credit she sounded honestly contrite.  She also sounded like she was being honest about wanting to honor me, not victimize me and jeopardize my longstanding relationships with these friends.

Stale Boston crème is underwhelming compared to a fresh one.  Nevertheless, a stale Boston crème is better than none at all.  Finishing the last bite and washing it down with now-lukewarm coffee, I spent a couple more seconds thinking through all this.  As I thought, I scanned again across some song lyrics I’d been writing and rearranging . . .

Well, you’re not supposed to worry

‘bout being in a hurry

To grow to be a BIG, BOLD SAINT

To just be good an’ steady

So you’re always good an’ ready

To be everything you AIN’T.

Now, Jesus is Who said it

And I know you’ve probably read it

That we’re all supposed to be GROWIN’

But when somebody dings ya

And their acid gossip wings ya,

Doin’ kind of lags behind the KNOWIN’.

Huh.  It was that gossip deal that got my attention.  I didn’t – don’t – want to be responsible for any of that.

I’d kept Glennis Witherspoon in suspenders long enough.  To her credit, she’d been respectfully quiet, waiting on me.

“Come by my office Monday morning at 8.  I’ll clear my schedule until noon.  You can enlighten me further at that time what you have in mind.”

Taken aback, Witherspoon stammered, “Well, I’m—set up in my office with every means to record and videota—”

“You won’t be recording or videotaping anything.”

I told her everything – the entire interview – would be off the record.  I mentioned she’d said her purpose was to get to know more about me, and that she needed neither device for that.

“See you Monday morning at 8, Glennis.  Bring donuts.  I like Boston Crèmes.”

Eagle Online staff later recalled seeing their ace reporter sitting still before her blank computer screen at 5:17 PM.  They all agreed they’d never known either of those things to happen in the entire history of ever.

Posted under Common Sense,Encouragement,Humor - Lighten Up and tagged with dialog, humor, storytelling
Comments (0)