Words are like keys. If you choose the right ones, they can open any heart and shut any mouth. 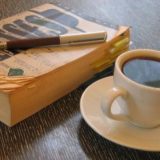 Ever sat in one of your favorite coffee shops or restaurants, minding your own business?  Perhaps enjoying a great cup of joe and reading, or sitting with a blank notepad while freethinking?  Maybe even staring off into Middle Space, daydreaming?

You know how frustrating it is when the inevitable happens:  a conversation from an adjoining table mugs your pleasant peace of mind, causing you to want to offer in return a piece of yours.  And isn’t it odd?  That conversation isn’t low-keyed or gentle.  The volume seems to bully the sacred airspace encircling your spirit, all but forcing its attention on you like that oily-haired neighbor’s teenage Legend-In-His-Own-Mind constantly leering at anything passing by with a remote resemblance to feminine gender.

Your ears sharpen.  Something one of them says reminds you of a similar experience.  At the very least, one or the other is constantly talking over the other, indulging in the control-driven, self-absorbed habit of finishing (or trying to finish) the other’s sentences.

Or one resorts to the eventual reserve of all such orations:  he or she gets dirty.  Crudely, intentionally coarse.  Filthy.  Profane.  Every third or fourth word refers to this or that sex act.  Humorous derision morphs into stinky, ugly epithets that once earned at least a fast smack in the mouth, and at most being decked and left to awaken later.

Your ears are rose-tinged and looking and perhaps even sounding a little like those funny-looking steam release valves on a pressure cooker.  You’re locked and loaded, fully prepped to read to the offenders from The Book.

Necessary?  Yes.  Yet in the right way.

This morning’s news cycle reveals our cherished bastions of American university training are allowing students to cite their refusal to read literary classics because they were written by Caucasian old white men.  Chaucer.  Spenser.  Shakespeare.  Wordsworth.  Longfellow.  Forget the great thinkers and orators of Greece and Rome.  Proclaiming freedom from racism, these ‘students’ have become the most virulent strain of racist imaginable.  Proclaiming themselves the Universal center, they proudly strut before cameras and mics during class time, telling in slangish, putridly profane terms, how anyone unlike them cannot have any value and whose words will be ignored and shouted down while physically degrading any who dare to present a divergent view.

In other words, liberal lightweights posing as professors, themselves sounding more like strident, egoistic, jealous, vengeful 7th-graders than university educators are letting the half-grown animals take over the zoo.

And that, friend, is the smelly petrie dish from which the conversationalists at the next table have been grown.

Yes.  Espresso yourself.  Just do it with wisdom and patience, for you will be speaking in proper English when they’ll be listening through a filter of the bastardized mishmash of Americanese passing for communication in their world.

If you dare, say something like, “Excuse me, but it was difficult not to overhear your discussion.  May I join you for a few moments, and would you like a refill?”  They’re going to do owl-eyes, for they’ve already ID’d you as ‘One Of Those’.  But who turns down a free latte?  There’s a sucker born every minute, right?

You’ll be tempted to sink into the rhetorical slag and cloying, greenish bayou of their level of speech.

You’ll be tempted to raise your voice from Voice of Reason to T-Rex Breath to attempt to keep up with them.

Don’t.  If necessary, gently disengage with, “I’m sorry.  I had the impression you were interested in an honest dialog.  My bad.  Please excuse me – enjoy your coffee.”  Then leave, even if one calls after you.  Tossing pearls and all that.  The next time one of them happens across you, or someone like you, they’ll be more apt to listen more than talk.

They need to hear someone who looks a lot like them articulate exactly what you believe and why you believe it, without calling them names or calling into question their ancestry.  They need to observe a humanoid biped resembling them both, speaking coherently while presenting a differing point of view – and doing so while honoring their viewpoints and being willing to listen well enough to repeat those points back to them.

It is not necessary for us to agree.  It is absolutely vital we make the effort and take time to listen to each other long enough to discern the real feelings from regurgitated talking points – and sufficiently enough to understand where lie our honest differences of policy and opinion.  It’s imperative we stop allowing individual opinions to redact Truth.

It might be immediately easier.  In the long run, you’re only delaying the inevitable, kicking the convo down the street, if you will.  You’re also continuing to feed your own reticence to take a reasoned, polite, titanium-backboned stand for Being Decent In Public 101.  They need to see and hear that somewhere, for they certainly are not getting it in return for the bloated, obscene amounts of money they (or someone) will have paid for their ‘education’. 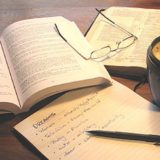 I often free-write.  It’s amazing what unrolls from my thoughts that have had all night to run free.  Yeah.  Free Range Ideas.  I’m adding this from a couple of weeks ago to show how face-scrunching and irritating it is to be enjoying great coffee and a great book and have someone’s nasally-resonant conversation, either in person or on the phone, jaggedly intrude.

“. . . Things come tromping through the memory like unplanned-for backwoods in-laws, plopping their baggage down in the middle of your peace in a roiling, sneezy cloud of dust.”

Yeah.  You’ve had it happen.  Somebody standing behind you in Walmart, prodding your backside and Achilles tendon with their cart, oblivious to Earth as they raucously blab with someone named Arch in Tallahassee.  St. Louis would at least make a little sense.

Take a breath.  Marshal your thoughts.  Consider the times you’ve unwittingly done that to someone else.

Then do it.  Espresso yourself.

I’m just guessing here, but I suspect you’ll receive more than one grateful glance from others needing the empowerment to do the same thing.