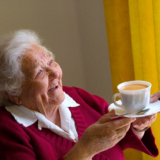 The old woman in Room 9 of the geriatric ward of the small rural hospital had finally done the staff a favor and died.  When it was clear she’d never leave that room alive, her daughter and son-in-law drove in from out of town and quickly, dispassionately sifted through her accumulated junk.  It was what was left of 90+ years of life.  Those trinkets and broken this-or-that meant something to her.  Its only value to them was how much could be recycled, so they wouldn’t have to pay so much to throw it all away.

Each time she’d ask them what of hers they wanted, they’d gently tried to remind her:  “Mom, we’re not sure how to tell you this, but all this stuff that has such meaning to you?  We won’t want it, and I can guarantee Jewell won’t.  Keeping parents’ stuff was a ‘thing’ when you were young.  It’s not now.  We’re not wanting to hurt your feelings, but we really don’t want this stuff.”

On the day they got the call her mom was terminally ill, Heather and Drake never blinked.  They drove straight to the lawyer’s office whom they’d retained to handle Eunice’s final affairs, signed the papers committing her to what passed for a nursing home, picked out a few things they thought might make the ugly, plain little room’s walls a little more palatable, and took them over to the hospital. 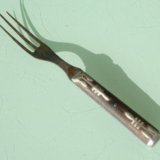 A grandson’s high school letter off his varsity jacket . . .  the birth announcement of Shelby, the old woman’s first great-granddaughter . . .  a ratty, fray-edged and obviously handsewn pillow she’d made, half from Stan’s favorite old work shirt, and half from the dress she wore when they were married . . .  the crudely-framed picture of the house Stan built in the evenings after work, which became their first home . . .  an old, wooden-handled three-tined table fork that was from the set she’d collected in boxes of laundry soap.  Stan gave her the house as a wedding gift; she gave him a full set of flatware and plates she’d collected and saved.

Eunice.  Her name was Eunice, and Heather was her daughter and had held power of attorney for her ever since her mind began its slow, inexorable tornado-like spiral down in to complete memory loss and total confusion.  She and Grant really didn’t want to be bothered with any of it, but they were closest.  Besides, though older, Jewell would do nothing but complain.  The lawyer’s name was Evans, and the young, preoccupied doctor who briskly came in, checked her vitals for the required amount of time, then pronounced her at 0438 was Shaunessey, Joe, O.D.

The hospital staff, especially housekeeping, didn’t care.  They just knew her as The Crabby Old Lady.  They needed to get in there, clean out her meager belongings and box ’em up for Heather and Grant – as if they wanted any of them – and prep it for the next crabby old man or woman.

They’d taken everything off the wall and picked up everything else, when one thought to look in the bed stand drawer.  There was an old Bible there, with what looked like a bookmark in it.

“Will you hurry up?  Lunch here would gag a yak at the best of times, but maybe if we get to the front of the line—”

The orderly standing and holding the Bible had just opened it, curious to see what The Crabby Old Lady had marked.  Slowly, he sat down.  It wasn’t a bookmark; it was a folded sheet of legal-sized paper.  The old woman had written on it, and her thoughts were profound enough that the staff typed it up, printed it off, and distributed copies to every nurse, RNA, and orderly in the hospital.  Here is what Eunice had written.

What are you thinking, When you’re looking at me?

Uncertain of her routine, with faraway eyes.

Who dribbles her food and makes no reply,

When you say in a loud voice, “Well, you could at least try!”

Who seems not to notice the things that you do,

And forever is losing a sock or a shoe

Who, resisting or not, lets you do as you will,

With just bathing and feeding her long day to fill?

Then open your eyes, nurse, because you’re not looking at me.

I’ll tell you who I am as I sit here so still,

As I mutely do your bidding and I eat at your will.

I’m a small child of ten with a father and mother,

And brothers and sisters who laugh and love one another.

I’m a young girl of sixteen with wings on her feet,

Dreaming that any time now, a lover she’ll meet.

A bride soon at twenty, my heart gives a leap,

Remembering the vows that I’ll promise to keep.

I’m twenty-five now, I have young of my own,

Who need me to guide them and make them a happy home.

Bound to each other with ties I pray will last.

At forty, my young sons have grown and are gone,

But my man’s beside me, to hold me when I mourn.

I’m fifty, and once more babies play around my knee,

Again we know the giggles of children, my loved one and me.

Dark days are upon me now, for my husband is dead,

I look at the future, and I shudder with dread.

For my young are all rearing young of their own,

And I’m left to think of the years and loves that I’ve known.

I’m now an old woman, and nature is cruel,

To make me in old age look like a fool.

The body, it crumbles, and grace and vigor depart,

It feels like there’s now a stone, where I once had a heart.

But inside this old carcass, a young girl still dwells,

And now and again, my battered heart swells.

And inside here, I’m loving and reliving life all over again.

I’m thinking of the years, all too few, gone too fast,

And accepting the stark reality that nothing can last.

So open your eyes, people–please, open and see:

No one from the hospital staff were asked if they’d read the poem.  There were no dry eyes.  Even the self-important, preoccupied young doctor was sniffing and blowing his nose.

Normally a perfunctory, even distasteful task, the orderlies didn’t say much as they gathered up the old fitted sheet from Eunice’s last bed, loaded all the stuff to be thrown away in it, and made the trip out to the dumpster.  Where they usually just tossed the whole load in, throwing their sterile gloves in after it, this time they kind of laid it softly on top of the pile.

On top was a faded, embroidered purple letter ‘G’; a folded card of some kind; a kind of weird, mismatched, faded old pillow; an old metal-and-wood table fork with garden string tied through a hole in the handle; and on top of it all, an old, black-and-white picture of a small, homely old house that the frame had come off of while they were tossing it into the throwaway pile.

Leon and Rocco looked at the small pile that represented Eunice’s Earthly life for a minute, then made eye contact.  Leon said, “Hey, what about her Bible?” 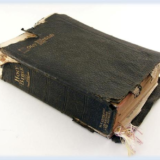 “I kept that.  I didn’t figure she’d mind, and those two kids of hers sure never acted like they’d want it.  ‘Sides, a few years back after I got out of the Corps, I threw mine into the nearest river.  I kinda figure this is God’s way of replacin’ it, and my way of sayin’, “I’m sorry” to Miss Eunice for not bein’ more pleasant when it woulda mattered.”

Leon was quiet for a few seconds as he held the hospital hallway door open.  “We see this stuff all the time, Rock.  What was different here?”

Rocco shrugged.  “I never knew my mom.  Don’t know who my gramma was.”  He shifted his head towards the dumpster.  “Miss Eunice’ll do.  Hey–d’you think she’d mind if I sorta rescued the picture o’ that old house?  She’s family, now, and it’s got some meaning attached to it.  She’d want me to have it, me bein’ her grandson an’ all.”

Leon smiled.  “I’ll go on in and start washin’ down the room.  Gotta have it nice and clean for our next grams or gramps.  But I don’t plan on doin’ it all by myself, hear?”

As the door closed, Rocco turned and the morning sun glistened off the big tears flowing down his cheeks, the first time he’d cried since rotating back from his third tour of duty in Afghanistan.  Groping in his scrubs pocket for his handkerchief, he muttered to himself, “Maybe I’ll just hang onto that old pillow, too.  There’s got to be a story, and–”  here he glanced up into the clear sundrenched sky– “Miss Eunice, if you wouldn’t mind, sometime let me know what that story is.  We’re family, now, and I’d like ta know.”