Her given name was Joella Jane Boone.

She was a Boone in many telltale ways:  a lifelong learner holding two Master’s degrees in education yet whose greatest joy was teaching in the school classroom, and who loved to write on white- or blackboard in a lovely, effortless cursive; artistic to the point she could do nothing plainly; articulate and precise in her speech and grammar; and had a velvety, almost sultry alto voice she used in sacred solo, small ensemble and choral work her entire life.  There was nothing mannish in her.

It was no surprise she’d catch the eye of, and later marry, William Tromble, Ph.D., himself a musician, educator, and in later years active in university institutional advancement.

Jo was a Boone in the other necessary ways, too.  She knew how to kill and dress chickens and small game animals, how to grow and tend both flower and vegetable gardens, and how to milk and clean up after cows.  Jo was at home on forest trails, and our dad often found her tracking a deer or hunting blackberries by herself.  She built good fires, knew how to prepare meals over them, and how to properly extinguish them.  She knew how to tell relative time by the sun’s position, could wield an axe as well as most men, and was an accurate shot.

Jo and her two closest siblings were about twenty years older than I.  That means by the time I was born, they’d already been married and gone, and I was a preemie uncle by 3 months.  When I was born, my mom was 42 and was finished raising her family.  To add insult to exhaustion, I made my debut on Mother’s birthday.

Since both her siblings already had families, it was Jo who came to be with our mother prior to, during, and after my birth.  She spent so much time holding, cuddling, and feeding me, she said, that I’d cry whenever Mother took me from her.

From my earliest memory, Jo always sent me cards, and always embellished inside with ink artistry of some kind.  Shading.  Perspective.  Something.  And always with a handwritten note folded and tucked inside in her stunning cursive.

After my freshman year of college I could find no suitable work in North Idaho and was exhausted by driving 60 miles daily into (and back from) Spokane, Washington to work and to computer programming school.  I held on for two reasons:  I hate not finishing something I’ve started, and Jo kept writing and encouraging me to keep going.

When the school folded, there was no incentive to keep making that drive.  That was when Jo suggested I come back to where they were in Kankakee, IL, and try there.  She said I could stay with them while hunting work.  At her suggestion, I auditioned for and locked in a spot and associated scholarships on the university’s main quartet – IF I could come up with the money for the sophomore year.  Once again, I did odd jobs, even painting Olivet Nazarene dorm rooms.  Alas, in ’71 and ’72, there were no good jobs available for those my age.

I’d had enough.  In June, I went down to the Air Force recruiter, chose a career, and enlisted under the delayed enlistment program.  Jo took me in until I shipped out in September of ’72.  All during my USAF years, and since that time, she never forgot to send her signature cards.  There was no doubt who’d sent them, for no one else I know had either patience or ability to make them pop like Jo.

It was from Jo that I picked up the habit of cleaning as I go.  Cooking.  Cleaning.  Mowing.  Weeding.  Writing.  That makes me a little slower, yes.  But there’s rarely any mess or empty stuff laying around for others to have to pick up after me. 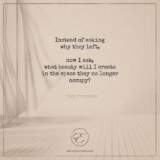 My sister Jo was always very verbal, often wearily so.  She could wear a political strategist down with her word-gusts.  Yet buried within the lush bouquets of her verbiage, there were always-always-always words of personal encouragement, of assurance to me of her faith in God, and her support that I keep mine strong as well.

My big sister, Joella Jane Boone Tromble, is gone.  We received word Saturday of her passing.

They say grief is just love with no place to go.  They’re right.

After years of dealing with other patients, and other families’ grieving, I’m numb right now.  I didn’t expect to feel this way, for I never lived close enough to Jo and Bill to spend any time with them until those few months prior to serving in the Air Force.  I didn’t expect this deep, resonant, echoing emptiness.

It hurt when I lost my mother.

It’s hurting now that I’ve lost my other one.

I loved you, big sister.