I was tired to begin with, so when I got Mom’s call I wasn’t very gracious.

“You want to what?  Today?”  She’d been putting off going through my step-dad’s stuff, and I guess I’d gotten used to her kicking that particular cannister down the road.

“I know, honey.  It’s just that I’ve been delaying this and waiting ’til a good time.  I guess I finally realized there isn’t a good time.  I mean, Jerrold’s been gone a year already, and, well . . . ”  I stood shaking my head in frustration.  The stack of things I needed to do, errands needing to be run.  I guess getting Bart to the vet for his annual shots could be postponed, and Junelle’d have a couple dozen Snickerdoodle Supremes for the volleyball boosters on Saturday instead of today.  The rest of my To-Do list would just have to switch to Not T’day, Eithers.

“Sure, Mom.  Put the coffee on.  I’ll head that way.”  I think I kept the resigned whine out of my voice, although I confess I kind of gritted my teeth, but would’ve sworn I was smiling if anybody’d seen me.  I spent a little time trying to rearrange schedules and appointment times, then grabbed my keys off the counter.

Want me to be honest?  It hacked me off that Veradean and Shiryl weren’t there when I arrived in Mom’s driveway.  I mean, they were Jerry’s real daughters.  I never knew my real father, who’d abandoned Mom when she was pregnant with me.  I was 9 when she married Jerry, whose first wife had died when my two step-sisters were in kindergarten.

As I wiped my shoes on the old bristley, homemade welcome mat before going in, I reflected it was just as well neither of them were there.  I never have fit in with them.  They made it clear Jerry was their dad, not mine.  Both of them have, well, pretty faces and nice bodies, so their social calendar was always full from middle school on.  They never once asked me to go with them, they never wanted for anything, they—-

Enough.  I suddenly realized I’d been standing there, kitchen door ajar about 4 inches, the tantalizing aroma of Mom’s monkey bread making perfect scents when combined with the fragrance of just-brewed coffee.  I was letting two absent women keep me from being with my Mom.  She and I look and sound a lot alike, and until Jerry was in the picture, she and I were as close as we could be and not be joined somehow.

“There you are.  I was afraid maybe you wouldn’t be able to make it, after all.”  She was watching me as she slid a mug with “Grand Tetons” on it over to me, brimming with fresh coffee.  She was more aware than either of Jerry’s girls how I’d never felt part of their lives.

“Oh, no, I just had to switch some times around and—”  The tablecloth.  It was once white and green checks, though it was now faded and still had that stain I remember from where Veradean had broken Jerry’s fountain pen while playing with it.  I remembered the vinyl tablecloth from my childhood when the five of us used to sit around the table playing board games every Saturday evening.

Mom softly smiled.  “I wondered if you’d remember it.  To be honest, I’ve already pretty much gone through your dad’s things.  I wanted to spend a little time with you, since I just have a couple more boxes of—”

“You mean Jerrold?  Well, since I’m here, pass me one of them.”  I noticed Mom’s hurt look, but tried to overlook it as I pulled the folded-over flaps of the cardboard box open.  There was the usual hodge-podge of stuff a man collects across his life, and I did try to be discerning as I separated the savable from the doomed.  I thought I’d emptied it, and lifted it to toss over by the door when I heard and felt something else inside it. 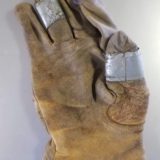 Upending the tattered box, I saw an old glove fall onto the table.  Definite yuck.  Curling my lip, I looked to see if the other one was in there.  Nope.  One glove, the right one.  It was a man’s leather work glove, soiled, stained, lacerated and patched with signs of a lifetime of labor.  I was about to drop it back inside the box before tossing both over by the door when I glanced up and saw the rapt, almost reverent look on Mom’s face.

“What?!?”  I’d rarely seen Mom look that way except in church.  “It’s a dirty, patched old leather glove.  One … glove.  What possible use could it have?”  The patches were equally tattered and threadbare duct tape.  It was ugly and by itself.  What possible use, indeed.

Setting her half-empty box aside, Mom sat there eyeing me and sipping her coffee.  Right then, her eyes seemed like they were about four hundred and thirteen years old.  I knew there were things she knew she wasn’t telling.  I knew she was deciding if it was worth her time to bother.  I knew when it was time to shut it and listen.

“Arlene, do you remember that prom dress you just had to have your senior year of high school?”  Uh-oh.  Mom calling me by my given name is bad ju-ju.  And I did remember the dress.  I also remember the complete jerk I made of myself until I got it.  I’ve always found silence to work great.  It did this time.

“The man you call ‘Jerrold’ somehow heard about it.  Without saying anything to me, he took a second job, working evenings part-time in his brother’s machine shop, to earn enough extra so I could buy that dress you just had to have.”  I was chastened, but still puzzled about what that had to do with this oily, grubby, duct-taped old glove.  Mom saw my bewilderment and pounced.

“The man you call ‘Jerrold’ was required to wear gloves on his second job, but couldn’t afford both a new pair of gloves and still help me buy you your prom dress.  So he took his old gloves, cleaned them up as best he could, and used duct tape to patch the holes in them.  When he told your uncle why he was doing it, he let him use the taped gloves.”  I couldn’t keep it totally shut.  It’s a downfall of mine.

“But why is there only the right one?”  She pounced again, harder.

“One night they were doing a last minute job.  The man you call ‘Jerrold’ was tired and somehow got his left glove caught in a spinning drill press.  He managed to hit the ‘kill’ switch and save his hand, but the glove—”   I was getting it.  I was still a little put off by that snarky way she kept saying, ‘Jerrold’ while waggling her head like that.

“The glove was torn up and had to be trashed.”  Mom just nodded with that look only Moms seem to perfect that’s like how a cougar looks just before it enjoys lunch.  Since silence worked so well before . . .

“Without both gloves, ‘Jerrold’ couldn’t keep working there, so he borrowed enough from his brother to help pay for the rest of your prom dress.”  I sat there, a congealed puddle of greenish-yuck remorse.  I seriously didn’t know what to say.  I’d always thought he was staying away because he didn’t like me; and that Mom had saved up the money for my dress from her sewing she did on the side.

In a barely-audible voice I twice had to clear, I mumbled, “Did he hurt his hand very bad?”

“He was on light duty for a few weeks until he could use it enough to do his main job again.  Anyway, you can go ahead and throw it away if you want as you head back home.”

I sat there, thinking, as I finished my coffee.  Shaking my head, I said, “No.  I’d like to keep this to remind me that none of us ever quite knows the whole story, and we never quite know each other nearly as well as we ought to.”

Mom stood, too, and watched me put on my coat.  Gently picking up the battered and taped old glove, I looked her in the eye and said, “Thanks, Mom, for reminding me of my daddy.”

I loved the shocked look on her face.

It seems the karmic reservoir never runs dry, does it?