The November wind blustered and fretted outside the cozy diner’s windows.  That early in the morning, I was the lone patron.

I was enjoying my first cup of Jimmie’s great coffee as I gathered my thoughts and began to write.  Trixie was keeping my cup full with her usual attention to detail that made her one of the finest servers I’d ever had the pleasure to know.

Her deep blue poodle skirt and pink bobby socks contrasted the burnished mahogany of her skin.  A hot pink scarf tied in a bow completed the ensemble for which Jimmie’s Diner had been known since its inception.

Trixie quirked an eyebrow.  “You rather I didn’t have any on?  Can’t show up here ‘thout big, dangly earbobs, as you call ’em.  I was in a hurry, and these turquoise ones were close at hand.  Deal with it.”  The cook whistled his trademark three sharp blasts, signaling my food was ready.  So was I.

Sipping coffee, my mind refocused on my writing notes.  Increasingly, I found myself always having something encouraging to write, even when not working on a specific project.  It seems there are so many individuals struggling with life burdens; there’s always some lifting of someone else’s spirit to do . . .

“Here you go, dear.”  Trixie laid the food before me, including the extra napkins.  The steam rising carried the tantalizing aromas of eggs, potatoes and hamburger steak with onions fried into it, making my empty stomach mutter in anticipation. 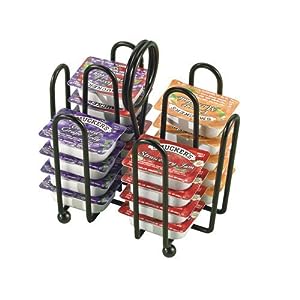 I’d just poured hot, creamy hollandaise over my country potatoes and was searching through the little wire jelly holder when she returned with a brimming pot of fresh coffee, topping off my cup.  She stood there as I pulled out the eight or ten little plastic rectangles.  When she’d had enough fun, she reached into one of those pockets the Jimmie’s servers always had on their aprons and pulled out four packets of peach jelly.  Wordlessly, but smirking, she held them out.

Now I squinched my eyes up at her.  “Anything you don’t keep in those pockets?  I heard you had your lunch in there last week, and somebody said you park your Smart car in there so you always have your own parking space.”  We shared a good laugh, her rich alto filling the space around us.

“No Smart car for me, man.  Hunh-uh.  I want some room for these bones, and no Smart car gonna cut it.”  She took the coffee pot back to its warmer, still chuckling to herself as she crossed the small diner’s interior back to my booth.

“I’m looking forward to reading the book you’re working on about your healing.  Just being around you, I can tell the story’s one I need to know.”  Her eyes scanned the room, assuring she wasn’t ignoring another patron who might’ve wandered in.  They hadn’t.  She wasn’t.

I sat back, thanking her.  “I suppose I was as naïve as anyone else when I began, thinking this a cakewalk.  I like to write.  Actually, I love to write, so . . . ”

“So you figured it’d be a few months’ worth of work, and BAMMO.  Instant book.”  I sat observing her expressive eyes, holding a knowing wisdom belying what some thought her humble job to be.  I knew better.  Trixie, which was one of the stage names each of the Jimmie’s servers adopted, held a bachelor’s degree in economics and was an avid reader.  I just nodded.  “It’s been years.  And the story just keeps building.”

Stifling a yawn, I caught her amused look as, comically wide-eyed, she mimed hurrying to refill my coffee.  I’d just started to say, “But turquoise?  Really?” when I noticed movement at the diner’s entrance.  Jimmie’s has a small foyer of sorts with two short benches in it, and a man had quietly been sitting there.

He wore a well-used tan canvas coat with green and black plaid lining.  His wash-whitened jeans were torn at the left knee, though it looked like he’d tried to patch them; and an old black “MIZZOU TIGERS” sweatshirt completed the winter wear.  The visitor’s brownish-gray hair was a few weeks into needing attention.  When he saw Trixie and me looking his direction, he stood.

“I’m sorry.  I knew it’d be warm in here.  I’ll be on my way.”  His manner was dejected, but his voice was calm and well-modulated.

Something in his manner puzzled me.  Without thinking, I said, “Wait!”  I walked to the entrance where another couple with a kid in a yellow mohawk was just coming in.  “How about a cup of coffee?”  I gestured toward my booth.  His deepset, intelligent blue eyes evaluated me for a few brief seconds before he walked that direction.  This guy doesn’t do charity well.

I motioned for him to sit down as I looked for Trixie.  I needn’t have bothered; she was halfway to us with his coffee.  “Welcome to Jimmie’s.  I just brewed this pot fresh.”

“I don’t often have guests this early.  How about some breakfast?  I dislike eating in front of others.  My treat.”  Without waiting for an answer, I glanced at Trixie, waiting to catch her eye while she glared at The Mohawk Kid playing with the red ketchup squeeze bottle on his parents’ table.  At least I assumed them to be his parents.  I couldn’t fathom a sane couple picking that one for a family.  I bobbed my head toward my visitor.  She nodded, coming over and laying one of the menus before him she’d been standing there holding for the kid’s parents.

He scanned it, told her his choices, and surrendered the menu.  We both heard her tell the parents, “Here are menus.  I’ll be back for your order.”  I know Trixie.  She’d rather use a Dremel tool on her teeth than serve kids like the one with the saffron Mohawk.  He’d already managed to tip the glass sugar jar over, living up to his Calvin & Hobbes tee.

“This coffee’s good!”  His comment jerked my attention back where it belonged.  Hands cupped around the mug, warming up, he pointed with his chin toward the open writing pad and asked, “What are you doing?”  He raised his eyes to mine, waiting.  It was pleasant, being in company with someone who understands good communication techniques.

His eyes widened slightly as he looked up.  After a beat or two, his face darkened slightly and he remarked, “I’m afraid it won’t do much good for me.  It seems everybody who means anything in my life makes sure the past always trumps now.  It’s like they don’t want me to be new, to break away from who and where I’ve been  They’d prefer I stay within the box they’re familiar with.”

He took a big swig of his coffee, swallowed, then said, “Nobody believes in me.”  I’ve heard my share of petulant adults with little regard for anyone else’s feelings or thoughts.  I wasn’t hearing that.  He said it in a dispassionate, reflective voice, his brow unlined and face at rest.

Sometimes things pop into one’s mind unbidden.  I looked at him and said, “I do.”  Taking a big bite of juicy, flavorful meat and country potatoes, I sat observing him.  His food had come and he busied himself preparing it to eat.  I ate while he continued.  When he was done, he slid his fork beneath a big bite of pancake and then said, “Why?  You don’t know me and I’ve never seen you before.”

“I don’t allow others’ opinions to shadow my own instincts.  I’ve suffered enough judgmental fools and been misread and misunderstood often enough I know better than to let somebody else’s ideas color the reputation or backstory of someone I’ve just met.”

Trixie’d just refilled our coffee cups.  I sat appreciating its smoky, rich flavor for a moment, then finished my thoughts.

“I believe God’s able to take your Now and multiply it–just as He did with those dinner rolls and fish filets on that hillside.  Where or who you’ve been isn’t close to being as important as where you’re headed, and who you want to be.  To me, the real question is, do you believe in you?”

My visitor had been dabbing up the last bit of syrup with a final bite of pancake.  The motion stopped halfway to his mouth as he seemed to evaluate my words.

“Do you write the same way you talk?”  Interesting question.  I thought about it.

“Pretty much.  I’ve been around critical, judgmental people as well as some champion encouragers.  I’ve decided I’ve had enough of the former and am spending the rest of my life being one of the latter.  Everybody’s got bad decisions and rough experiences in their backgrounds.

“They don’t need yet another critic pointing out their faults.  In my experience, they do need people around them who’ll cheer them on, lifting and encouraging them when they feel like giving up.  Even if they need some coaching, it doesn’t have to be done like a Marine DI dressing them down, or a stern teacher addressing a fourth-grade class.  Sometimes people forget how patient others were with them when they were learning.”

The man had gone somewhere in his thoughts.  When I stopped speaking, his eyes remained wherever he’d been for a few seconds; then they refocused on me.  “Well, keep doing what you do.”  Glancing up at the clock on Jimmie’s wall, he suddenly rose and grabbed his coat.  “Thank you for letting me share your table, and for the food.  I won’t forget this.”

I allowed that it was my privilege, that I hadn’t done much.

His response startled me.  “You’ve done more than you know.  I must go now.”

His eyes took on a strange, shimmering intensity, seeming to pierce into my very soul as he said, “But I know yours.”  And with that he was gone out the door.

I sat there, stunned at the transformation.  Trixie came by to pick up his plate, so I asked, “Do you know him?”  Her face revealed her own questions.  “I’ve never seen him before.”  We both quickly walked to the window looking out on the parking area.  Beyond the two or three vehicles parked there, we didn’t see our strange guest.

Trixie’s a believer, and I saw the same dawning awareness in her eyes as she surely saw in mine.  She hesitated, then said, “We just shared something–someone–special, didn’t we?”  I said, yes, I believe we did.

The mood didn’t last long, though.  I saw her jaw tense as she said, “I gotta go kill me a kid or I won’t have a restaurant left.  And I may throw his parents in for good measure.”

I grinned as I slowly returned to my booth.  I had some fresh ideas to get down on paper, and this morning’s strange encounter whirled them around in my mind, much as the wind’s cold fingers were strewing double-handfuls of leaves around the parking lot outside.