Sometimes we do things that resonate in ways we never envision.

Yesterday, millions of people used every sort of eye-protective device imaginable to observe the long-heralded total eclipse.  Many invested money they didn’t have to spend, traveling for days they really didn’t have to give, to make the trip to places in the country where they could experience totality.

Totality . . .  A single picture of that event captured my creative spirit. 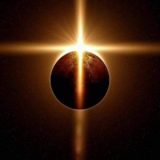 Somehow, the corona of 2017’s eclipse was superimposed on a reflection shaped like a cross.  Whether intentional or just another unexpected reflection from a camera lens, it can’t be ignored.

From 94.02 million miles distance, the sun’s radiance can destroy unprotected eyes staring at it from Earth.  This picture reminds me of the day the Creator of our sun and every other star in His universe hung suspended, bleeding out before a harsh, cynical crowd who’d come from all over for the show.  Most of them had traveled for days to get there, too.

What they saw was much more than any of them expected.  That day, God divided Time in half, forever exalting Jesus to be the singular focal point of all Time and history.

The corona of the eclipse was fascinating and unforgettable.  Yet that syzygy lasted no more than two minutes, forty seconds.

The crown God’s Son now wears gives totality a new meaning; it outshines any other source of light and lasts forever.

The Cross eclipses all.

Posted under Encouragement,Inspirational and tagged with crucifixion, Eclipse 2017, salvation through Jesus Christ, The cross of Christ
Comments (0)