They sat comfortably sort of sideways from each other, letting silence say as much or more than their conversation.  On the little table between them were two steaming mugs of fresh-ground coffee they’d bought in the Peets kiosk. Freedom and Responsibility went back a long ways.  Their desultory chatting was of the type two old friends engage in, stream of consciousness guiding their thinking.  As they sat watching the erratic flow of the mall’s patrons, the steam rising from their coffee teased the long, tapered leaves of live daylilies in the blue ceramic vase on the table behind the mugs.

Responsibility glanced over at his longtime companion.  “Not sure what 241’s s’posed to—let’s agree that—well, you do look a little ragged around the edges.”

Freedom slowly nodded.  “I imagine.  This—” here he nodded toward a gaggle of young self-absorbed stuff slouching past, dressed in trash chic— “is a long way from anything I ever imagined being done in my name.”  Resp followed his friend’s gaze, focusing on one girl proudly displaying a tee upon which was printed a message that would’ve gotten him whipped and sent to his room.  At least he thought it was a girl.  Besides, he was pretty sure her arrogant tee proclamation was a physical impossibility–certainly outlawed in yet a few states.

A grave look on his face, Responsibility picked up his cup and sipped the fragrant medium roast house blend.  “I was just reading that freedom never has been a free ride to do and say whatever you want, but instead always has been the opportunity to do and say the right thing.”  Glancing sideways, he surprised a haunted look in Freedom’s eyes as he watched yet another group of slightly older people amble past, most hunched over their ‘smart’ phone with the rest blabbing on theirs.

None seemed aware of anything or anyone else around them, each cocooned in invisible bubbles of blather and textual trivia.  Raising his mug to drink, Freedom kept his eyes on the continuing, endless stream of people.

“Do you think they have a clue what their shallow, superficial pursuits have ultimately cost us?”

“Those two do.”  Startled, Freedom slanted his eyes at Responsibility, then followed his narrowed gaze at two men passing in front of them.  Disparate in age, they could have been father and son.

Both walked erect, eyes scanning the crowd around them.  The gray-haired one wore comfortable, neutral shades, the only color being a deep blue USAF tee beneath an open short-sleeved outer garment.  The younger man was similarly dressed, wearing a dark red oversized “GOT AIRPOWER?” tee outside his gray cargo shorts.  Both had folding knives unobtrusively clipped inside their left pockets.

Freedom and Responsibility both had a good idea what was beneath the outer garments.

As the two old friends sat sipping their cooling coffee, the older man sensed their sharpened gaze and turned his head to look at them.  His eyes widened as he recognized Freedom.  Lightly smacking the younger man on the arm, he stepped over toward Freedom and Responsibility.  As if sensing something purposeful in his green eyes, the glittering, twittering crowd parted, letting him and his powerfully-built younger companion through. 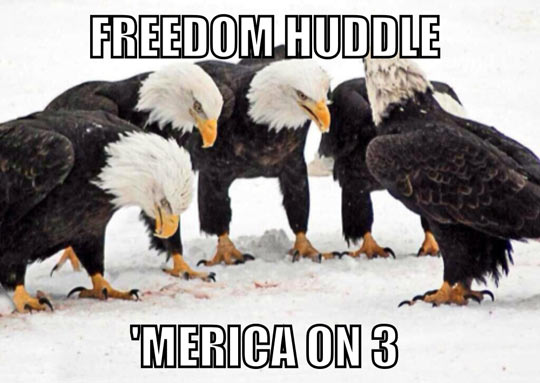 As they approached, the older man stiffened to attention, looked Freedom in the eye, and said, “Thank you, sir, for what it took to make this all possible.  For awhile, there, I wasn’t sure you were going to make it.  Mighty glad you did.”

Freedom, tears sliding down his seamed cheeks, silently nodded.  Responsibility, though, stood and, stepping over to the older man, offered his hand.

“Thank you, sir, for the courage to serve and keep this all possible.  It’s men and women like you who give us—” here he nodded to his right at Freedom, still struggling to contain his emotions— “ the continuing resolve to stay in the fight, to keep trying to inform the young ones that it is impossible to have one of—well, us—without the other.”

The old vet’s eyes were unfathomable as he took a second or two to respond.  Looking straight at Responsibility, he nodded slowly.  “I’m thinking you could use that support right now; the more seriously they start taking you”–he glanced over his shoulder, scanning the multigenerational knots of shoppers and browsers, a few of whom were by now noticing the men standing to the side, talking and looking back at them–“the easier your job becomes.  And the healthier he is.”

Freedom stood and squinted at the other three.  “Don’t ever count me out.  Wherever one man or woman takes a stand for what’s right, decent and true; whenever they step up to defend the right to live free, to make their own way in the world, and to be able to enjoy the rewards for their own labor, it gives me strength.  All I need’s a few good men and women, and I’ll keep on!”

While the others’ attention was on Freedom and his passion, Responsibility was eyeing the younger man who’d remained respectfully silent.  Jutting his chin at the young man, he said, “I’ve learned a few things from your generation.  Do you mind me seeing what’s written on the back of your tee shirt?”

With a lopsided grin, the guy said, “Sure” and turned around.  As Responsibility read, his own grin got wider and wider.  The bold blue letters read:

Nobody cares about your excuses.  Nobody pities you for procrastinating.  Nobody is going to coddle you because you are lazy.  It’s your butt.  YOU move it!

Chuckling, Responsibility nudged Freedom in the short ribs.  “I think you’ve found one of ’em!”  As Freedom read the shirt, Respy addressed the young guy.

“More than you know.  We may be young, but we’re just as disgusted with the cupcakes following us as you are.  We’ve gotten a good look at what it might be like without him”–cutting his eyes across at Freedom–“and realize we want no part of it.  So if you’re looking for support, there are a lot of us who you call Millennials who’ll have both your backs.”

Responsibility was quiet for a few heartbeats.  If there really are more young men and women like this guy out there, there’s hope for the nation.

“Thank you for that.”  Turning to include the older vet, Responsibility said, “Thank you both for the chat.  Have a safe Independence Day with those you love–and thanks again for your service.”

As if on cue, both the veterans took a step back, came to attention, and popped two of the sharpest salutes Freedom had ever seen.

“Our pleasure, Sir.  Thank you for your support!”

The two men blended into the milling throng of holiday shoppers.  Musing, Freedom and Responsibility stood watching long after they’d disappeared from sight.

“Toady frogs waterproof?”  They headed back over to the Peets kiosk, where Wendy intercepted them, calling them to the side.  “Hi, guys.  Your refills are already paid for.  Here ya go.”  Puzzled, they looked at one another.  Wendy grinned and said, “Two veterans were just by here and bought these for you.  They said they were sure you’d be back over.”

Sitting back down where they’d been, Responsibility opined, “I think things are gonna be okay, old pard.”  Freedom just sat and carefully took a long slurp of the fresh coffee.  Smacking his lips, he appreciatively nodded.

As you gather with family and friends to celebrate American Freedom’s birthday, remember by Whose hand that freedom was, and is, possible.  History shows again and again how, just when it looked like our freedom was on life support and fading fast, the Providence written of in our founding documents stepped in, usually against seemingly impossible odds.  God had indeed shed His grace on these United States of America.  I encourage you:  join with me in assuring we never staunch that continuing flow!  A safe and memorable 4th to you all!