When I first heard The Voice in my left ear asking, “Do you want to be healed?”, I had no idea what was involved when I answered, “Yes.” Since that early February Sunday 14 years ago, I’ve been learning some things.

If you’ve experienced God’s healing touch, ask yourself:  “Who were those other people around me when God healed me–what happened in their lives, too?”  You may not know the answer to that Earthside, yet it’s worth thinking about.  Your healing wasn’t just for you.

God:  “It wasn’t your prayer I was waiting to hear.”

I didn’t find out until later that both my wife and my son, in separate instances, finally gave up and said something like, “Okay, God.  If You’re going to take him, just do it.  Either that or heal him.  I can’t take any more of this watching him being repeatedly cut open, carved on and still starving to death!”  It was when they both reached that point of total surrender to what God was wanting to do – either way – that I heard The Voice that Sunday morning as I sat quietly, eyes closed, listening to a song. God had other ideas.  From His exhaustless bag of Celestial Stuff He gave me back a somewhat-marginalized 180-lb., 5’10 body.  Having always been muscular, I pouted, “I can’t lift up garden sheds anymore.”  God gently slid His huge arm around my now-kind-of-scrawny shoulders and said, “I’ve other things I want you to be lifting from now on.”

“I want you to lift other people’s spirits and attitudes by your writing and speaking.  I’d never have gotten your attention long enough to stick with this gift, had I returned to you the body you had.”  God’s healing is never found on the BOGO table.  It’s as unique and personal as you are. 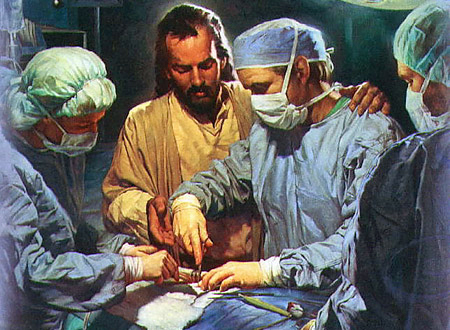 Then there are the other times when God steps in, revealing a raw, shockwaving power unknown to our world but natural in His.  That’s what happened with me.  Nothing could have prepared me or my family for what God began that day, though we were people of God and strong believers in prayer.  None of us have been quite the same.  Even those who have since chosen to walk apart from God and His Word know – KNOW – His power to heal.

So you ask, “How’s that healing thing workin’ out for ya?”  Day by day, friend.  You see, this thing I’m living in is medically impossible.  What God began that February Sunday back in ‘o3 continues every morning.  I know – we all know – if God decided He was done with whatever He had in mind in working through me, it would only be a matter of weeks and I’d go see Him.

I don’t expect that, though.  Know why?  There are still stories for me to write.  You know the kind:  those that always seem to have a strange sense of Heaven woven into them in ways not pushy but definitely pointing the reader to God.  There are still many posts to compose that elevate and lift and encourage and challenge.  There are books needing to be written and published.

Well, there is that other deal.  I promised God two things when He healed me.  First, that I’d never bore anyone with ‘just another story’.   But, next, that I’d never let any chance go by to tell someone a little of my story.  God’s not done doing stuff in His world – and I’m a walking, talking testimony of it! How’s the healing thing workin’ out?  Exactly how God wants it.  Each day’s a new adventure.  Each comment in response to something I’ve written, or each time I’ve spoken, opens just that many more windows of thought.

It’s a thing of joy just to be alive and share them!