“Truth in advertising“, it read. 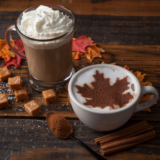 Granger was fed up with the glut of political flyers in his mailbox and inboxes.  Tossing on his desk the garishly colored hit piece in yoga pants by a former state senator, he swung around and gazed unfocused out the window at a grayish, cotton-streaked sky with bruise-blue accents.  Chuffing through his nose, he thought, “Even the sky’s puzzled by it all.”

Bemused, he reached for his “Coffee Made Me Do It” mug.  Just before he got it to his mouth, he noticed the “fun-size” Butterfinger laying on his desk; it had been hidden by the big black mug.  Glancing over at the glass bowl full of assorted Halloween-sized candy, he saw many other bars identical to the one huddled behind his coffee.  You won’t get away from me-e-e . . .

Amused at the desire-borne moisture in his mouth, he glommed onto the familiar yellow-orange-gold wrapper.  Granger actually licked his lips as he tore the wrapper lengthwise.

Opening the wrapper, he grimaced in disgust.  Really?  Instead of the neat, compact one-by-two-inch chocolate-covered nougat he expected to find, a sharded mess of odd-shaped pieces had fallen onto his black crew-neck tee and khaki pants.

Irritated, he started to grouse about something more to clean up when he suddenly got quiet.

I know people like that, he reasoned.  Brightly packaged, looking like others in The Bowl, like they’ve got it all together–until the wrapper comes off.  Unwrapped, they’re a ragged, jagged collection of misshapen pieces just waiting to fall all over the place.

As these thoughts jostled each other in his mind, he glanced again at the phrase off the discarded voting flyer:  “Truth In Advertising”.

Granger’s eyes blurred and his voice thickened as he spoke aloud, a habit of those who spend most of their time alone.  “Oh, yeah.  Many’s the time that, had my wrapper torn, all my hidden insecurities, my personal misgivings, self-doubt, all those questions about myself would be laying all over in a huge, untidy mess just like–” here he made a rueful face as he surveyed the slightly-sticky, sweet mess he’d dumped on his clothes– “my ill-fated little candy bar buddy, may it rest in pieces.”

Later, wearing a comfortable black-and-red shirt with the sleeves rolled half up and a soft pair of old jeans, he stood with mug in left hand and coffee carafe in right, thinking about the recent experience.  Shaking his head as if to wake up, Granger poured a fresh, fragrant cup of Community Golden Caramel, returned to his desk chair and sat pondering.

Is it wrong to present a public appearance that’s attractive, appropriate to one’s task?  Does that not reflect good self-image and -respect?

Is it deceptive to present an outward persona that’s positive and uplifting, even when one’s interior landscape more resembles a barren wasteland?  As a Christ-follower, isn’t being winsome and attractive kind of necessary?

Sipping thoughtfully at the semi-sweet, smooth coffee, he answered his own question.

Deception is willful.  Wearing a mask is intended to hide, to frustrate and conceal.  If those are the reasons for the wrapper, then the advertising is dishonest and disingenuous.

If one’s desire is to be a consistent positive, encouraging and Christlike witness to one’s own world, then God can be trusted to know how to tenderly deal with the internal brokenness.  To fit the nonfitting.  To create beauty and symmetry just as perfectly as He did at The Original Event.

Rising to refill his mug, Granger thoughtfully nabbed another of the sweet, chocolaty morsels from the Halloween bowl.  Grinning as he softly checked that this one was whole, he admitted to himself, I don’t have this here “for the kids” since none ever come up here.  I have this here for me.  And I’m lovin’ it!