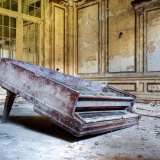 They looked around, wondering where Danny was.  Again.  Like his namesake, he could be depended upon to get bored with social settings and being proper.

Whatever there was close by to explore was always the first place to look.  They’d learned, too, that he may take off without food, but he never went ” ‘splorin’ ” without a knife.

His favorite was an aging Old Chicago butcher knife he’d rescued from the alley behind their place.  He’d helped himself to some of his dad’s electrical tape to wrap the loose wooden grips.  He’d also found some discarded canvas scraps and liberated some of his dad’s rawhide bootstrings, crafting a sheath he could wear on his belt.

Even though R. G. and Ida had over 35 years of Boone-raising , this last one was still all the challenge they could handle.

They thought together.  What could possibly get the attention of an inquisitive 9-year-old?  After all, he’d crawled into, under, over and through everything within walking distance.

It came to them at the same time. “You don’t suppose—“  They’d told him almost daily to stay away from the property where everyone knew Lady Galtrey had committed suicide.  Some said on certain nights there’d be a weird light coming from the grand ballroom and you could hear her playing the piano.

Pausing on the porch, they pushed past the half-opened door, hesitantly entered and found him sitting on the floor of the grand ballroom, idly drawing figures in the thick dust that covered the floor.  His eyes were on the once-beautiful grand piano, now listing to port and down by the bow, much like Titanic just before taking its final plunge. . .

Danny’s mom stage-whispered, “Danny?  Son?  Please?”  He glanced around and saw both anxious parents standing in the doorway nearest the house’s entrance.  His mother motioned.  “Now.”

He slowly rose, walking toward them but with his head turned, eyes scanning the old instrument.  With wise eyes, his dad noticed a circular place on the left side where the time-grunge and dirt had been rubbed away, revealing the stunning walnut burl finish.  Looking at his boy, he could see the spot on his shirttail where Danny had seen through the dirt to find the beauty in the old listing piano.

As they walked together down the lane away from Galtrey House, his mother opened her mouth to begin the inquisition.  As she did, she caught R. G.’s eye and saw him slightly shake his head like Sandy Koufax shaking off the catcher’s choice.

“Yes, sir.”  Danny squinted up at his dad in the afternoon sun.  “We got any cleaner and maybe some polish?” If Danny had his way about it, Lady Galtrey would have a beautiful piano to play on those evenings when there was a slight chill in the air, wavering shadows became an audience, and quiet memories of better times drifted like sonatas, silent melodies on the night breeze.