“What do you mean, ‘up-North skeeters’?  I grew up on the Columbia River, son.  I know mosquitoes.”

My Canadian Forces crewmate was unfazed by my unbelief.  His cryptic reply, tossed over his right shoulder as he went about his duty, was “We’ll see, ay?”

I was deploying to King Salmon, Alaska the next week for a year-long deployment to a USAF radar control site, the 705th Air Control and Warning Squadron, two hundred and seventy-four miles southwest of Anchorage.  For those who like locating out-of-the-way spots, just find Naknek.  Or South Naknek.  Look around there and you’ll find King Salmon Airport. 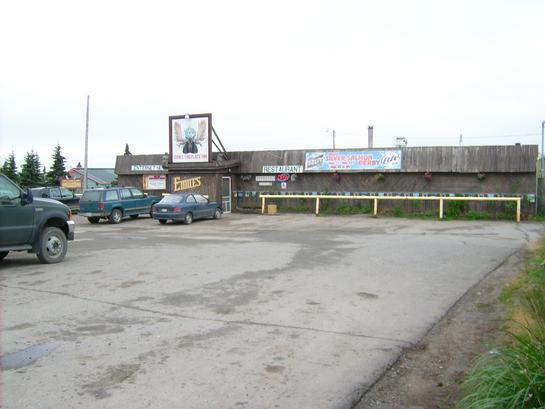 I endured the usual poking, prodding, licensing, securing, ordering, briefing and debriefing.  It was the normal whirlwind treatment by professionally-bored personnel types, both as I left The World and landed in Someplace Else.  I was loaded down with Arctic gear and sat through a couple of additional briefings the good folks in Alaska thought imperative.

There was an official fire briefing.

“What would you say is the biggest concern about living in Alaska?”  We all agreed:  FREEZING.

“Nope.  Tha-a-at would be fire.  Lotsa dry heat in every building where you’re going.  Get careless, have a fire, your shelter burns down and THEN you freeze.”  Delivered with all the empassioned verve of a bus driver asking for passes.

There was an official bear briefing.

“They’re very large omnivores.  They prefer fish, roots, berries and garbage; but you’ll do in a pinch.  Leave them alone.  Use a telephoto lens.  They were here first.  Bears have right-of-way.”  With that he turned to the few of us headed to King Salmon.  “That’s especially true of Yogi Trail.”  Was there a malicious glimmer in his left eye?

There was an unofficial, very serious skeeter briefing.

“Pay no attention to the mosquitoes.  They swarm in squadrons big enough you can hear ’em and see ’em a long way off.  Watch for—” Here he got closer and quieter, looking left then right—  “Watch for the White Socks!”

We asked:  What are white socks?  We were only issued black.

Again looking around–  “You’ll find out.  Buy yourselves two or three BIC lighters before you head out there.  Guaranteed – the BX is always short, and you don’ wanna be without your BIC.”

Old heads nodding, pulling out their BICs.  “White Socks.”  I couldn’t see anything, and was beginning to think this was an Aleut form of snipe hunting.  Just as I started to crack wise one of those little suckers bit right through my denims.  Titanium teeth with the attitude of a Tasmanian devil nursing a boil in a very tender spot.

‘Little’ is accurate; they’re small.  The way you notice them is that half of their legs are pure white; you see them swaggering nonchalantly around your body, looking for just the right spot to nail you.    Their bites are way painful and often raise walnut-sized welts.  Letting them bite you is contraindicated.  By the way, it’s the females that are such vicious people biters.  The males seem to prefer nectar.  Just sayin’.

Soon I’d joined the old heads who just carried their lighters in one hand whenever outside in nicer weather.  The minute they landed, we fried their little, ah, sterns.

Point?  We all went up there thinking we knew the big threat, those huge, bloodthirsty mosquitoes we’d read about.  To look at a White Sock?  Pfft.  That little ol’ thang?

Show wisdom in paying attention to the little things, and you’ll find there are fewer and fewer big things with which to contend.

Not all little things are as harmless as they look.  Deal with them when they’re still little, even if it means you occasionally must get rough.  It’ll pay off later on.

Remember to flick your BIC when it’s necessary.