When Jesus said, “It is finished” He did not mean it’s all over.

When God’s involved, it’s NEVER over!  EVER!  Where’d we ever get the notion that when Jesus could barely grit his teeth and get enough breath to utter, “It is finished”, it somehow automatically translates to LOSER?

No matter what’s happened in this life, for a Christian it’s NEVER OVER.

No matter how rotten life’s been thus far–

When you step across from Here to There–every believer who’s ever meant anything to you, including Jesus Himself, will be crowding each other around the entrance, waiting for that first glimpse of YOU.  And there’ll be a few surprises, too!

“FanTAStic to see you!”

When Jesus said, “It is finished,” what He meant was, “We ain’t even stawrdid yit!”

Think about it.  For all Satan’s swaggering, bullying ways, he couldn’t even manage to keep a dead man dead.  Everything the Bible records from the Creation event until right now has turned out exactly as foretold.  Exactly!  All of it!

Know what that means?

It means that those few remaining pages worth of the REST of what the Bible records is going to turn out exactly as predicted, too.  Exactly!  All of it! 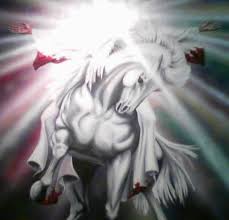 “IT IS FINISHED” was and still is a triumphant battle cry, the raising of a victor’s yell of affirmation!  It was and still is God saying the entirety of His salvation plan through Jesus Christ is now and forevermore a done deal.