THE SUMMER of MY DISSONANCE – A Granger Story – Ch. 2 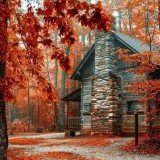 It was a pleasant afternoon.   The light filtering down through the pine fronds had begun to soften like the fraying edge of a favorite old blanket.  I brought everything in, moved my aging and faithful Blazer around back and secured it.  Suddenly feeling hungry, I came back inside to fix some dinner.

The cabin’s owner had thoughtfully laid a fire in the fireplace.  I lit the kindling, squatting for a minute on my haunches.  It was peaceful listening to the satisfying crackle of the wood shavings and kindling as they began offering up that age-old mountain sacrament – the fragrance of pine incense.

Taking down a huge old cast-iron skillet, I dug a couple of mounded tablespoons of bacon grease out of the cup some wise soul had left in the refrigerator and dumped them in the skillet.  Lighting the big burner, I let the grease start to melt as I laid out two veal cutlets.  As I peeled and cut up several potatoes and put them in the grease, I reflected again what a difference there is between the normal mile-a-second world and this, this multidimensional oasis for body, mind and spirit.

The frying potatoes were giving off their trademark aroma.  It was time to add the veal cutlets.  I did, with customary panache.  I grinned at myself, reasoning that while here, there’s no reason to use big words.  There are no readers here in the woods to impress, and the magpies, squirrels and chipmunks couldn’t care less.

A blue granite coffee pot sat on the counter.  Beside it was a canister I assumed held coffee.  It was some sort of glazed terra cotta, the color indeterminate and oddly shifting depending on how I looked at it.  Well.  Mooning over a canister’s perceived weirdness doesn’t get the coffee made.

As the meat began to sizzle I filled the coffeepot with fresh water – there is no clearer nor colder water than that from the mountains – and opened the canister.  A smoky, earthy scent of some serious sort of dark roast told me this pot would definitely fill a man’s cup.  I dumped two generous scoops of beans into the old hand grinder and went to work.  Grind.  Dump coarse grounds into the hopper.  Tighten, then regrind.  I love my joe with some flavor.

Removing the tray, I emptied its contents into the pot’s metal basket and set the perk assembly down into the water.  The smaller burner soon had it heating.  Wiping the excess coffee dust from the grinder’s tray, I stuck it back in.

I leaned against the counter, listening to the hissing roil of the agitated water in the old coffee pot and the occasional buh-blurp as it began to perk.  The canister drew my gaze as if silently whispering my name.  What’s with that?  Perking steadily now, the coffee was sending out aroma-rays that pleasantly flared against my nose.  Maybe it was the mountain air or the not-quite-stillness or–I don’t know.  It might’ve been a combination.  Whatever the reason, that coffee smelled better than ANY I’d ever before laid my nose on.

Checking everything, I then walked across the bear rug and out onto the porch.  Twilight had wandered quietly up, gentle on the easy mountain breeze.  Inside, the fire was languidly licking at the split pine chunks like a contented cat combing its fur.  I could just barely hear the muted sound of a jet high above my aerie, carrying somebody somewhere.  Bet they’re not getting veal and fried potatoes and fresh-ground java.

I turned the meat, stirring the potatoes, then poured myself a hot cup of coffee.  Taking one of the glass lanterns down from the hearth, I lit it with a kitchen match and took it and my cup of coffee out, setting them on the little table.  By then, my meal was ready.  I entered the fragrant kitchen intent on securing something every hungry man wants:  meat and potatoes.

Turning the big burner off and the little one down, I plated the food and took it outside.  I stood there once again, looking at the dusk and sniffing the playful, bashful breeze.  Then, holding the plateful of pan-fried veal and fresh potatoes carefully, I slowly sat down in the old rocker.

As I settled in that old chair, I had a sense I was about to have an encounter unlike any other.

As it turns out, I wasn’t disappointed.