Many of them are military veterans who’ve come back home and are doing their best to integrate back into the American social scene.  With their specialized training and experience, it’s not difficult to understand why so many of them become EMTs, firefighters and law enforcement officers of one sort or another.

In a sense, we’ve made that task of integration easier because as a public we seem to have become stupider.

Enter the cell phone – often known as ‘smart phones’.  Though we’ve not yet figured out how to surgically implant them in our ears, way too many of us do a super imitation of acting as if.

In work zones – you know, those spots along the highway where traffic is always the busiest that suddenly sprout diamond-shaped day-glo orange signs – I’ve been noticing $500 fines for being caught using your cell phone while driving in that ‘ROAD WORK AHEAD’ area.  At first I thought it was because the electronic signals could interfere with the equipment.  Then it made sense as I read other signs saying there are often unprotected people in work zones, and inattentive drivers clip them on the way past way too often.

Oh, they tried the nice way.  DO NOT USE CELL PHONES WHILE IN WORK AREA.  I actually saw drivers staring at the sign while blah-blah-blahing on their phone.

Note to Doofuses who habitually blab on your phone while driving.  You.  Are.  Distracted.  Don’t waste my time mentioning the nifty Bluetooth app which allows your hands to be free, or how well you know the road, or any of the 87 other handy excuses we all think up.  No matter where your hands are, your mind is not paying careful enough attention to what’s going on around your wheels.

The fact that you’ve not yet wrapped your vehicle around a piling or lamp post or bridge abutment – or taken out someone else’s vehicle – is just dumb luck or God’s direct intervention.  The most egregious near-misses for me, especially in intersections, has been with drivers cheerily blabbing away, never having seen my vehicle and certainly never acknowledging the basic rule of highway courtesy and right-of-way.

My vehicle’s shiny red and I always drive with my lights on.

Speaking of shiny red vehicles with lights on?  Here’s why I’m writing this today.

When a Police vehicle, Fire truck, or Ambulance is coming with lights and sirens on, for cryin’ out loud, please–as safely as you’re able,

If you don’t know the basic rules, go online.  Consult Google – and NO, not while you’re driving.  I’ve observed some of the same less-than-useful idiots doop-doop-dooping along, blabbing about “Those KC Royals”, with a huge, shiny red fire engine bearing down on them, lights strobing everywhere and sirens whoop-whoop-whooping and horns blaring. 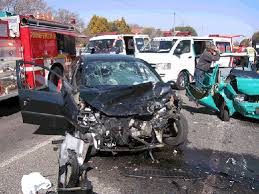 Seriously, people.  At some point, someone’s going to lose their life because those rushing to their aid couldn’t get through the thoughtless, self-absorbed adolescent drivers in their way – including those who might’ve caused the accident in the first place by . . .   you guessed it.

“Adolescent?  Hey–they’re not all kids!”  Nope.  You’re right.  But when an adult driver is busy boppin’ to bazillion-Db subwoofers, blah-blah-blah-ing on their phones and being totally oblivious to other drivers they just cut off or forced to change lanes because of their erratic driving, they’re sure acting like irresponsible teenage drivers.  In fact, they’re worse:  they’re supposed to know better.

And one day that injury accident those first responders are trying so hard to get to will involve one or more of our less-than-useful idiots whose arrogant love affair with their smart phone has blinded them to the very costly danger of messing with it while driving.

Adults, knock off whupping up on the kids for texting while driving.  Many of you are just as bad.

Please–think about it.  Nothing–absolutely NOTHING is so important that it can’t wait until you stop your vehicle.  Pull over if you feel the call is sufficiently vital.  Your phone is made to take messages.  Let it.

As a former hospital/ER chaplain, I’ve seen way too many of the sad results of inattentive driving.  I’m asking you again. . .  No, I’m just telling you.

Leave your phone alone when you’re driving.  The person on the other end will understand, “I’m driving.  I’ll call you back.”  And if they love you, they won’t want your attention divided between them and your responsible driving. When a Police vehicle, Fire truck, or Ambulance is coming in either direction with lights and sirens on?  There’s a good possibility the people in it responding to help someone else is a United States military veteran doing what they were trained to do:  racing toward the threat to help someone else.

When you see lights and hear sirens and horns, for cryin’ out loud, please–as safely and as soon as you’re able,

The life that’s saved because you learn to do that, and remind other drivers to do it, might just one day be your own.