Reflections On Dadhood – An After-Father’s-Day-Report “When small I often thought what I could be as Time placed manhood’s role on me.  Shades of ‘fireman’, ‘cop’ and ‘jet pilot’ ran swift while through such professions I would sift.  Such magnificent jobs were of course my bent–and as dreams come and go, these came and went.

“Now, what small boy at one time or another does not focus scrutiny on his big brother?  I’m no different, yet, sad to say I saw nothing then to give me sway to ideas of following where they stepped; much nobler were things at which I chose to be adept!

“Of course, we’re taught before we bother to pick life’s work to look closely at our father.  This I did, and to my utter chagrin I had nothing in common with the work he was in.  Why, that meant WORK (to which I never aspired since I watched my father who was always tired).

“Looking back now as husband and father I understand more why Daddy would bother to keep pressing on through sickness and pain – so that, perhaps, a lazy son could gain priceless truth of what it means to be a man; that, in fact, I’m just now reaching where Daddy began.

“Part of the pain of having a son is knowing the love he holds for his dad he’ll not be showing ’til Time has it’s way and he stands alone, in command of his son, wondering where Dad’s gone.  The memories then come fast and furious; in light of his father’s wisdom, all else seems spurious.

“Hence, after busy years have flown and the reins of my destiny are my own, my heart and mind reflect with joy on the way my Daddy raised his boy.

I used a calligraphy pen, hand-lettering this on parchment paper I’d artificially aged by burning the edges and holding the paper over open flame just enough to discolor it.  I was 32.

THEN, on Father’s Day five years later, I wrote a short piece of prose, perhaps foreshadowing the writer hidden within my heart.

The Man Who Wore My Daddy’s Shoes

He wasn’t very big, not really.  There were many who stood taller and broader; and who had bigger feet.  I soon surpassed him in all three dimensions and, teen-like, I secretly gloated.  Now, with time-cleared vision I see that no man ever had broader shoulders, stood taller or left bigger tracks than the man who wore Daddy’s shoes.

His shoes always seemed stodgy to me.  Why?  Well, they were always so practical.  Style never affected him much; he chose instead comfort and service.  Footwear in his closet spoke with mute eloquence of permanence, of building, of work.

And what did he offer me, this man who wore Daddy’s shoes?  A pair of school shoes remarkably like those in his closet–every Fall!  My grief and embarrassment knew no bounds!  But at least one knock-’em-down-and-sit-on-’em bully can attest to their solid construction.  We were friends after that.

Want to know which of his shoes are my favorite?  Stuffed deep in a musty barrel is a scuffed, worn pair of logging boots that I happily wore for as long as my feet fit them.  Why?  They spoke of him, this man who wore Daddy’s shoes.  Somehow I felt closer to him just by wearing those old boots. Years have flown.  Today, I secretly observed my son wearing my shoes, and it gave me the strangest feeling . . .  Why?  Because he is now eighty-five years young – this man who wears Daddy’s shoes – and you know what?

I love you, Daddy.

People love bully stories, primarily because we’ve all been subjected to their idiocy.  Nobody likes them, and when somebody stands up to one of them it really messes up their gee-hawed sense of self.  This one’s name was Gary Hall.  He was one of those naturally big kids whose size intimidates everyone nearby. 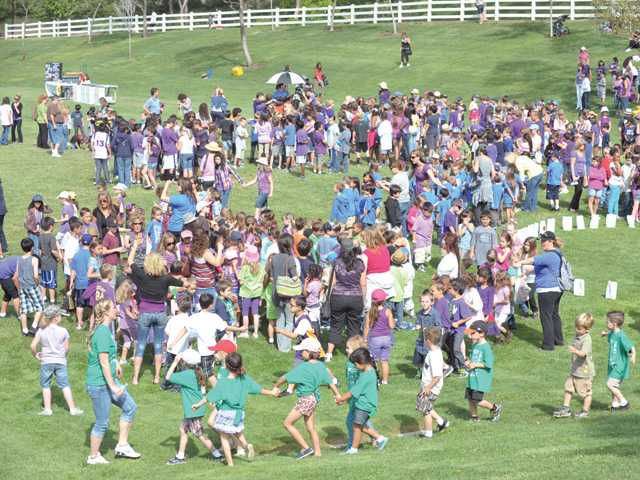 We were in the sixth grade at Umatilla, Oregon’s middle school and were out on the football field during what smaller grades called recess.  It was a good time to stretch the kinks out of backs sore from those old desks, walk out to the bleachers with friends, toss little footballs back and forth, play marbles or just catch up on gossinews.

A natural introvert, my withdrawn nature came across as being timid or weak.  I had walked past the old gym, down the cement steps to field level, crossed the cinder track and was ambling toward the bleachers where I expected to find my best bud, Thomas.

I’d observed Gary running up to this or that target, tripping them, throwing them down on the ground and then sitting astride their upper chest and pinning their arms with his overgrown thighs.  He’d then rap on their foreheads with his already-hairy knuckles until they squawled, “UNCLE!”  He’d then slowly arise, scanning the circle of disgustingly-fascinated onlookers, grinning and preening for the girls.

That day I somehow was in the crosshairs of his narrow yet oddly-focused mind.  When I heard the thudding of big feet behind me, I turned just as he grabbed me, tripped me and threw me to the ground.  We were close enough to the bleachers that I managed to keep from colliding with them on the way down.

Knowing what was coming, I decided I wasn’t keen on any of his limited options.

Gary made two mistakes that day.  In his haste to triumph over Daniel Boone, he misjudged my quietness for meekness.  Thinking his empowered straddling of my arms and chest sufficiently intimidating, he began doing the Hairy Knuckle in my forehead.  His second mistake was not knowing his adversary.  I’m guessing he’d never read Sun Tzu’s The Art of War.

He’d effectively taken my arms out of the fight.  My legs, naturally muscular from birth, however, were free.  On my feet were those embarrassing, clunky, last-forEVER sensible shoes Daddy insisted on buying for me each year.  The picture’s accurate, excepting that nice, soft white sole.  Mine had hard, thick  leather soles the consistency of iron.

I did the obvious, instinctive thing.  Bending from the waist, I brought both feet up, encased in those M-1 Abrams shoes, and did my best to put Gary The Bully’s head through the goalposts.

See, being a McNary kid, I’d grown up roughhousing and rassling with mostly Umatilla Indian kids whose dads worked with mine on the dam.  One of them, Thomas Shippentower, was my best friend.  Note I did not write ‘wrestling’.  What we did was mostly rough and quick.  There was nothing pretty or rulish about it.  It was, however, very effective and very few messed with any of us twice.  Size had nothing to do with it.  Resolve is all.

I quietly got up, brushed the grass and chalkline off my clothes as best I could.  I then walked over to Gary the Jerk who was still holding his neck, moaning, crying and squawling.  I stood over him until he looked up and said, “I’m your friend.  But don’t ever do that to me again.”

From then on, I loved my sensible, clunky shoes.  Yay Daddy. 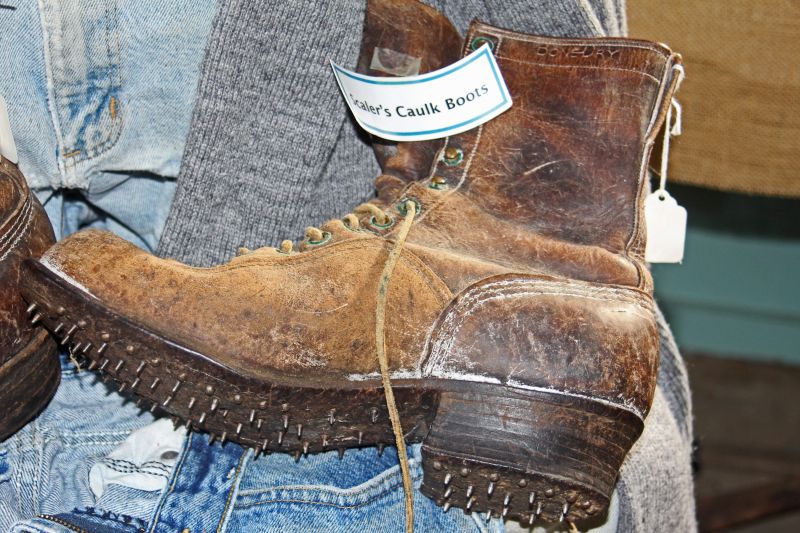 Oh, yeah.  Those dusty, stiff, worn old logging boots?  The loggers called ’em “corks” because the entire sole was covered with sharp, steel caulks to help them stand on or push off from felled trees they were scaling.  I always loved the sound they made when walking on any hard surface.  “I’m wearin’ my DAD’s corks, peepul!”

In both cases, I have realized there is a signal difference between being able to wear my dad’s shoes and filling them.