I sat staring at my venerable monitor, unconsciously tapping “London Bridge Is Falling Down” on my bottom teeth with a pencil eraser.

It stared back.  Guess the dated Samsung SyncMaster wasn’t overly whelmed with what I’d written, either.  It’s bad enough to have grammar Nazis all a-pester on Facebook; an electronic literary critic is beyond the pale.  My opinion.

I scanned the three sentences again.

“Parenting is the last known refuge of the rank amateur.

If that’s true of parents in general, it’s doubly true for fathers.  There’s a lot that goes into building a dad out of a father.”

You know, I liked it the third reading, too.  I’d been crafting something to go along with a selection from my files relative to the whole fathering thing.  It caught my eye and, oddly enough, as I read I kept having to wipe my eyes.  Cottonwood trees.

I put the pencil down and–seriously?  Coffee rings, over to the left of the monitor.  My OCD self started to jump up and clean it off; fortunately, the sensible, focused self grabbed Oc, pushing him back down while saying, “SIT.”  I’ve been doing some growing, it would seem.  That never used to work.

I’d been slumping.  Sitting up, I compromised.  After a desultory swipe across the offending rings with an old washrag I keep around for dusting and wiping up, I tossed it back in it’s cubby, then took up the pencil.  Oc muttered, “Least you could do is sharpen it.”

Fine.  The Blue plastic iPoint went nyer-nyer-nyer-nyer-uhhhh and the pencil point was nicely sharpened.  Oh, no-no.  I knew better than to ask Oc if there was anything else.

Sliding my chair closer to my wireless keyboard, I began reading again, looking at the yellow pencil with a slightly-damp eraser and pulling a yellow blue-lined legal pad to me.

“Hey.Watchadoin?Ah,coffee.Great.Doin’somewritin’, I see.”  The sharply-and-oddly-truncated, staccato delivery identified Arlough.  I kept reading, knowing without looking his next steps as if choreographed by an old Arthur Murray mail order diagram of footprints on the floor.

14 years: “Father?  You’re kidding, right?  He’s so old-fashioned his junk belongs in a museum.  Or a landfill.”

I heard his lips smacking and a barely audible sigh as he sank into one of my mismatched overstuffed chairs for, well, whomever.  Arlough does like his coffee.

35 years: “Let’s ask Dad what he would do before we make a decision.”

40 years: “I wonder what Dad would have thought about that? He was a lot sharper than I believed.”

Writers take notes.  The better the writer, the more notes.  I must be getting better at this.  I didn’t remember picking that pencil up, but it was already scribbling stuff on the pad.  Be a good idea if I kept up.

Pencil erasers are handy.  I heard Arlough, but was caught up in what I’d been tapping on my bottom teeth:  “My Lord knows the way through the wil-der-ness; all I have to do is fol-low….”

My slightly elevated chin and arched eyebrows told him to try again.

I hesitated.  Writers customarily don’t like being bugged or interrupted during the creative process.  On the other hand, this was my friend – a man whose loyalty and unfeigned esteem and love needed no imprimatur.  Not to mention the fact that his engineer’s brain could easily be the pattern for IBM’s z13.  That mainframe being able to handle 2.5 billion transactions a day might explain why conversing with Arlough is like trying to return serves from a tennis machine stuck on “Repeat”.

As Father’s Day looms near, I’m reflecting on being both son and dad.

As a boy, my impressions of my dad were that he was forever too busy making a living to enjoy much of life.  He had a sense of humor; yet he had a hard time letting it out much to play.  Always exhibiting a joy of fun for fun’s sake, he nevertheless did not participate in enough of it.  The more I grow – the longer I live – the greater a hero my dad becomes.

As a mature dad, my impressions of my son are that it was impossible to please me.  I was ‘always there’ for everyone else’s sons which usually meant ignoring as less important the needs and desires of my own.  Being understanding and kind with others’ boys, I was impatient with and hypercritical of my own boy.  The same was true of his sisters.

Without intending it in any way, I recreated in my own experience the obsession with being seen as a hard worker and good man as I observed in my father.  In the doing, I planted seeds of discord and deep yearning for relationship in my son and daughters for which I’d longed during my own growing-up years.  The more I grow – the longer I live, the less like a hero I feel.  Some hero . . .

“So, if you had the chance, what would you say to all the other dads “out there”?

It was my turn to sit for a minute.  If my brilliant friend is slowing down to assure I’m keeping up . . .    I stared at the coffee rings but wasn’t seeing them.

“No amount of guilt can solve the past and no amount of anxiety can change the future.  Learn from what was to help improve what is, and to prepare yourself for what will be.

“What I believed was important when my children were small was not.  I was active in pastoral ministry then and thought I was best doing God’s work by being out among His people.  I religiously prosecuted that work, never stopping to consider who would offer that same solace and strength to my own wife and children.  Blaise Pascal said, “Men never do evil so completely and cheerfully as when they do it from religious conviction.”

“For many sons, ‘success’ is finally squirming out from under their dad’s looming shadow, only to realize it’s a more frightening ‘freedom’ than they ever dreamed.

“For many dads, there have been times of stress from all directions that make them think about quitting.  Just walking away.  I’m sure there were times Daddy felt that way.  But then he’d turn around and see me toddling after him, watching . . .

“You’ll never understand nor fully appreciate your dad until it’s too late to understand and fully appreciate your dad.  God seems to have designed it that way for a reason.  Sons being guys, it’s inevitable that they’ll at some point decide their dad is lame, barely able to shave without help.  Daughters being, well, gals, it’s equally inevitable they’ll at some point jettison this frothy pap about Daddy being their first love, deciding instead that he’s the last example of anyone they’ll eventually marry.

“We’ve all looked at our dads with scorn, shaking our heads and saying, “Some hero . . .”  We focus on their scars without any thought of the wounds they represent.  We snicker over their failures and sneer where they’re vulnerable.  We’ve our own neatly and exhaustively-compiled list of grievances, some for which we offer neither grace nor forgiveness; and suggestions about how he could’ve done better, how he could’ve improved this or that about himself.

“Today, I’m looking at this amazing man who was my father, but worked hard to be my dad.  I see him now, after finding out so many things about him that explain why and who he really was, as a true bigger-than-life superhero whose size 10 shoes I temporarily could wear until my feet got too big – but could never hope to fill.  Leadership has been defined as holding a space for the brilliance of others.  This superhero in work pants who was my dad was secure and wise enough to do that for me.

“Today, I’m looking with humility at my kids’ father who’s so often made a hash of being their dad, shaking my head and agreeing with their assessment:

Arlough waited while my genuine imitation cuckoo clock gently reminded us of the half-hour.  “That it?  That would be your annual Father’s Day message you’d put out there if you could?”

Slightly emotional, I nodded.  He sat there grinning.

“Youjustdid.”  It was then I saw in his hand what was evidently his newest inventional gadget.  Still grinning, he explained.  “It’s a minicomputer and recording device that automatically connects with any social or email media I choose.  Totally digital and state-of-the-art. What you just said is already published on YouTube and Facebook.”

I sat giving him a half-charge version of The Look.  Didn’t take.  Not wanting to waste the full-voltage charge, I just repeated the weaker one.  Grinning in self-adoration, he jumped up, stuffing the offending thingie in his shirt pocket.

“Let’s go do Old Chicago for lunch.  I’m drivin’ and buyin’.  I’ll go get the car and bring it around front.”  The words swayed in the vacuum of his swishing out the door.  Smiling to myself, I stood and was starting around my desk when he popped his head back in the door.

Aaaaand he was gone again.

I don’t think Arlough and real time have much in common.  I pray he doesn’t drive like he talks. 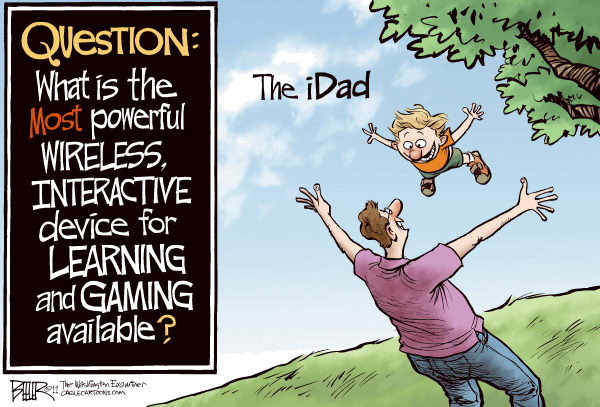