In any little American town during the Fall, Friday night is football night.

When the grass has stopped growing at Ludicrous Speed . . .  When the trees have begun trying on Autumn colors in an innocent-seeming deceptive feint as they conspire to drop all their leaves at once . . .  When the same store that’s gone out of business with everything slashed 50% for 27 years is sporting “GOING OUT OF BUSINESS – EVERYTHING SLASHED 60%!” in its windows . . .  And when you see the home bleachers festooned with taped-down blankets – Wait…  honey, that’s Mother’s starburst quilt – and all different colors and sizes of coolers from 2:30 PM on . . .  Gotta be football night.

Badmouth the boys?  “Might as well pack yer stuff and be movin’ on, stranger.  Hereabouts, we don’t put up with any pencil-necked twerp puttin’ bad juju out there about OUR team.”  Here’s where you’ll get the eloquent lift of the head and chin-jutted indication drawing your attention across the field to that pitiful, unprotected, half-pint aluminum bleacher.  “Yer spot’s ov-air.  Don’t fergit yer stuff.  We laid it sort of convenient-like on the ground at the end of the home bleachers.”

Magic.  Pure magic.  Somehow, the offender’s blue blanket with brown maple leaves, along with their Coleman cooler and bag of munchies appeared right where indicated.  Why?  Football night.

“Wait.  You can’t just–  who do you think you are?  These are public bleachers and we’ve paid to watch the game.  We even came early as suggested to get a good seat, and . . .”

“I think I was defensive left guard on th’ team that made second-runner-up in the conference and came purty close ta goin’ ta state back in ’62, right out there onnat same field.”

Seeing as how the offended home team football dad had stepped into the visitor’s personal airspace and was the approximate size of Cleveland, the visiting team bleacher soon sprouted a blanket – blue with brown maple leaves – a Coleman cooler and said bag of munchies.  I always wondered about the psychological impact of giving the opposing team’s fans such a paltry bleacher.  What choice do they have?  It’s either that or stand – or face the snarky derision of hometown folks by crashing their stands.  Still, offering such a difference in dimensions and height is like giving somebody a gift of a half-order of biscuits and gravy . . .

Football night.  If you’ve never lived in a small town little of this makes sense.  If you have, you need no translation.  Decades after buffed and strong young men played their hearts out, when many of those same guys are either dead, have moved on following careers or settled for maintaining the same life they recalled as boys, there remain traditions that the heart holds onto.

One such tradition, taught by a succession of wise coaches, was that both prior to and following every game the entire team would huddle around the coaching staff, holding helmets high and forcing them together with an audible ‘Clonk’ – and proclaim:

Win or lose, we who sat in the stands waited to observe that little touch of drama and team mentality.  It’s one thing to stand and proclaim that when everyone’s uniform is clean, helmets polished and nobody’s yet taken the field.

It’s different when a smaller group from within the team’s ranks stand in the middle of that same huddle after the game.  Sweat…  blood…  broken and taped fingers…  sore, strained, even sprained muscles and joints…  grass and dirt stains…  helmets scarred and bearing the opposing team’s colors…  dog-tired from playing both offense and defense and ready for the showers . . .

Coach Paul had some strong direction for The Team.  “You were all called to travel on the same road and in the same direction, so stay together, both outwardly and inwardly.  You have one Master, one faith, one baptism, one God and Father of all who rules over all, works through all and is present in all.  Everything you are and think and do is permeated with Oneness.”  Ephesians 4:4-6

In football, not everyone plays in every game.  A few have by hard work on and off the field earned the right to start.  Some are either so new to the team or as yet unwilling to put in sufficient effort to earn a place on the starting lineup.  It feels good just to put on the pads and uniform and be a part of something.

Coach said that didn’t matter.  Whether playing the entire game, going in as a sub, or not playing at all, everyone suited up stood before and after each game and repeated the same message to both bleachers:

Sure, there are hotdogs and boasters on every team.  And the pampered ‘stars’?  I never drink anything but Tropical Splash Gatorade…  So, I was juking to the left in my patented— oh, excuse me–a camera.  Would you like your picture taken with me?  It’ll be worth something in a few years…  You know them.  They’re breathtaking in their self-admiration.

Coach Paul had to deal with ’em, too.  Ephesians 4 is pretty straight talk about maturing.  Growing up.

I know.  The Church has some strident critics and some have valid points.  We’ve earned some of the caustic arrows shot at us.  That’s on us.  Owning where we’ve been less than sterling in our witness, and being willing to do something about it is the essence of spiritual maturity.

Recognizing that authentic men and women of Christ are going to irk nonbelievers simply by showing up and quietly living out their faith is also part of spiritual up-growing.

As a Christian, you don’t have to be a star to bother some folks.  All you have to be is real. 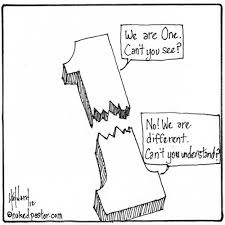 No.  We have differing ways of worshiping, thinking, observing Sacraments, exercising church polity and even diverge in some areas of theology.  That means we’re human and subject to what flips our biscuits.  And how we make our gravy.  Yet all those differing points of view are our ideas and impressions of who, what and how God is.  They are not His.  His Word isn’t ambivalent nor is He confused about Himself, about us or about what He expects of us.

Christian maturity means giving each other a wide ‘garbage margin’ in nonessential matters.  It also means exercising unity in the deep essentials of the Gospel message that through Jesus, God still saves all who want that.

I have a suggestion about where to start fresh in this matter of spiritual maturity in Christ.  How about we who are The Church begin once again having the same attitude and making the same bold statement as that football team in that little town?