I watched the man turn and walk off.  His steps should have made more noise, but they didn’t.  I glanced at his feet and realized why.  Moccasins.  Calf-high, with rawhide soles formed to his feet by putting them on new, then wading into a stream and getting them thoroughly soaked.  He’d then walked back out of the stream, water sluicing and squishing with each step, sat down in the sun with a good book, and let them completely dry out while still wearing them.  Once totally dry, those thicker soles were exactly molded to his feet – custom fit, you might say – and would from then on be the most comfortable footwear he’d ever know.

His hair was peppered, shoulder-length but startlingly clean.  He was clean-shaven.  As he left, a pleasant woodsy-spicy scent followed him like a capricious Spring breeze curling around my nose.  He was dressed casually but with care.  The colors were all muted and there was nothing that would catch light.  He was not a big man, but there was something in his squared shoulders and direct gaze that at once took in everything and everyone around him – and said it might be best to leave him alone.  Strange, but I had the impression that if need be, he could have spoken in well-modulated and proper English.  I’m a westerner, too.  I learned as a boy:  never judge anyone or anything merely by what you see.

I’ve learned to listen to people like that.  What they don’t say is often more important than what they do say.

I stood watching the milling crowd strangely part for him.  Long after he’d disappeared from sight, I stood mulling over his assessment.

It reminded me of part of a verse in Ephesians 3:16 that I’ve always liked and was again reading recently during some quiet time.  It’s another one of Paul’s written prayers for us.  Okay, for me.  It reads, “I pray that out of his glorious riches he may strengthen you with power through his Spirit in your inner being . . .”

Shortly after arriving in Wichita, we were searching for a place to live and found what we thought was a great deal.  It was a small manufactured home on a foundation, situated on 8 acres of ground out on K-42, southeast of the city.  We managed to cram us and our stuff into that tiny house and make it our home.

Then we set out to look for a larger manufactured dwelling, since there was plenty of space and we’d even chosen where it would be placed.  There were a lot of lots.  We looked at a lot of homes.  It seemed like every one we toured had more external features than the last; all sorts of frills and doodads intended to catch the eye and appeal to one’s comfort and ease.

They all seemed the same except for one company.  The homes offered there were build exclusively by Amish craftsmen and the places all looked like it.  There were no cheap, hollow-sounding veneer-covered doors, drawers or cupboards.  They were all wood.  Finished, stained and polished wood.  There were a few offerings to please the buyer’s eye, but everything in those homes spoke of a quiet assurance:  “I’ll last you a lifetime.  I’ll be your home.”

Paul prayed that I – you – would be strong and powerful in the inner person . . .

Huh.  It’s like those homes all glitzy and flashy on the outside.  I’ve seen what was left of those places after a good, stiff Kansas windstorm introduced itself.  Not impressive, unless you’re impressed by messes.

It’s like that mountain-quiet man who’d listened to all the political hoo-ha he could stomach from a blowhard who was also all glitz and flash on the outside.  Again, not impressive.

Paul nailed it, seems like.  It’s what’s inside you – your real internal foundation – that holds when life’s storms hit.  When – not ‘if’.  Seems to me that solid-core construction on the inside makes a lot more sense than poofy, spiffy décor on the outside.

Question?  Sure.  No, in the black and yellow Shocker polo.  Yeah?  How did I know how the mountain guy made his moccasins fit his feet like that? 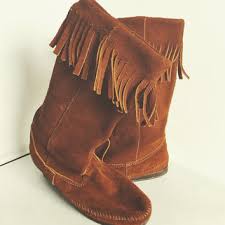 I had a pair of them once.  I spent a good portion of my summers up in the Oregon mountains with my parents, camping and fishing.  My dad was a Boone, which meant he was a woodsman and could get around up in the timber without making a lot of noise.  I figured to learn all I could from him, without, of course, acting like I was paying attention.

That, friends, goes against every statute in the Teen Manual of Anti-ethics.

I sent to the Cherokees to make me a pair of those mocs, and a buckskin hunting shirt.  I had them and wore them often all through my high school years and beyond – especially when I went to Alaska for a year.  As long as I wore thick socks and kept them dry, they were the bee’s knees.

To answer your question, I did the same thing with mine the mountain-quiet guy in the story did with his.

The lesson here?  Don’t be distracted by exterior things. Pay little heed to what you hear.  If you’re confused about someone’s true intentions toward you or anyone else, pay close attention to what they do.  How they treat you – have treated you – and others on a consistent basis is indicative of their true feelings and intentions.  It will tell you all you need to know.

Let the Holy Spirit maintain your interior foundations, and you’ll find your exterior décor amazingly effective as well.  Let God be doing His work in and through you from the inside-out.

It works.  He knows what He’s doing.