I have some ugly ones.  The ones you can see are fading over time.  Their effects?  As if it were happening right now.

Back in March a few days before Easter, a young pastor friend shared some great insights about scars.  I asked if he’d mind if I expanded on them a bit.  He said yes.  Beware when a writer seeks permission to take liberties with something you’ve written.  I purposefully let his thoughts and observations perk a bit before tackling this project.

Where were we?  Aw, yeah–scars.

You have some ugly ones, too, don’t you?  They remind you of things that happened on your back trail – things that bring rushing back to your memory not just occurrences, but odors, colors, sensations and sounds.  Scars are powerful reminders of where you’ve been.  Your nervous system remembers, too.

No one understands the value, the full effects of scars any more than Jesus.  Way before He stumbled under a cross’s weight on the Via Dolorosa, Isaiah prophetically said Jesus would be so beaten, so scarred and bloody we wouldn’t recognize him unless somebody pointed him out.

You’d think, wouldn’t you, that Resurrection power and the healing of the Infinite Creator would erase all those scars – right?

When Jesus showed up at Panera Bread or in the Walmart parking lot after the Resurrection, He still had the scars.  The only ones He chose to show were the jagged ones on His wrists and the sunken one in His side from the head of a Roman war lance.  But those weren’t the only scars on His body.

Okay.  Lock in on this.  Here are some salient points from my young friend, Billy Byler.  Jesus could’ve responded like us but didn’t. 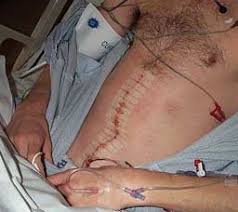 I’ve felt the sting of embarrassment for the way my scars looked.  I’ve loved being in the water all my life, having been raised in Oregon very close to the Columbia River.  Yet after having my innards resected three times and having my gut opened up five times, I had a world-class disgusting, not-so-straight scar from chest down.  Even my belly button isn’t the one I was originally issued; it’s custom-built.  Definitely after-market.  You don’t want to know what that conversion kit cost.

Point?  For years after those surgical events, I’d never swim without a t-shirt on.  I was very self-conscious of that ugly scar.  Never wanted the stares or the pity.  It took a loving, discerning daughter-in-love of 29 one day in a private pool to convince me:  “Maybe it’s time to take the shirt off.  Nobody’s going to care, and maybe God can use that for you to tell your story.”  I couldn’t have known that just a short time later, she’d be collecting that same ugly scar – only she wouldn’t survive it.

Jesus wasn’t parading His scars around, begging for sympathy and cadging java at Starbucks.  They- and He – remained for a reason.

It’s as if He was telling people like me, “I know you’re embarrassed and sensitive about all your scars.  You’re not ready to show them.  I get it.  So–here.  Use mine.  If it’ll help you ‘deal with the heal’ part, here are My scars.  Use mine.”

Ever notice the very ones who swear, “Hoss, I’ll have yer back ’til them cows fahnd their way back to th’ bawrn!” are often the first to bail at the sign of a little unpleasantness?  Jesus could have blistered their ears and seared their memories for deserting Him when He most needed them.

Never happened.  He had some perfect ways lined up to show each of them later on the price of cutting and running when things get real.  Do some homework.  None of the 12 guys Jesus chose even came close to having an easy time of it.

Meagan was right.  Scars remain for a reason.  Jesus knew He was an example in many ways – and none more than letting us see His scars.  Can’t lift a coffee cup without anybody seeing your hands and wrists.  It’s as if He was telling people like me, “I know you’re embarrassed and sensitive about all your scars.  You’re not ready to show them.  I get it.  So–here.  Use mine.  If it’ll help you ‘deal with the heal’ part, here are My scars.  Use mine.”

I have to wonder what Jesus would’ve done if Thomas, after seeing that ugly, stark place in His side, had asked with his voice breaking and tears coursing down his cheeks, “Master?  Could I . . . could I see Your back?”

I still don’t go around shirtless.  Never have.  The only time I’m without at least a t-shirt on is when I’m following doctor’s orders to get as much natural vitamin D as possible without sweating too much.  That series of scars, though, continue to remind me as I watch my reflection during exercising with dumbbells:  there’s a unique story of healing there.  And just as Jesus was willing to offer His to help others heal inside and out, mine are there for the same reason.

For the record?  I’ve seen a lot of ugly wounds across the years.  I’m not sure I could look at His back without weeping.  I’m still curious, though.  What do you think Jesus would’ve done with Thomas’s question?