There’s a difference between them, you know.

The more I read between the lines of Peter’s short letters, the more I’m wanting to meet him.  Of course, you understand when I say, “meet him”, I mean I want to spend several yarons listening to him reflect on his time here – especially his time with Jesus.

Ol’ Pete never struck me as the literary or genteel, peaceful type.  I figure when he grabbed a sword and tried to defend Jesus, he fully intended to give Malchus an unanesthetized lobotomy.

So when I read Peter saying, “Don’t give the opposition a second thought”, and “Stay wide-awake in prayer”, I can’t help but have a chuckling fit.  Pete was just the opposite.  Something dynamic happened in the life of one of Jesus’s closest earthly friends, because the Peter portrayed in the Gospels is not the same dude found in his later little writings.

“Be ready to speak up and tell anyone who asks why you’re living the way you are, and always with the utmost courtesy.”  Courteous?  Peter?  Wow.

“All of you, leaders and followers alike, are to be down to earth with each other . . .  so be content with who you are and don’t put on airs.  God’s strong hand is on you; he’ll promote you at the right time . . .  So keep a firm grip on the faith.

“Grace and peace to you many times over as you deepen in your experiences with God . . .  Do your very best to be found living at your best, in purity and peace.”

Huh.  Peter means for every Christ-follower living authentically for Him to mature.  To grow up in spirit.  He’s serious about it, too.  What a switch from the guy who I’m guessing was always-always-always up for some fun, maybe even a prank or two at Jesus’s expense.

Think about it.  Browsing through Mandelbaum’s Emporium in Nazareth the guys find a Whoopee Cushion.  James and John, the Thunder Bros, immediately slant eyes at one another and grin.  James waggles his eyebrows and John raises his chin, thumbs hooked in the waistband of his Levi’s, looking skyward and bouncing on his toes in a show of piety and great innocence.  James busts out laughing, John joins in the raucous but good-natured fun and they go to check out the latest fishing gear.

Peter, having watched the exchange from the clearance aisle, goes over to check out what so amused the two.  As he sees the cushion, a sly grin slides across his face as he nonchalantly sidles up to the self-checkout, swiftly pays for and bags up the cushion and–oh, and some mutton jerky.  Once outside, he tosses the bag in the trash bin by the door, his head swiveling as he hides the cushion beneath his, “HERE, FISHY, FISHY” t-shirt.

Yeah.  You’re ahead of me, right?  They swing by Arby’s on the way out of town, picking up grub for them and Jesus so they can eat while He’s teaching them out along the cool Galilean shoreline.  While everyone else is fiddling around sorting out the orders and deciding who got curly fries, Peter quietly slides the cushion beneath a woven mat Jesus usually sits on. 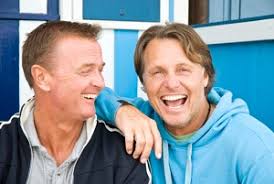 “Here, Master.  Take a load off and I’ll bring your food.”  Peter turns away and, catching James’s eye, can’t contain a huge grin as Jesus sits down on the nice mat and there erupts a disgusting, embarrassing sound just like—-

Even prissy, sourpuss Judas couldn’t quite contain his laughter.  They were all holding their sides, roaring.  Andrew was draped over a big rock and Thad was literally rolling on the ground; and Jesus was wiping his eyes, his laughter was so deep and open.  He absolutely loved these guys, even when they were doofuses.

“They say you should never make fun of Jesus.”  Judas.

“First, we weren’t making fun of the Master; we were having fun with Him.”

Listen to Peter’s statement he wrote many years later:  “Your life is a journey you must travel with a deep consciousness of God.”

During those intense 3+ years he walked along with Jesus, something in Peter was growing up, steadily maturing, the dimensions of his personal faith in and reliance on God constantly expanding.

“Your life is a journey you must travel with a deep consciousness of God.”

Ever notice when you want to excuse or explain away something, you’ve the tendency to think in terms of “they”?

“They say that doesn’t really do any harm.”

“I was told otherwise.”

“They” comes complete with a Nodding Happy Face kit including the optional wide eyes.  “Them” has a grungy frown drawn on the box with a magic marker.

Peter had plenty of chances to be adept in using both “they” and “them”, using the former to bolster his preconceived opinions and the latter to denigrate differing ideas.

You and I have, too.

Seems to me all those conflicting, conflated ideas came crashing together over a fire barrel in a Jerusalem courtyard.

They clearly separated again in a closed room following Jesus’s resurrection.  From that day on, nobody saw the old Peter again.  There was a new guy in town.

That’s the kind of difference Jesus Christ makes in men’s and women’s lives.  But I don’t want you to take my word for it.  Read about Peter’s embarrassing habit of approaching any challenge mouth-first; of his lack of faith, and everything else the Gospels reveal about him.

Then read what Luke had to write about him in Acts.  Read his personal letters to fellow Christians.  Big difference.

And it’s the unmistakable difference Jesus makes in any heart willing to receive Him as Savior and Lord.

I am curious about one thing, though.  I have to wonder what became of that Whoopie Cushion.  I mean, Jesus was in Heaven before Peter, right?

And there are plenty of places to sit there, right?

And since Jesus and Peter were so close, it seems reasonable to me that Jesus would’ve patted a place beside Him, saying, “Pete!  Great to see you again!  Come sit down and let’s catch up, man!”

Honestly, now.  Where do you think that cushion might’ve turned up?