“Is it true you read the Bible and take all that stuff seriously–that you actually believe it?”

Tornado clouds brooded over the Midwest Wednesday, swishing their dark, frayed skirts.  One dropped down out of those clouds and routed a swath of fiendish destruction in Moore, Oklahoma – a suburb of Oklahoma City. 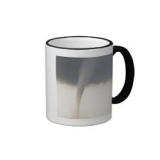 A 14-year-old boy and his dad were headed over to his uncle’s house because they had power.  Moving slowly through what looked like an intersection, Chase Rhodes noticed the upper portion of a power pole hanging above the ground, suspended by the high-voltage wires still somehow attached to it.  Thinking it looked like a cross, the boy asked his dad to roll down the window, raised his cell phone and snapped a picture of it.  He did what all kids do:  he sent it out on social media.

“Aw, COME ON!  Seriously?  You people see a cross in everything!”

And you see them in nothing.

Why the enraged shouting?  To believe or to disbelieve is your choice as a free American.  No one has the right to strong-arm your heart and mind, forcing you to accept anything against your will you choose to shun–though there are those in our land, not American in spirit, who are attempting to do just that.  That hallowed, much-derided piece of parchment known as The Constitution guarantees that right and has since its inception.  Equal rights for all have always been embodied in that document.

It seems those kicking up the most sand about references to Christian faith are those least willing to allow the many who hold it to exercise and openly speak of their belief.

Got it.  I don’t want to listen to anyone loudly demanding that God damn to Hell people, events, things, concepts, jobs, vehicles or opinions with which they disagree.  Think what a miserable hash of things would occur if He ever listened?

Think it through.  I find it far more inimical to be seated in a nice restaurant and being forced to overhear a table-full of grown men loudly, profanely addressing the world’s ills while uproariously laughing at each other than I do observing a family quietly holding hands and thanking God for the blessing of the meal.

“Well, yeah–but a cross made out of an electrical pole?”  That’s stretching things just a little, don’t you think?”

No.  I do not.  I heard the implicit assumption of agreement and saw you nodding in expectancy that I will cave to what’s deemed superior logic.

Worship of anything – including nothing at all – requires faith.  Since my belief is involved either way and to whatever degree, as is yours, where’s the problem with allowing each other to believe as we wish?  May we not differ in our belief without trying to compel everyone else to either precisely line up according to one individual’s dictates or be at least ostracized or at worst martyred?  Martyrdom is, by the way, murder. 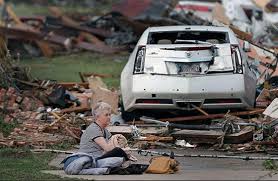 Young Chase saw right in the midst of a tornado’s dark, dank, clawed signature a sign of hope and a reminder of God’s grace.  It’s not the first tornado that’s hit Moore, Oklahoma; nor is it the first this boy’s seen.  It likely won’t be the last.

I watched his interview.  I saw about what I expected:  a tough, rangy kid from Oklahoma who has already seen his share of harsh, daunting life experience; and having witnessed God pouring His grace through good, solid people following those times, is unembarrassedly open about his own faith.

“But–a cross made out of an electrical pole?”

Correct.  It was an electrical pole, snapped off by the howling, whirling fury of an Oklahoma tornado.  It was just one more of many, snapped off like toothpicks, most of which were reduced to shards of useless wood.

We all see what we’ve trained our eyes to seek, to recognize.  Happenstance that one out of all the others just happened to not only survive the storm relatively intact, but be raised far enough above ground level that eyes were drawn to it?

I choose to believe in God’s little indicators that He’s aware and working behind the scenes to produce ultimate good as all of life’s experiences, taken together, are lovingly and carefully gathered in His hands.  I choose to believe as long as there are kids like Chase Rhodes who have a healthy grip on knowing God doesn’t do nearly as much to us as He does through us, there’ll be someone to whom we’re able to pass the baton when we head for Home.

Thanks, kid.  I needed that.