I read it several weeks ago and it grabbed me like barbed wire snags your shirttail. 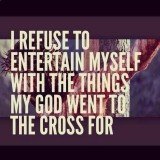 It doesn’t matter how much tithe you pay or on how many boards and committees you sit.  It doesn’t matter how often you liberally give to benevolent causes through the Church.  I’d guess the first time you laid eyes on this, you gave it a quick glance and got your eyes back over here on what I’m writing.

Made you nervous, reading that.  Didn’t it?

Each year around Easter, I stop long enough to watch THE PASSION OF THE CHRIST.  Yes, I know it’s a movie, created by fallible, imperfect men and women.  I’m aware many of those actors and actresses went on to play other, less, ah, clean roles.

I’m also aware the statement above is grammatically incorrect.  Isn’t it amazing the ends to which we’ll go to pick and find fault with something to keep from letting its truth settle inside?

I still believe it was inspired.  I watch it to remind myself:

The last time you read it, you probably did what I did.  Wow.  Strong words.  That’s a real good saying.  I’ll have to remember that.

Can I gently suggest when you reread it this time, you don’t let yourself off the hook?  This time, choose what you’re going to do with that.

It doesn’t matter whether you have a nodding acquaintance with God or don’t know Him at all.  The truth of His Cross is right there, it included you in the payoff, and you have a choice to make just as I do.

Yep.  Think about the nature of a relationship.  It’s a daily recommitment:  “I’m honoring this connection between us today.  I’m walking in all the virtue and integrity I’m able today.  I choose to walk by faith in God and His Word today.” 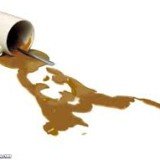 Or I don’t.  Either way, it’s my choice.  Jesus died and rose again to give me that choice.

“Well, hey, a person’s gotta have a little fun in this life, y’know?”

Sure, I do.  I enjoy having fun and relaxing as much as the next guy or gal.  I also know how easy it is when everyone around is relaxing a little too much, and the drift into compromising one’s own convictions and personal standards begins to happen and it gets easier to sort of blend into the crowd . . .

They’re all believers.  Say they all love Jesus.  Attend worship regularly.  And they really are fine folks.  And they’re my friends.  They’re—

Choosing.  I get it.  I love and appreciate them, too, just as I love and believe in you.  There’s no condemnation here; that’s not my place.

Mine is to keep my colors as clear as I can.  It’s to keep my image from getting blurry and indistinct in a world increasingly embracing an amoral nonethic that placatingly grins at God’s truth.

I know that one day I’ll need to give account for my choices.  I don’t want even one of you into whose life and experience I’ve written to be able to honestly say, “He never leveled with me and told me the truth.”

I hope you consider all this as you make your choices.  Let me leave you with this favorite quotation from Teddy Roosevelt.  To me, it can as easily apply to an insipid, nonthreatening, pliant strain of Christianity that costs nothing and therefore has no real value beyond lulling its dues-paying adherents to sleep.

“It is not the critic who counts; not the man who points out how the strong man stumbles, or where the doer of deeds could have done them better. The credit belongs to the man who is actually in the arena, whose face is marred by dust and sweat and blood; who strives valiantly; who errs, who comes short again and again, because there is no effort without error and shortcoming; but who does actually strive to do the deeds; who knows great enthusiasms, the great devotions; who spends himself in a worthy cause; who at the best knows in the end the triumph of high achievement, and who at the worst, if he fails, at least fails while daring greatly, so that his place shall never be with those cold and timid souls who neither know victory nor defeat.”