Story: RIGHT DOWN YOUR ALLEY

Even his steps were listless, hesitant, as if trying to remember how to walk.  His right hand was in his pants pocket, jingling the change that bore embarrassing witness to all he had left.  Idly, he pulled the coins out of his pocket. 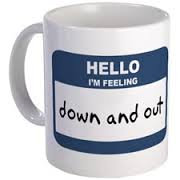 Three quarters, two nickels and two pennies.  His face, normally animated, was blank, empty as his bank accounts, drained dry as his spirit.  Shrugging slightly, he thought, “A lousy cup of cof—”  He sighed.  Can’t even buy a bad cup of coffee any more for 87 cents.  Not enough left to do anything with–just like me.

He was walking head-down, not really seeing anything beyond his own crushing sense of failure.  It’s why he never saw the scruffy old bag lady until she spoke in a dry, sqrawky contralto.

He stood for a second, swallowing the bitterness and sharp words that rose in his throat like the remnants of that second braut at the ball game.  Team lost.  That figured.  ‘A lady’, huh?  Ever notice when you have a truly toxic, rotten attitude, it spreads to everything and everyone around you?  You see them exactly as you see yourself.

He dug his hand back into his right pants pocket, pulling out the offending 87 cents in it.  Why not her?  “Here,” he muttered.  “You might as well have it; it’s just gonna get wet.”

The old woman peered over cracked and taped glasses at the coins in her hand.  Her ratty clothing served as excellent urban camouflage, making her form indistinct even standing next to her.  The waves of noxious odors hovering around her were, however, as effective as a GPS, he thought as he watched her.  Yeah, I had one of those in every car, too.  For an instant his eyes unfocused.  The Beemer SUV, the Acura–they were almost as common as name tags at Feldwebler Briggs.  But, ah, man, how I loved that Mustang . . .  it could talk to me in ways those prissy, status skates never touched.  I hope whoever gets it next will love it as I— 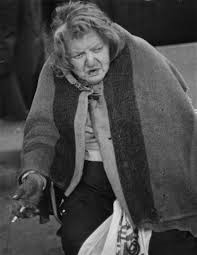 His eyes sharpened to see the withered, odoriferous woman closely eyeing him.

“If it means anything, old woman, that’s all I have.  I’m giving all I have to you.”  He’d never given all he had to anybody.  For anything.  As he turned to go on past her, intending to go up Commercial Way to the city’s highest bridge, he quirked his mouth again, raising his eyebrows.  Maybe the God he still sometimes believed in would take into account that his last act in this life was one of benevolence.  His dark, descending thoughts were interrupted by the ageless woman’s cawing, skrawchy voice:

“You were kind to an ugly old woman.  Look for the alley on your left when you’ve gone as far as you can go.”

Something about the way she said, ‘the alley’ stopped him, and he looked over his shoulder to see her eyes had taken on a singular intensity, almost seeing through him.  Then the ancient crone faded back into the shadows, indistinct, wavering as if a mirage laughingly floating above his hard-baked mood.

Disgusted and defeated, he walked ahead, scuffing his worn, scarred dress shoes.  Chuffing through his nose and mouth, he thought, I paid $149 on sale for these.  His shoulders sagged in the international sign for Flagrant Loser and he plodded on, paying little attention to his surroundings until after what seemed like hours he was brought up short.  A tall chain-link fence topped with razor-wire blocked his way.  Looking both ways, he saw it was firmly anchored.

Big diamond-shaped yellow sign.  Dead end.  How appropriate!  Great… just great!  Can’t even manage to remove my sorry carcass from the world with any class.  And when did they put THIS here?  I mean, COME ON, MAN–can’t I catch a br—-

Swiftly shaking his head as if trying to discourage a determined gnat, he stopped himself in mid-rant.  He remembered the strange old bag lady telling him–something.  Standing there with his hands grasping the steel fence and staring through it, he tried to recall her words.  Something like, “When you can’t go on, take the alley to your left”?  Was that it?  Something like that.

Looking left, all he saw was faded, crumbling bricks.  Solid bricks.  No—wait.  Back over his left shoulder, he saw the shadowy entrance to an alley.  Cautiously, he backed up until he was even with it.  It was hard to see very far into it because of the haze. . . which was odd, considering there was none anywhere else.  The interior of the alley seemed to be shimmering, filled with a drifting, powdery mist.

And it seemed to be drawing him.  Get real.  A stupid alley I never even knew was here and it’s inviting me in.  ME!  You betcha!  World’s Leading Amateur Human Being.  Cream of the crap.  Voted ‘Most Likely To Scare Little Kids And Puppies’.  Yeah, right.  He felt about as useless as a spray attachment on a clock.  Then he thought.  What do I have to lose?  The bridge will still be there, and I just gave the last money I had on Earth to a weird old stinky woman I never saw before.

He stood, thinking and now remembering:  “…when you’ve gone as far as you can go.”

Hesitantly, he turned to the only way left to go and slowly edged his way farther, deeper into The Alley. . .

Weird.  I do not remember this place, and I’ve walked past here a kazillion times lately.  Cars take gas.  When he’d gone a dozen or so more steps toward the soft, almost-sparkly glow he turned, looking back.  No light, not even the ambient kind from the street.  Frowning, he turned back.  This just keeps getting weirder.  Oh, well–in for a penn— he quirked his mouth, pushing his nose and eyebrows up.  I don’t even have one of those any more.

Startled, he jerked his head up from where he’d been puzzling through the past couple of hours.

The soft yet penetrating voice belonged to–

“How do you–  I’ve seen you somewh–  Okay, this is crazy.”  A feminine form stood before him, shimmering around the edges.  A light he’d never known and would never be able to describe seemed to emanate from within her.

“No, Arne, it’s not crazy, nor are you.  I know why you came here today, just as I know the sequence of events that brought you to that decision.  I know you’re feeling the lowest you’ve ever felt.  You’ve never been this low in all the time I’ve been assigned to you.”

Smiling, she said, “You don’t remember me, do you?” 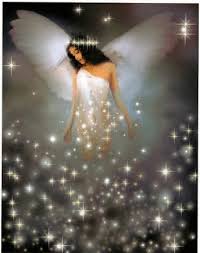 Stunned, he was looking at the same form but hearing the wrinkled, smelly old bag lady’s desert-dry voice!

Now soft again – and amused – she said, “When your heart-rate is back around normal, there are some pieces to your puzzle you’ve never known were in the box.  I’ll tell you a little about them.”

Jenssen’s deep purple funk had dissipated to where he could think.  “I . . . I think I’m okay now.”

They sat at a table under a light blue-pink-yellow umbrella in the afternoon warmth.  Her hair was in a loose ponytail held by one of those–what are they called?  Skrinchy?  A pair of designer shades with lots of bling was shoved up on her head.  She wore a dark green Packers t-shirt.  She also wore a highly amused smile.

“I’ll save you any further embarrassment.  No makeup; we never need it.”  Pointing with her forehead and looking at the steaming cup of coffee before him, she said, “Enjoy.”  She then sat back, sipping her own, watching him.

“Okay.  Here’s what I got so far.”  He automatically reached up for his newest-favorite EnerGel pen – a habit – and realized he, too was in different, clean, dry clothes.  And his signature sport jacket.

She smiled.  “I personally am a Green Bay fan.  I don’t suppose you noticed the greenish-gold tint to the mist in The Alley?”

He thought to himself,  Really?

She nodded.  “Really.”  He stared for a minute, then ducking his head to the left he said, “Oh, right-right.  Angel.”

Arne frowned, then, as the day’s events looped in his mind.  Before he could form his question, she spoke in a voice that was no louder but seemed to come from everywhere at once.

“We knew you had to hit the bottom before things would change – before we could help you change.  Feldwebler Briggs is now Feldwebler Briggs Jenssen.  The embezzled funds you were blamed for were found in the account of a senior partner whose office is now yours.  Your accounts have been restored along with your good name.  Your Mustang has been detailed and tuned and is in your private parking space, and the keys to your home are in the console.  Because of your promotion, the firm is paying for your all-expenses-paid 30-day vacation to Maui.  There are tickets for two, also in the console of your Mustang.”

He sat with his mouth slack.  “I don’t understand.  Everyone agreed the whole thing was my fault.  I knew I was innocent, but somebody went to a lot of trouble to pin it on me.  Cars…  house foreclosed…  job…  lawsuits… criminal prosecution… Wait.  You said two tickets.”

“She went right along with everyone else, blaming and accusing even when I tried to explain.”

In spite of himself he had to grin.  “Marlene Deitrich?”

She grinned back.  “When your phone rings, answer it.  That’ll be her.”

“But I don’t have a phone.  That’s something else they—-”

“You do now.”  Her form was beginning that strange shimmering again.

“But how do I know what to do from this point on?  They made sure I had nothing, was discredited, disgraced, disbarred . . .”

Her eyes took on that laser quality again.  “We’ve taken care of a lot of it already.  As for the rest?  We know you have a knack for handling it.  In fact, you could say it’s, ah, right down your alley!”  Note:  angels can really laugh!

“Wait.  One more question:  what is that coffee?”

Her grin was brilliant, the last thing he saw as the rest of her softly expanded into thin air.

As he glanced down at his empty cup, he felt the familiar buzz of a cell phone.  He hesitated . . .  Okay.  This God thing?  Whoever you are and whatever your name was – is – I’m going to need a lot of help:  but I’m in.  Thank you.

It was then he thought to glance up to see where he was.  Naw, that can’t–  He was sitting on the patio of Vaca’s Phoney Express, just across the street from the refurbished Breck Building.  Feldwebler Briggs owned the top four floors.

Arne smiled, genuinely smiled for the first time in a year.  No, that’s ‘Feldwebler Briggs Jenssen‘.  Has a nice ring to it.  He stood, automatically reaching in his left pocket to pay for the coffee.  Feeling paper, he pulled out some folded bills, extracting a $20 and handing it to the shocked barrista who’d just come to clear the table.

“The change is yours.  Make it a great afternoon.”  Might as well start the giving thing right now, hunh?

Thoughts of Mustang captured his thoughts, and he’d taken four steps to cross the street when the phone in his shirt pocket buzzed again.