“God does nothing except in answer to prayer.”

Whoa.  My brain skidded so fast those sitting close by thought I was wearing BURBERRY NASCAR.  I thunk to myself, God does nothing except in ans—

I wasn’t a wet-behind-the-ears kid.  We’re talkin’ mid-30s and in grad school.  The guy teaching the class wasn’t a lightweight, either.  He’d not only been in the trenches when it comes to praying and watching God move.

He’d dug a lot of them.  He’d spent most of his adult life living in places where depending on God to come through was never an option.  It was how he lived and survived.  It’s how he saw things happen for him and for others that defied logic, sometimes even common sense.  If anyone alive knew anything about praying and God’s responding to it, it was him.

This is the same guy who said the only validation to our praying is God’s answer.  I started adding those two things together and this is what bubbled to the top.

God answers only, yet always, when a child of His prays.

Ever said, “Aw, what’s the use?  God couldn’t care less.  He’s not listening.”  I did a few times.  I’m not proud of that.  But in my humanness that’s the way it all felt.  Seemed like things were so messed up even God was tired of my whining.  Why keep bugging Him?

Know what?  After hearing Dr. Wesley Duewel’s statement, I never said any of that again.

For a serious Christian, to not pray is lethal – for yourself and most certainly for others.  Remember all those ‘weird’ times of day or night you’ve suddenly come to – or been awakened – with the strong sense you needed to pray?

Somebody, somewhere needed the prayer CAP.  Any veteran knows how crucial is a combat air patrol over any operation.  It’s the same with us.

Would you like a better pastor?  Get to praying for the one you have.  Better job?  Pray over it.  You get the idea.  Right?

Pray.  Be a man, a woman of prayer.  Pray especially when it’s murky and confusing and doesn’t seem to connect.  Paul says jus’ keep own a-prayin’.  He was from sudden Tawsus.

So.  What’s going on in your life that needs help you can’t find?  Where’s there a real need you can’t meet?  A situation you know needs to be turned right-side-up?  An impossible person, an impassable event?

“Okay, wait.  I’ve prayed a couple times and nothing happened.  NOTHING.”

Billy Graham once said, “What God asks of men is faith. His invisibility is the truest test of that faith. To know who sees him, God makes himself unseen.”  He might’ve been considering what Paul was saying to the Corinth believers who’d been wrestling with some of these same concepts.

Listen to this excerpt from his 2nd letter:  “Even though on the outside it often looks like things are falling apart on us, on the inside, where God is making new life, not a day goes by without His unfolding grace. . . .  There’s far more here than meets the eye.  The things we see now are here today, gone tomorrow.  But the things we can’t see now will last forever.” (4:16-18)

I know, right?  We’ve all been in “Things Are Falling Apart Land”.  And there’ve been times when it seemed nothing was happening.

That’s right when I’m learning to double down on the praying – and thank God for what He’s doing.  Nope.  I didn’t say ‘for what He’s GONNA do.’

I’m 62.  Packed a lot of living in those years.  Been able to check the back trail and compare notes.  Look at dates and times.

It’s been right during those times I not-so-secretly accused God of coming down with severe Do-Nothingitis but pushed on through and prayed anyway that He was doing some of His most stunning work!

Here’s the deal.  When someone you know as a serious believer says to you, “I’ve been praying about your situation.  The answer’s coming”, you need to hold on.  They know what they’re talking about.  It’s not them; it’s God.  If your own faith is wobbly, then tie onto theirs.  Relax your grip, leave the timing, resources and means completely in God’s hands.  You keep praying, too, being assured of His definite answer.  And by all means . . .

God answers only, yet always, when a child of His prays.

I believe this to be a universal truth.  It’s why I consider it a privilege when He seeks my partnering with Him in praying.  It means somebody, somewhere, is going to see some amazing stuff happening in, through and around them because they had faith enough to ask God about it.  Sometimes details and specifics, but most the time just the request. 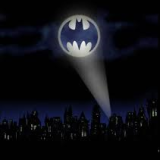 Yeah.  Kind of like a Holy Spirit-energized Bat signal.

And He asks me to join Him and them.  Now, how cool is that?

Is there ANYTHING you or I could do that’s of greater impact, that’s more help, than to be praying for one another?