Kids in their adult years have it down . . . Does he have a clue how–how hipster he looks?  And how many times is he gonna tell that same story?  And he barely functions with his smart phone.  And he’s just–he’s just so–   Wow.  Just . . . wow.

Dads see it before their kids can quickly hide it.  In fact, they’re keenly aware of it.  I know I am. 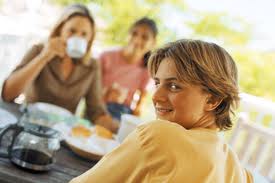 I was once the ‘adult kid’ immersed in my smugosity and stunning in my aura of amazingness.  I’m quick to pick up on it because I remember with red face my own judgmental assessing of my dad.

At the time I didn’t think he was paying attention, that I was getting by with my sagacious scrutiny.

Nope.  He knew.  He could read it.  There comes a time in every dad’s life when he knows his daughter has seen through his threadbare cape.  His son’s seen Dad’s hero spandex in the cruel light of day and found it horribly frayed and patched.

Dads know that look.  The recognition is bittersweet, for dads now know:  what they thought was 20- and 30-something brilliance was pathetically lacking.  Great portions of information about who and what their dad really was were redacted by God’s grace, common sense and their kids’ need to know.  I’m convinced many sons and daughters say “Good-bye, Dad – see you when we get Home”, never having truly known the real man, many of whose experiences go with him.

Huh.  There’s a reason one of God’s Original Ten says “Honor your father. . .”

Follows, then, a story from my archives.  I didn’t write it and don’t know who did.  Yet it speaks to the ultimate love of men who’ve earned the title, “Dad”.

Some years ago, on a hot summer day in South Florida , a little boy decided to go for a swim in the old swimming hole behind his house. In a hurry to dive into the cool water, he ran out the back door, leaving a trail of shoes, socks, and shirt as he went. He flew into the water, not realizing that as he swam toward the middle of the lake, an alligator was swimming toward the shore.

His father, working in the yard, saw the two as they got closer and closer together. In utter fear, he ran toward the water, yelling to his son as loudly as he could. Hearing his voice, the little boy became alarmed and made a U-turn to swim to his father. It was too late. Just as he reached his father, the alligator reached him.

From the dock, the father grabbed his little boy by the arms just as the alligator snatched his legs. That began an incredible tug-of-war between the two. The alligator was much stronger than the father, but the father was much too passionate to let go.

A farmer happened to drive by, heard his screams, raced from his truck, took aim and shot the alligator.

Remarkably, after weeks and weeks in the hospital, the little boy survived. His legs were extremely scarred by the vicious attack of the animal.  On his arms there were deep scratches where his father’s fingernails dug into his flesh in his effort to hang on to the son he loved.

The newspaper reporter who interviewed the boy after the trauma asked if he would show him his scars. The boy lifted his pant legs. And then, with obvious pride, he said to the reporter, “But check out my arms. I have great scars on my arms, too. I got ’em because my Dad wouldn’t let go.”

You and I can identify with that little boy. We have scars, too. Okay, maybe not from a gator, but the scars of a painful past. Some of those scars are unsightly and have caused us deep regret. But some wounds, my friend, are because God has refused to let go. In the midst of your struggle, He’s been there holding on to you. The Scripture teaches that God loves you. You are a child of God. He wants to protect you and provide for you in every way But sometimes we foolishly wade into dangerous situations, not knowing what lies ahead. The swimming hole of life is filled with peril – and we forget that the enemy is waiting to attack. That’s when the tug-of-war begins – and if you have the scars of His love on your arms, be very, very grateful. He did not and will not ever let you go.  – Unknown

As I sat considering how to apply this, it suddenly dawned on me.  My dad never let go, either.

Daddy never stopped hanging onto God’s shirttail in my behalf.  Every day there was a fresh email popping up on God’s iPad:  “DON’T FORGET TO BLESS DAN.  I WANT MY BOY SAFE.  I WANT HIM YOURS.  PUT HIM WHERE YOU WANT HIM AND  WATCH OVER HIM WHERE I CAN’T.  BLESS HIM REAL GOOD.”

Daddy prayed that way.  I heard him do it.

Because I’m not letting go, either.  The day doesn’t pass that I at some point am not ‘hanging onto’ my son and my daughters, praying over them and into their lives.  Praying God’s protection around them.

Just like the boy’s dad, I’m sure some of my efforts to not let go of my adult kids have not always been pleasant at the time.  Might even have hurt them, some.  Perhaps, though, later in their own adult years they’ll get it like every maturing dad or mom eventually does.

Those are love scars where he saw the danger and was trying to protect me.  I didn’t see most of it at the time and I’m sure I didn’t appreciate what he tried to do.

I hope one day my kids are able to see beyond the surface ugliness of the scars and be able to say of me, “I have some great scars, too, because my dad wouldn’t let go.”

I suppose there’s a place for polite, socially-soft praying.   “Father God, we just want to bathe in Your presence, Father God.  And we just bow humbly before You, Father God and just . . .”

But there’s another kind any dad worth the title knows well, when the predator’s jaws are gaping, unnoticed by the careless youth and with razor-edged teeth ready to snap shut on the heart and life of his boy or girl.

I hope that kind of passionate, fighting prayer is a lesson they’ll pass on to their kids.