* GOOD TIDINGS IN THE CLEARANCE AISLE

What am I doing in WalMart a week out from Christmas?

I stood there slack-jawed, blankly taking in the raucous din.  In the next aisle over a screaming kid was giving the lie to pop psych’s claims we should all be our children’s friend.

A few steps away three women stood gabbling, debating something or other in a language somewhere between Hmong and Klingon.  From the narrowed eyes of the one hogging the discussion, I figured it was a good thing I couldn’t.  From the un-narrow profile of the discussion hogger, the porcine identifier was more than appropriate.  I figured discretion was just about the better part of anything. 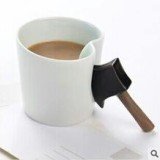 Harried employees tried unsuccessfully to navigate this teeming miasma of humanity in the attempt to stock and restock.  And again.

It was Roller Derby on steroids.

Seriously.  Why did I bother coming here?  To look at Christmas trees I didn’t have to decorate myself?  Or listen to Christmas music I didn’t turn on only to have to turn it back off?  Maybe it’s to watch people buying last-minute gifts and listen to the discussions of how Uncle Tad and Aunt Margie will like ’em.  Maybe it’s to just listen to people together, listen to their voices Doppler past on their way to the self-checkout.

Self-checkout.  Huh.  Something else I GET to do for myself.  ‘Tis the season, all right.  What a zoo.  Maybe this was a mistake because I’m in no mood to be here.

IT WAS ROLLER DERBY ON STEROIDS.

I guess I’d been walking while musing and found myself standing absentminded in the clearance aisle, halfheartedly looking at a—  Hm.  Rapala Crankin’ Rap lure.  Right.  Makes perfect sense.  What better time to practice casting than during a winter storm advisory?  Hungh.

“Interesting concept, isn’t it–cramming a whole aisle full of stuff no one wanted to buy in the first place.”

Startled out of my mental fog, I quickly swung around.  “Sorry!  I didn’t know you were there.”

As I said it I mentally sized up the speaker.  ‘Wally’ comes to mind.  Mousy.  Reminds me of— what’s that actor’s name?  Scrawny little guy, big glasses, overbite, big ears.  Huh.  Maybe if I’m polite I can lose ‘im.  I’m already in a foul mood, and—-

“Whatever pops into your mind when you think ‘Christmas’ and ‘peace on earth’, this (he waved a hand in a vaguely circular pattern) isn’t it, is it?”

“Nothing could be further from it!”

“YAH-ah.  Look around you.  What does THIS have to do with–with God coming down to us?  Looking at this mess, why would He want to?  I mean, if you were God, would you see this worth a second thought?”

The short, strange little man stood quietly, but the look he gave me was suddenly disquieting.    I didn’t give it much thought, though, because by then I was approaching Rant speed.

“Right over there’s a 50%-off animated Frosty the Snowman.  Do you see a manger scene anywhere?  There used to be outdoor ones all over, but not any more.  People used to be civil, used to show kindness, especially this time of year.  You used to be able to depend on—  There were people you used to figure were, I don’t know.  Solid?  Dependable?  Honest?”

I chuffed through my nose again.  It’s a habit I guess I picked up that’s a combination of nerves and knowing I’m committing unintentional verbicide.  Shaking my head, I glanced down at my odd little visitor.

Those eyes.  He stood silent for another couple of seconds, then:

“It’s a hard thing to realize you’re disillusioned, isn’t it?  Neither things nor people are the same.”

I didn’t immediately answer.  I was trying to work down the sudden thickness in my throat and hoped he didn’t see that my eyes were a bit moist.  Clearing my throat and sniffing, I tried it again.

“I do.”  Something in his tone had changed.  As I glanced down at him I caught that strange look in his eyes again.  I was, however, on a roll.

“Just a couple weeks ago I saw the TransSiberian Orchestra.  You know who they are, right?”  An amused, slight smile and a nod.  “Okay, now, that is a show.  That’s what we all paid to see.  Sure, they toss a sop of the Christmas story in there, but with TSO you get the whole deal:  laser lights, pyrotechnics, excellent musicianship, super stage presence, great costuming, stunning visual effects!”

He was the most intense listener I’d ever encountered.  “Go on.”

“Since when have churches decided The Show needs to upstage The Son?  They mouth the words but, trust me, it’s The Show.  They–they’re like Vegas wannabes, every year bigger and better and with more sparkle and glitter and stunning effects.  Well, especially around Christmas, I don’t go to church looking for The Show.  I’m there looking for The Son.  I’m there needing reassurance that His love was never conditional, never just lip-deep.”  I glanced down to see—Dude.  Your eyes …  You really need those glasses?  I mean–  I was still in Deep Rant Drive.

“I read something the other day.  It said, ‘Pay no attention to people’s words but to their actions and you’ll consistently know the truth.  It isn’t what they say that matters; they might even be lying to themselves.’  Well, seems to me God’s actions speak pretty plain.  When He says, “I love you” and then gives us a human look at Him through Jesus, up to and including dying like He did for me – for ME – I figure He means what He says because He backs it up.”

The funny little man with the piercing eyes moved slightly, drawing my attention.  He was looking down the Clearance aisle.

Since when have churches decided The Show needs to upstage The Son?

The little man spoke from memory:  “And it came to pass in those days that there went out a decree from Caesar Augustus that all the world should be taxed.” Pausing a second, he continued.  “This was the first census when Quirinius was governor of Syria.  Everyone had to travel to his own ancestral hometown to be accounted for . . .”  Okay, that was weird.  He started off in the good ol’ King James Version, then switched to The Message, and all from memory.  Oops.  Better pay attention.   . . .

“. . . and God’s glory blazed around them.  They were terrified!  The angel said, “Don’t be afraid.  I’m here to announce a great and joyful event that is meant for everybody worldwide.  A Savior has just been born in David’s town, a Savior who is Messiah and Master.  This is what you’re to look for:  a baby wrapped in a blanket and lying in a manger.”  Hey, wait.  That was her speaking.  Somehow she’d quietly, quickly joined the two of them.

The strange little man picked up the narrative:  “At once the angel was joined by a huge angelic choir singing God’s praises:  Glory to God in the heavenly heights; Peace to all men and women on earth who please Him.  As the angel choir withdrew into heaven, the sheepherders talked it over.  “Let’s get over to Bethlehem as fast as we can and see for ourselves what God has revealed to us.”  They left, running, and found Mary and Joseph, and the baby lying in a manger.  Seeing was believing.”

“Did you find anything worth coming in here?  The fishing lure, maybe?”  His smile was warm now.  I relaxed a little.

“Aw, no.  I guess it was just something to look at.”  I was just starting to turn away when he spoke again.

“Gabby, did you find anything suitable for a gift?”  Puzzled, I hesitated.  The pleasant little gray-haired woman smiled then, and for the first time I noticed the little wrapped package in her hand.

“Actually, I did.  It was way back there on the end cap, past the 75% markdown bin.  Here, Ben.  Merry Christmas.”  With that she placed the little green wrapped package with the silver bow in my hand.  Snoopy jingled merrily while I stood looking at what she’d given me.  On the little tag was marked, “FREE”.

Startled, I glanced around to see how my diminutive visitor was taking it and—he wasn’t there.  Odd.  I stepped to the corner, thinking he’d . . . nope.  Gone.  Hm.  Shrugging, I turned to thank Gabby and ask her how she knew my  only to see – okay, not see – her, either.

Sitting in the car waiting for it to warm up, my curiosity struck.  I opened the little package, tearing the green wrapping paper and pulling off the silver bow.  Inside I found a gold piece of note paper folded twice in half.

I sat there for just a few seconds, wondering about this whole thing that just happened.  Unfolding the note, I carefully read the handwritten words:

I know you’ve been seriously, permanently hurt and are finding it hard to trust anybody.  I want you to trust Me.  I’m not done with you yet.  Your best days and most vital work are ahead of you.

Thanks for the visit.  Oh–and if you think WalMart is bad just before Christmas?  You should’ve seen those shepherds when Gabe and the Heaven Mass Choir showed up!