The Adversary is real.  He’s a bully.  Bullies are cowardly and never fight fair.

You know what that means.

Satan – aka Lucifer, the Adversary – couldn’t care less about honor.  There are no even breaks where he’s concerned.  He can’t faze God so he’s after you.  You’d better drop all notions of “doing the honorable thing”, thinking there’s some kind of sacred field of honor where Good meets Evil on level ground.  This is unrestricted warfare; you might want to Google that and find out exactly what that entails.  Your eternal Adversary wants to destroy you and will use any means to get that done.

“Okay, hold up.  What are you talking about?” 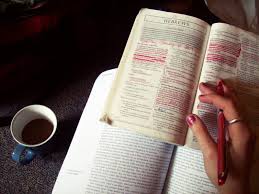 Read Ephesians 6:11-13.  A serious enemy who wants to kill you will look for your least-guarded and -protected spot.  He’ll time his attack for when you’re least likely to be alert and ready to aggressively shove it back in his face.  Your soul’s enemy, the adversary formerly-known-as-Lucifer, is serious.  Your only value to Satan is your inestimable worth to God.

Now, slow down a couple of seconds and read that again, emphasizing ‘only’.  G’head.  I’ll wait.

Your only value to Satan is your inestimable worth to God.

That’s it.  I don’t care what sugar- or power-coated promises the devil’s laid before you.  You don’t matter to him.  Once he has you cornered and ruined, you go on the slag heap with all the other rubes who also thought they were the exception.  And he laughs until his sides hurt at otherwise sharp people who have fooled themselves into believing he doesn’t exist.

Please get this:  Your only value to Satan is your inestimable worth to God.  He gets back at God by compromising and ruining you.  And he’ll do it any way he can.

He’ll use your job to cause trouble for you.  If you don’t have a job, he’ll use that to cause trouble for you.  Likewise, your children.  Or the fact that you are childless.  He’ll offer you billions; his only requirement is your soul, your reputation.  Or he’ll use your being without any money to enrage you and create more bitterness and spite.  He’ll figure out what your hot button is, what is really close to your heart–and keep at you until you seethe and instantly boil when it’s mentioned.  Even if that tender spot is a legitimate issue, your ‘instant insanity’ response will destroy you and discredit your point, damage your witness and any value that issue might have had with those listening.  Dodinsky wrote, “When faced with senseless drama, spiteful criticisms, and misguided opinions, walking away is the best way to stand up for yourself. To respond with anger is an endorsement of their attitude.”

Is any of this sinking in?

Example.  You know I am a Biblical Christian, meaning I accept The Bible as God’s Word to us all, telling us everything we need to know about how we’re to relate with God  and with one another.

You also know I have a big heart with room to spare for loving others.  That includes individuals with whom I disagree, sometimes often, as regards political, social and spiritual values and positions.  It includes persons who have chosen to disregard the authority of The Bible and may even deny God’s existence.

As a chaplain across the years, I’ve served, listened to and been supportive as part of the healing team for just about every type of person there is.  Some believed one way, some another – and some believed very little if anything at all.  When asked, I was always courteously honest about what is my spiritual ground of being and what I believe.  Yet my style was to let them see, sense and feel Jesus in me – my hands, arms, eyes, ears and voice being His for them during those crisis moments.

I never had one refuse to let me pray with them.  I never had one flame at me for being false, hateful, full of spite, arrogant or accuse me of being one or all of the fistful of -phobes usually hurled at anyone claiming to be a Christ-follower.

Malcolm Muggeridge said, “The depravity of man is at once the most empirically verifiable reality but at the same time the most intellectually resisted fact.”  One need not spend long in any city’s Level 1 trauma ER to recognize man’s innate depravity.  Admitting it, though?  That’s not so easy.  It presupposes there’s a remedy for it, which leads us to the reality of Good.  Then we edge into the whole deal of where Good came from.

That would be God, the Creator and sustainer of everything we know and especially what we don’t yet know.  Nothing else makes much sense.

“Okay, but by now, with all the screaming headlines and court cases reaching all the way to the national Supreme Court, you’ve got to know you have a target on your back no matter how you may love those who speak against what you believe.  Doesn’t that bother you?”

Of course it hurts!  You kidding?  It stings to be called disgusting names by people who don’t know me.  It really hurts when it’s from people who do know me.  Yet I’ll not stop loving them and doing my best to represent Biblical values in my world.

What do you mean, why?  Look, this isn’t exhaustive; I’m no dry theologian, nor even very much of an apologist.  I’m a follower, a disciple of Jesus Christ – and this is an appeal.  Opponents of His grace as outlined in The Bible have been tirelessly, sometimes vehemently doing their best to get laws enacted that go far beyond the freedom Americans already have to believe as they choose.

God’s laws – contained in The Bible – have been ‘on the books’ for millennia.  They are not confusing.  He has made them clear.  My mission, should I choose to accept it, is to live in obedience to them and Him; and to encourage others to do the same.  Note I say encourage.  Not coerce, force, demand, legislate or get totally radical and (shudder) unfriend anyone who doesn’t.

If I don’t have the personal integrity and mature enough faith to take my stand even if alone, then I must not truly believe it – wouldn’t you say?  What Christian witness is there in being a good egg and in the spirit of fellowship doing the same as everyone around me so I don’t stand out?

“Awkward.”  I know, right?  Yet at crucial times across history’s millennia that’s all it’s taken – one – to gently remind all looking on that God’s men and women always have been in a minority.  Why?  Because it’s not their power, authority or presence.

It’s His.  All God asks of us is that we be willing to simply, lovingly, firmly take our stand for and with Him.

That’s all.  Articulate the Gospel message of deliverance from that depravity of man so that those listening and watching have sufficient information to choose to accept or reject God’s truth.  Beyond that, it’s not my job to force or demand or destroy a friendship to make anyone believe what The Bible teaches.

“Wait, though.  The ‘other side’ sure isn’t bashful about forcing their denial of God and His law down YOUR throat.  They use the courts and outrageous public displays and even dishonesty to deny you the freedom to believe as you choose.  How does that even approach a level playing field?”

It doesn’t.  It’s lopsided, sometimes ridiculously, hypocritically so.  Everyone knows it, whether willing to admit it or not.  That’s not my issue.

Here’s my point:  believe or not believe; there is no neutrality where the cross of Christ is concerned.  As somebody who genuinely cares about you, I want you to understand both sides and be able to make an informed decision.  I want you to KNOW what – Who – you’re rejecting.

And, hey.  I don’t expect many to flock to this post.  Some will read a para or two, go “Mmph”, hit DELETE and go find something entertaining.  I get that.  And it’s okay.  Here’s my point:  believe or not believe; there is no neutrality where the cross of Christ is concerned.

My desire in this life is to be loyal to the Royal in me.  I am a disciple of Jesus Christ.  God has set before me His template for this life.  He’s not only blessed my choice to spend my life walking with and for Him.  He’s intervened in supernatural, extramedical ways to give me another life, another career.  I’m grateful, and I am using all means and experience at my command to live out His love as honestly and faithfully as I can.  And that means there are times I must respectfully point out misrepresentation, omission or untruth when enemies of Christ’s Gospel speak against it.  Ella Wheeler Wilcox:  “To sin by silence when they should protest makes cowards of men.”

I stand where it’s needed, sometimes forcefully so; but never without love in my heart for those with whom I differ.  I hope and I pray my thoughts, words and living will honor this King who gave so much to free me.  I don’t need a phalanx of attorneys to plead my choice.  All I require is a clear picture of Who God is and who He wants me to be being.  “Wise people, even though all laws were abolished, would still lead the same life.”   Aristophanes said that.  His were the last of the ‘Old Comedy’ plays in Greek culture and were characterized by bold fantasy, merciless invective and outrageous satire, unabashedly licentious humour, and a marked freedom of political criticism.

Not exactly what you’d expect from the second pew, piano side.

I don’t need thick volumes of laws to direct my daily life.  I don’t care what others think is okay to do, say or think.  I will live according to the personal convictions I feel best order my days.  I don’t need high dividers to keep me in the center of my lane.  And – AND I am willing to grant that same freedom of choice to those who have chosen to live in other lanes.

That does not mean I agree with them, nor does it mean I’ll be less willing to show God’s love to them while supporting His Word and what it says.  Their ire and argument is with Him, not me.

So, why keep it up, knowing I’ll get picked and poked at, anyway?

I do care.  I do love as best I’m able as God does.  It is my sincere wish that all who have been so angrily opposed at what God’s simply laid out in His Word would give it an honest try, discounting those who profess Him whose witness has been less than, ah, stellar.

God is a gentleman; He does not, will not force you to do the right thing.  Yet life has a weird and funny way of making you wish He had.  I, too, am a gentleman.  You’ll note, thankyouverymuch, that I did not drown you in Scripture.  What I did give you ought to give you enough perusable pasta to fairly think it through.

No matter who you are or what you believe, I believe in you – and I love you.