Dads and their girls have special relationships.  God intended it that way, since those would be the very first guys in their lives.

My girls are precious to me.  I pray more for them now that they’re adults than I ever did when they were their cute Lil’ Sneakums selves.  And I remember doing a LOT of seeking God’s wisdom as my girls were growing up.  When they were little, I could make them mind.  Now, all I’m able to do – all any parent of adult kids can do – is offer suggestions and guidance in the fond hope a little might sneak through their defenses. 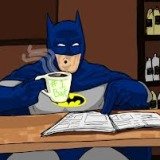 They’re adults, after all.  Dad’s no longer Superman, The Lone Ranger and Chuck Norris.  And Papa Murphy.  They’ve long since looked behind the curtain and seen that The Great and Mighty Oz is nothing but a slight-framed, unimpressive, grey-haired, wrinkled young guy in an old guy’s bod whose halo would’ve long since been turned in for a rebate.

If you know me at all, you know I don’t let any of you get by with ‘just’ type statements.  You’re never ‘just’ anything.  Yet I have no defense against them.  I love my girls; I’d fight for them, give my life to save theirs.  When all has been said and done, the spots are off and popping as they cool, the mics off, the stage empty and the curtain closes those last few feet–if I can get on The Bus knowing they’re both on their way toward Home I’ll consider my role well-played.  All the applause attends to the One Who is writing my story.

This isn’t about them, though in general terms it should all apply.

“If this was the last thing I could tell him, what would I say?”  I went up and down, back and forth,  on a mental teeter-totter like a real one I recall from boyhood that also swiveled.  You could go up and down and around at the same time, whirling faster and switching directions until you both hurled what was left of your morning snacks.  It was cool.  It made room for more.  We thought we had our moms fooled at how much we could eat.

This is my son’s 33rd birthday.  I know his journey as only a dad can.  Where my kids were concerned I chose early on to move beyond mere fatherhood, edging out onto the thin ice of Dad-dom.  That only goes so far with the girls; some things I could not – in some cases would not even attempt to – teach them.  That was the aegis of Babycakes.

I laid there this morning, early, with “I will rise when He calls my name; no more sorrow, no more pain” playing in the background like my own private reserve of Dandora.  I rarely lay awake, preferring to be up and doing what Mama used to yell at her TV family:  “Wayull, WAKE uup an’ smayul thuh CAWFEH!”

I did this morning.  Lay there, I mean.  I was asking myself, in God’s presence:  “If this was the last thing I could tell him, what would I say?”  I went up and down, back and forth,  on a mental teeter-totter like a real one I recall from boyhood that also swiveled.  You could go up and down and around at the same time, whirling faster and switching directions until you both hurled what was left of your morning snacks.  It was cool.  It made room for more.  We thought we had our moms fooled at how much we could eat.

“So what did you decide on?”

Queasy, huh?  I get it.  Okay–here’s what I decided to tell him if I only had time for one thing.

“I am not ashamed, because I know whom I have believed, and am convinced that He is able to guard what I have entrusted to Him for that day.”  It’s in 2 Timothy 1.  There’s a lot more there, yet this is what I’d want the little boy I was training to be a man, a husband, a father and dad and mentor to know.

You see, I really do know Whom I’ve believed.  He’s not a fable.  He’s a Person with whom I have a very real relationship.  And I really am convinced He’s able to guard what I’ve given to Him and hold it in trust, in my name, until I get There.  See, I’ve given Him plenty of reason to think His investment in me might not bring such hot returns and cash my account in.

He won’t ever do that with you, either.

So, no, I’m not ashamed, son.  The foundation upon which I’ve built my personal faith in God through Jesus has never been more permanent than it now is.

“I couldn’t be more sure of my ground–the One I’ve trusted in can take care of what He’s trusted me to do right to the end.” [The Message].

If the end is tomorrow or 2054, the answer’s always going to be the same:  “Noop.  Still glad I made Jesus Lord of my life.  No regrets!”

And, son–AND don’t you dare have any, either.  As much as I love you, there will be times you will need me when I can’t or won’t be there for you.  That’s never the case with God.

You can absolutely depend on Him.