Don’t you get a little tired of slick, smooth types who never directly answer your questions?  Who give the impression everything they think and say revolves around some set of popular talking points?

Wouldn’t it be simpler and cheaper to just carry a small vidcam around and whenever asked questions, just whip out the pre-recorded clip of you reciting your recycled talking points originally cited by somebody else who was parroting somebody before that?

We’re working through 28 Ways To Absolutely NAIL “TREMENDOUS”!  You’ll find numbers 1 – 9 in the archived 2nd Cup posts.  Each number shows the content in the title, so let’s get to it.

“Walk your squawk” means to be living your values each day so people who don’t know you can ‘get’ you from watching you for awhile. 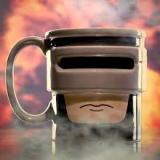 We all know talk is cheap; the supply far exceeds the demand.  Even as far back as Adam & Mrs. Adam on Eden Circle, Eve knew the rules.  When Lizard-lips taunted her by misquoting God’s clear ruling, Eve never even blinked.  She just inhaled, and laid the rules out there.  329 words per minute.  Gusting to 650.

She knew the rules.  She just wasn’t keen on living them.  Adam went along with it because, see, Eve was a total fox.  Nope; no excuses here.  Adam definitely knew the rules because he’d taught ’em to Eve.  He taught so well that she could rattle them off to Double L without taking a breath.

There’s a world of difference between knowing rules and living them.

“Okay, but what if a person’s values don’t agree with mine?”

Nobody said they had to.  I have enduring friendships with persons who think my values are too strait-laced, too conservative (using the term in the pejorative sense they do) and likely too narrow between the ears.  They tend to toss me in the same bin as factory seconds from The Phobic Wars.  Think I’m a hater, etc.

Ever wonder what drives people who write, “etc., etc., etc.”?  Does not a single ‘cetera’ suffice?  Who ever heard of an ‘et cetera’ train?  “Oh, yeah?  Well, I can out-cetera you ann-neee day of the week.”  Somebody wrote recently there ought to be a social medium dedicated to persons with zero grammatical ability and who cannot spell.  Suggested name is Fasebuk.

“Well–well, I just don’t want to offend anybody.”

News flash!  You are definitely going to offend somebody today.  Some people come preloaded with shoulder-chips, just looking for a likely target.  Really.  There’s a point where political correctness needs to stop dictating anything to anybody.  It’s been weighed in the balances and found ridiculous.  Though the original intent might have been noble, carried to its logical conclusion it is untenable.  Does not work.

Your aim should never be to not offend; it should be to be being authentically loyal to what you really believe–and living it.

And if you find what you’ve been believing really isn’t a true fit?  Make the adjustments necessary and walk on.  That means you’re growing.

Our core values do not need to exactly align for me to love you, care about you and pray for you.  I’m amused at the thought that any two of us would have exactly, precisely the same ideals, values and personal convictions.  Go ahead and try to build a group of any size comprised of peeps who all exactly agree.  I want to watch.

My plea here is not for uniformity, but unity.  Good men and women who did not see eye to eye resisted, fought, bled and died to create liberty and unity – not uniformity.  And in the doing, they made clear that though they never saw things exactly the same way, they were clear there’s a price to be paid for attempting to merely coexist with anyone and anything.

Only fools desire to coexist with evil.

Walking your squawk means to have your colors on display.  Back up your mouth with your feet.  Let those around you – especially increasingly-disillusioned youth – see the worth of men and women who walk what they believe.  Men and women who aren’t bothered in the least by someone pointing a finger at them and calling them names.  Don’t get smug.  I’ve watched good, solid people destroy their influence, effectiveness and even their Christian witness by reducing themselves to a single-issue harpist.  Their attitudes become increasingly harsh and strident, all but forcing those listening to discount what might otherwise be worth hearing.

When the rest of the herd is drifting in one direction, the individual who dares to turn around and walk the other way is seen as the misfit, the radical.

And if that person happens to be right?

Gandhi said, “Seven blunders of the world that lead to violence: wealth without work, pleasure without conscience, knowledge without character, commerce without morality, science without humanity, worship without sacrifice, politics without principle.”

Seriously?  And you’re from which planet?  If you’ve reached college years, you have a fairly good handle on the things you basically believe.  Things for which you’d exchange your life.  Mountaintops upon which you’d raise your flag and take on all comers. 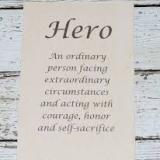 Yeah.  It is.  Our sons and daughters desperately need to see authentic examples – patterns – of who, what and how men and women are.  We’re seeing the results of decades of effort to produce metrosexual, androgynous anybodies so intent on being everybodies that they’ve been reduced to nobodies.

All of those nonconformists are starting to look, act and sound alike.  It’s time, and maybe past time, for us to allow our kids to know:  there are still honest-to-Pete (and Patricia) heroes and heroines out there.

Be unafraid to be one.

Be walking your squawking!