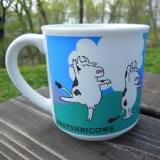 Didn’t register.  I stood there, waiting for clear directions.

I got it that time, got the curtain open just in time to see this powerfully-muscled man spring out onto the stage.

He was a member of a Russian ballet troupe touring the U. S. and they’d agreed to stop in – of all places – Hermiston, Oregon.  One of the teachers – probably Bill Frazier, our drama guy at the time – said they were coming through, had agreed to perform, and they needed volunteer stage hands, etc. to help.

I’d never seen ballet other than brief clips on black and white TV.  Knew nothing about it.  I volunteered.

See, ballet was dayansin.  Good, God-fearin’ folks just didn’t dayance.  Nothin’ good comes from all ‘at gyratin’ and sweatin’ around.  No roller-skatin’ rinks, even though Rolly’s Roller Rink was a pretty nifty place to gather and have fun.  Didn’t do none ‘o’ that.  “Don’t CAHR.  We ain’t havin’ none ‘o’ that fun steff hereabouts, neither!”  Hmp-Mmm.  I didn’t smoke an’ I didn’t chew, an’ I never went with gurls that do–hallelu, hallelu!  And the movies?  Don’t even git me stahrdid!

Well, I was a closet rebel, I guess.  Ever since I’d been smitten down to my socks by Linda Lee in 2nd or 3rd grade, I always dreamed of her in what I called “a dancing dress”.  I found out later that skimpy little thing was called a ‘tutu’ and was associated with something called ‘ballet’.  Never did get the sense in those women always tippy-toeing around like that.

Why didn’t they just go find some taller women?   ‘Course then they might have to wear three-threes.  Or—well, you get the idea.

Out in eastern Oregon cattle and wheat country, Hermiston was home to around 5,000 souls back there in 1970.  Our idea of a skyscraper was the old PGG grain elevator.  Or the water tower. Think ‘western town’.  Now connect ‘ballet’ with it.  Like trying to milk a steer.  Don’t match real well, seemed like.

That’ll explain why I stood there, rope in hand and ready to open or close the curtain on command, eager to please these men and women from halfway around the world, waiting so intently to hear the command I never recognized it when it came.  I was waiting for the principal dancer to drop the other boot.  I think he probably had in mind a couple of other places to put it by the time we were done working together.

“Heh!  Evgeny, you should’ve been beink dere!  Hah!  Fenceposts smarter I haf seen, no?  Lookink adound I vas for Miss Kitty and Fester!”

“Dat’s ‘Festus’, Doofus Dingus.  You not vatch Rawhide?  Shakink my head-a now I am!”

Waiting so intently to hear the command, I never recognized it when it came.

Proverbs 29:18 says it:  If people can’t see what God is doing, they stumble all over themselves . . .  That was me, back there behind the cair-tun, ‘helping’ the dancer/actors whose patience I know I tested.  I’d like to tell you I’ve greatly matured since that time.  To say I now recognize that much goes on behind the curtain, back in the wings about which I know nothing.  I’d like to relate how often I’ve accepted that God’s at work especially when I don’t see anything happening.

Truth is that I don’t read the other half of that proverb nearly often enough:  “. . . But when they attend to what He reveals, they are most blessed.”

Ever caught yourself throwing yourself across your bed (because hitting the floor hurts like a dog and we’re trying to influence God here, not collect another few bruises), yelling at God, throwing a conniption because you can’t see what He’s doing?

Maybe the question ought to be, “How long ago was the last one?”

I’m smiling because we’re all like that.  Sure, some are more experienced in faith matters and do it less.  But we all occasionally get high-centered when we can’t see what God’s doing, spinning wheels and getting more stuck.

The other half of that verse gives the answer.  “Dan, if you’ll just pay attention to the part you DO see–the part I am revealing to you–you’ll find plenty to keep you busy.  Remember all the hustling and scurrying behind the cair-tun?  Nobody in the audience ever had a clue all that was going on.  All they knew was the cair-tun was closed and “nothing was happening”.

Intermission.  Bathroom break.  Time to check email or see who ‘Liked’ you on FB.  Work on the shopping list.  Add to the mental ‘honey-do’ column that never seems to diminish.  Wonder why the trimmer isn’t wanting to run.  What to have for dinner . . .

Naw.  He never answered.  Didn’t need to.  Just using that Slavic pronunciation was enough to remind me:  there’s always-always-always A LOT going on behind the scenes I never see and about which I know nothing.

That part’s not my responsibility; I need to leave that in His hands:  means, timing and resources.

The part He reveals?  That’s mine.  And I usually find it’s plenty to keep me occupied. 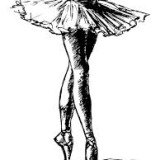 I went home after that ballet and tried standing on my tippy-toes.

Hee-YAH-ah.  Try a thirty-two.  The steer would look better.