As I signed off I wrote, “I love you and I’m glad you’re my friend.” 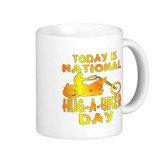 The person to whom I wrote that signoff is easily my alter-ego.  Think ‘Dan’ and do a 180.  Right toe behind left heel, turn to your right, simultaneously swiveling on right toe and left heel.  If you’ve placed your right toe in the correct spot, when you’re finished with the about-face, you’ll be pointed in exactly the opposite direction.  Your heels should tap together and your toes should be aligned.

As with all comparisons, this one isn’t totally true.  But if you were to approach Central Casting to find a couple of people for, say, a TV commercial who are almost exact opposites, that’d me and Lori.

I’m not into bikes.  They’re her primary mode of transportation.  I’m straight.  She’s gay.  I’m a thoughtful conservative.  She’s a thoughtful liberal.  I let ranters and flamers rant and flame.  She lights their fires to watch ’em burn, occasionally dousing ’em with a little extra literary or verbal kerosene.    I’m a Biblical Christian in my worldview.  She’s an agnostic theist, as close as I can assess.  She passionately follows posts and blogs to which I give little or no shrift.  I return that favor.

180.  You get the picture.  Some single-celled creatures could find grazing space in the little sliver of common area where our two social/spiritual/philosophical circles overlap.

“So, that means she hates your guts and you can’t stand her.”

We’ve all become spoiled rotten in our attitudes about love, mutual respect and shared esteem.  Polarization has not only been expected.  It’s been fomented, manufactured and shoved down our collective throats.  Don’t love?  Well, then you must hate.  Not 100% for?  Then you must be 100% against.  Can’t agree with me in this matter?  Then you agree with me NOwhere and we must therefore be sworn enemies.

Polarization is big business in 2014 America.  It will remain so until you and I stop it.

Recently on a Facebook post a friend of Lori’s raised this question.  The subject matter related to social ills such as abortion, gay marriage, and most other hot buttons guaranteed to set people on one another like a couple of Vick’s pitbulls.  There seemed to be genuine pathos about the way folks who say they love in Christ’s name seemed so intractable and harsh in representing – or speaking to – that love.

The prevailing thought seemed to me to be that merely saying, “Christian” was tantamount to vile, putrid sepsis that needed cleansing from the rest of society.  That otherwise good persons should be somehow shielded from the mean nastiness of Puritanical, unreasoning Jesus people.

To present that is just as lame and unrepresentative of most Christian men and women as to label anyone calling themselves a Liberal as a three-horned demonic representative of Hell itself.

Polarization is, I repeat, big business in 2014 America.  It needs to stop.

You see, Lori is my friend.  We see eye-to-eye on a few things.  Fortunately, we established long years ago that our differences would be our combined strength.  Lori is one of the oldest 2nd Cuppers around.  When I was a young USAF 2-striper serving dual duty in Havre, MT on BUIC systems while stationed with the 24th NORAD unit at Great Falls, she was a young troop serving that same duty at Fortuna AFS a few hundred thousand acres east of us.

In common?  Nothing you’d recognize.  We’ve never met in person.  Wouldn’t recognize one another were we to meet in, say, Springfield MO at Classic Rock Coffee out on West Sunset.  Oh, we’d figure it out since we’ve seen each other’s pics on FB.

Might take a few minutes, though.  I don’t do biker chic.

Long-lost pals, though?  Nope.  But I mentioned earlier that we see some things from pretty much the same point of view.  One of those is observing persons who ought to know better showing spite and hatred toward one another, and allowing others to do so without censure.

I also mentioned social issues that easily become flashpoints because we let them.  Lori and I don’t agree that we have to be disagreeable with one another to disagree about issues.  Nor do we agree that the best way to deal with one another is to major on things that, while of themselves are important, are not germane to the largest and most urgent battles of the day.

No.  I don’t like abortion.  I’ve held fetal demise patients – perfectly formed babies – literally cupped in one hand as I blessed those little ones in the presence of heartbroken parents, many of whom spoke little or no English.  I’ve assisted in officiating at quarterly burials of fetal remains of aborted/demise patients.  Do I get my back up because Lori thinks women have the right to create more of those tiny patients?  No.  Abortion is an issue on which my friend and I don’t agree.  Yet our friendship is built on our agreement that we will not let those differences separate us.

I could go on.  The point is that where we do agree is that there are some huge, looming issues that far outweigh and overshadow specific social issues.  I mention the naked avarice and systematic rape of our national economy by partisan lightweights of every stripe whose seeming only desire is to raid the candy store of as much as they can carry off before being kicked out, chased home and spanked.

Where we do agree is the need for politicians to exit and statesmen and -women to replace them.

We agree it’s high time to stop screaming insults at one another like 8-year-olds; stop dodging personal responsibility and individual integrity by ducking behind race or gender in any direction; and start operating in terms of character and principle.

But enough about Congress . . .

Reading the other day, I came across this:  “Thank you for searching your own heart before breaking someone else’s.”  Just another way of saying, “Look at it through my eyes and you might see things a little different.”

How can I love you when you’re SO not like me?  We could ask the same thing of God:  “How can You love me when I’m SO not like You?”  Answering that shows why God’s grace is always called ‘amazing’.  None of us ever earned it, no matter how we might like to imply otherwise.

“Me?  Be God?  Oh, NO-ho-ho…”  And while talking, be surreptitiously eyeing the Trinity for the  possibility of a vacancy.

Earned God’s love?  Take a careful look at my life, baby.  Rode hard and all too often put away wet.  Definitely traveled some rough roads; not only weren’t some of them paved–more than a few were just dirt.  I’m no lily.

Neither are you.  Who of us ever is?  You want some extra campaign ribbons because you’ve had a boo-boo or two in this life?  Well, get in line, Skippy.  You’re just one of a whole bunch of us.

The forgiveness through grace – unearned merit and favor – given to me and to all who receive it through Christ comes because God loves, is the very embodiment of love.  That love may need to be of the tough variety on occasion–but that does not make it any less love.

Being enraged at God over the foolishness of some who claim His name is as misplaced as being enraged at Sears because of the dismal customer service of one of its local employees.  God has left us His code for living in the pages of the Bible.  Some of us choose to live as best we know how according to that code.  Some choose to disregard or ignore it.  Those are both personal choices, and though choices always have consequences, we can hold one another in esteem.  We can choose to love and appreciate one another while disagreeing about Biblical precepts.

Merely because you don’t believe the same way I do is zero cause for me to shun or despise you.  It’s our shared liberty and freedoms that allow us to believe or disbelieve according to our own lights and get along together without demanding the other come our way.

I’m not threatened in my personal faith as a follower of Christ because LORI doesn’t think exactly as I do.  And she doesn’t lose any sleep over the fact that DAN doesn’t agree with her views on owning personal defensive weapons.  Yep.  We’ve all become spoiled rotten in our attitudes about love, mutual respect and shared esteem.

So?  I’d guess my old friend and I, whom I’ve never met, would find a lot more on which we agree than either of us knows–IF we’d make the time to siddown, take a load off and visit awhile.

Hmm…  Lori, something tells me you might be a Raspberry Beret kind of person.  Me, that Sulawesi Tana Toraja with the honey, cranberry and juicy mandarin orange and espresso keeps calling my name.  Then we can get down to some serious Tanzanian Peaberry blend.

And would you stop with the “Udn, Udn”, already?  I heard those pipes when you rode in.