We modestly say things like, “Well-l-l, I could be wrong, but . . .”  Translated, that usually means, “If your insignificant mind had even a Dixie cup full of the truly amazing mental acuity of THIS stunning jewel of God’s favorite grey matter . . .” 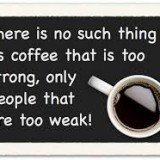 We all have our own ideas, our personal notions and beliefs.  Our core values.  Our own privately-held articles of personal faith.

Our choices.  Mine.  Yours.  Neither of us let go of them without a compelling reason.  It makes sense, then, to establish them carefully from the beginning.  That always works better than to raze them at a later time and be forced to sift through the rubble and rebuild.

Two statements from Proverbs 13 stand out:

It’s impossible to coexist with flies.  They hog your attention, even if alone–which, by the way, they are not for long.  Oh, for awhile you might get by trying to ignore a buzzering, disgusting fly but you can’t keep it up.  Fly won’t let you.  Fly invites his people”

You know the answer.  KILL IT.  Stop trying to understand it, get along with it, coexist with it, learn more about it, wish it “Namaste” or sit singing songs to it.

Don’t want flies in your way?  Kill them.

As a young man I was greatly influenced by former UN Secretary-General Dag Hammarskjold.  He once wrote, “He who wants a tidy garden doesn’t reserve a plot for weeds.”  That stuck with me.

He who wants a tidy garden doesn’t reserve a plot for weeds.

While thinking and praying about this in the wee hours of today, I asked myself again:

The nature of weeds and flies is that they need no encouragement, and they don’t stay by themselves.  They always outgrow wherever you try to control ’em.

There is a difference between mature tolerance and careless acceptance.  I’ve done them both.

“Okay.  Now, we all know you only gave us the first part of those verses, right?  Wanna drop the other flip-flop?”

“A-ight.  So you’re sayin’ we always have a choice in what we allow, and eventually allowing the wrong stuff winds up controlling us, not the other way around.  That cover it?”