As soon as it’s cooled down, everybody knows it’s wise to clean out the fireplace and lay the makings of a new fire.  That’s what fireplaces are for. 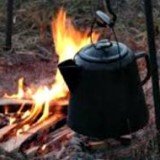 Even gas fireplaces are made to resemble the woodburning kind.  Well, except for those sterile, stainless-and-glass contraptions having all the warmth of a hunk of rusty rebar.  Can you say “Magnus, Robot Fighter”?

Okay, who said, “WHO?”  Have you no appreciation for the classics?  Gold Key Comics, 1963?  Seriously?  Well, see, in the year 4000 North Am is one continuous megalopolis.  Society has become completely dependent on robots for everything, encouraged by H8, a civic sector-controlling robot whose damaged circuits make him want total control of robots over all humanity.  Magnus is raised by a benevolent robot, 1-A, recognizing the inherent dangers outlined in Isaac Asimov’s Three Laws of Robotics, and—

No.  It really isn’t so farfetched.  Check your headlines under science and technology.  Russ Manning was a visionary.

Social scientists call it progressive thinking.  New ideas.  Innovation.  Truth?  The more we innovate, the more we find ourselves traveling in self-important circles.  We find it hard to believe that anyone who lived prior to our birthdate could have been half as brilliant.

Solomon said it:  there is nothing new under the sun.  The Wisdom writings he compiled were not new; they’d already been around awhile, even in 3000 BC.  All Solomon did was collect them and write them down.

If I’m not careful, my heart can get to resembling those showpieces.

As if I had anything whatsoever to do with my heart being clean and forgiven before God.

“You’re such a spiritual strength.  I love being around you because you’re such an inspiration!”  Thankya.  Thankyaver’much.  Mercy-y-y. . .

Well, we’re getting warmer.  It’s all about mercy:  God’s mercy.  The only thing I can lay claim to is having had enough sense left to recognize my own hopelessness, turn to Jesus and accept His gift of cleansing and forgiveness.

It’s also about being real with God and myself.  Because this is a personal relationship with God, it’s an ongoing, daily reaffirmation of my love for Him.  This breathtaking goofyness on stilts about, “Hey, I said yes to God back there an’ nothin’s gonna change ‘at” makes as much sense as saying, “Yep, been married forever an’ everthang’s jist fahn.”  Even with GPS and redundant electronic gadgetry beyond description, there’s a reason ships still have a helm and helmsman.

Collecting exotic, fragrant firewood so your fireplace looks good makes as much sense as Solomon collecting every wise saying he could get his hands on just to show them off.  He’d have been much farther ahead to stop collecting and begin living by the ones he already knew.

Me?  My fireplace?  I’ve about used up all the pine I collected last year.  Oh, it’d be nice to have some more.  I grew up smelling pine wood burning.  Yet what I have now that’s stacked out in the back against the fence is whatever I’ve been able to collect.  Whenever I hear of someone cutting down a tree, I volunteer to go and get what I can, bring it home and split it, little by little, leaving it to season, adding it to the stack of assorted wood already there.

Don’t have a clue.  Little of this, little of that, and just enough hedge to keep things lively.

Sure.  I’d love to have some more fragrant stuff to burn.  But I’m finding it’s a whole lot more beneficial to my daily relationship with God to quit worrying about how wonderful it looks to others, and just keep the fireplace in my heart prepared and be constantly praying . . .

It’s nice to be impressive.  Yet I’d rather be good in God’s eyes than merely look good in yours.