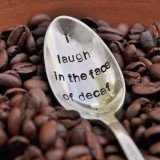 Reaction: When do I get to talk about the $1,000 I lost and why aren’t you  wanting to listen to my telling you about it? That’s why I brought it up.  I need to talk about it!”

Your Response: “Seriously? Well, I lost $3,000 there a couple of weeks  ago and you know what happened? Let me tell ya what happened, I…. -BLAH! BLAH! BLAH!”

Reaction:  Same as the reaction above, only now, “Why are you taking the football out of my hand and running for your own  touchdown?  I thought we were on the same team.  Who’s helping whom, here?”

#3. A DRAWING & ENCOURAGING RESPONSE – Or, “Can you help me understand what happened?”

Your Response: “You did? How did you do that?”

Reaction: Now I get to talk further about what I first introduced to you because you want to listen to what I want, maybe need, to say!  Good!  I already feel stupid and am hating to admit what I did.

#4. AN EMPATHIC, FEELING RESPONSE – Or, saying nothing at all works just fine.  If you care, they’ll know.

Your Response: “Ouch! That’s a chunk of change!  That probably wasn’t what you planned, huh?”

Reaction: Now you are asking me how I felt about it, rather than what happened.  I feel like you’re standing by me, not confronting me.  I’m not feeling judged and am free to tell you how I feel about losing that money, why I risked it in the first place and how much it meant to me. Wow!

Number 1 is characterized by people who seldom listen to your entire statement.  Reason:  they’re still focused on what’s important in their mind.  It doesn’t have to make sense and rarely has anything to do with what you just said–maybe at a cost to yourself for baring it at all.  You may have waited hours, working up the courage to say something.  Number 1’s are not only puzzled why you suddenly stopped talking; they’ll usually laugh off your reason as being absurd.

“That’s just silly!”  No, it’s not.  If you’re a #1, take this to heart.  For whatever reason you’ve become self-absorbed to the point what others have to say has little value to you.  Your own concerns are front and center; when you see someone addressing you , you don’t hear.  You’re just waiting for a spot to interrupt.

Key in on this:  some people really don’t like that.  And don’t be surprised when you find their confiding in you tapering off.

A number 2 is a mild form of number 1 and hasn’t yet become a total jerk.  If you’re a #2, be aware you’re sliding into Total Jerkdom.  Study Numbers 3 and 4.  Ask yourself how you come across when listening to others.

If you’re still not sure, record your conversation sometime.  It’s often both embarrassing and enlightening.

The ticket, friend, is to move completely away from being practicing #1’s and #2’s.

Industrialist Henry Kaiser once said, “I make progress by having people around me who are smarter than I am – and listening to them.  And I assume that everybody is smarter about something than I am.”

Being thrilled with the sound of your own voice and not listening is a dandy way to wind up old, drawn and alone.