I wasn’t very proud of myself after that event.

It was during my senior year of high school.  Our mixed ensemble was singing for some local gathering, and since it was my last time singing with that group I quietly arranged for us to stand in such a way that I’d hog attention. 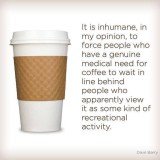 What?  Too harsh?  No, it’s not.  That’s exactly what I was doing.  And after we sang the other members of the group took me to task for it.  And should have.

The naked truth is that a chapter of my life was ending, my introvertive nature had kept me from stepping up and doing more things, and my four years of high school had been for the most part completely forgettable.

I didn’t like it.  I knew there was more in me than I let out.  I could have done and been more.  But there was another ugly issue writhing around beneath those other perhaps more noble concerns.

I didn’t like playing second or third or ninth fiddle.

Exodus 17 tells the story of a guy named Hur who we’d otherwise never have known existed.  Seems the people of Amalek were sworn enemies of Israel and decided to shoot some rockets over into their camp, lob a few mortar rounds among Israel’s tents to soften ’em up, and attack Moses and the people of Israel.  Again.

Moses told General Josh to take his army out to fight Amalek while Moses and his aides, Aaron and Hur, went up on a viewpoint to observe.  Moses took THE STAFF with him.

They soon figured out that when Moses raised THE STAFF over the battlefield Israel was stomping them.  When he got cramps and had to lower his arms, the tide of battle turned.

Aaron and Hur pulled up a rock for Moses to sit on, and they each took an arm, holding Moses’s arms – and THE STAFF – up.  Israel soundly messed up Amalek’s army and sent them skedaddling.

Hur is one of those RARE individuals who, seeing a need, quietly figure out a solution and set about helping make that happen.  Then they just as quietly fade back to wherever they were.

I wasn’t like Hur, that day in 1970.  I was proud, tired of feeling upstaged by life, wanting to be noticed.  I got noticed, all right.  It left a sour taste in all our mouths.  I’m still ashamed of that moment.

I decided later in life I’d rather cultivate the spirit of Hur and be a man like him.

It really is true:  it’s truly amazing what you can get done when it doesn’t matter who gets the credit.  It’s also true:  the One who deserves the credit for all the good stuff that comes your and my way is ultimately God.

That’s why THE STAFF is important in the story.  It signaled to every tired, sweaty, disgruntled, even wounded Israeli soldier on that battlefield that God’s Personal Presence was with them and to not lose hope or faith.

Today when things start feeling a little underwhelming?  When you feel dumped on, overloaded, and unnoticed?  Remember a guy named Hur.

He was okay with playing whatever part God needed.  And it was through his selfless spirit a decisive battle was won that day.  Even God said so.

Can’t get much better bona fides than that.