I suppose it’s inescapable.  When you’re a tyke, moms are onerous, overbearing taskmasters whose total vocabulary consists of one, resounding, echoing, “NO!”

And those frowns.  Oh, baby–an outlaw biker giving you the massive stinkeye after seeing the scratch you just etched on the newly-painted gas tank of his customized FatBob XFDF has nothin’ on the fierce slant-browed, squinch-eyed, terrifying visage  of a seriously-furious mama. . .

Leave her A-lone.  Better to try bumming a ride from the biker dude than to mess with the mama!  ‘Course, if she’s the rider of that defaced Harley, you’re pretty much toast anyways. 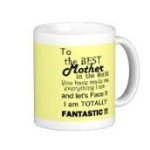 As a kid I knew I was stuck with my mother.  There wasn’t a “Moms-R-Us” nearby or a bartering club where kids could shop around and exchange their lame mothers for a cooler, hipper mom than we had.

That seriously bummed me out.

Just about everybody else’s mom was a lot nicer than mine.  Definitely cuter.  I mean, they never yelled at me, they gave me cookies and snacks–and PBJs.  How can you not be totally smitten down to your socks by an older woman who gives you PBJs?

If you’re wearing any.  The socks, not the PBJ.  Wearing a PBJ would just about be the worst infraction of the Boy’s Code of Miscellaneous Conduct in the history of Always.  Waste of good jelly and peanut butter.  I mean, who does that?

Now, why couldn’t MY mother be as nice and kind to me as all the other guys’ moms?  God obviously singled ME out to interminably suffer with the meanest, toughest, stingiest and healthiest mom in Earth history.  Nope.  Never sick.

Remember Job’s wife.  Uh-hunh.  Like that.  And they say God has no sense of humor, leaving her like that. . .

“What do you need it for, dear?”  Aw, nuts.  She’s gonna get all sensible and stuff.  I’d reluctantly tell her and, sure as shootin’, she’d say something like, “Well, let’s see if we’ve got something around here that’ll work just as well…”

That was Ida Jane:  Sensible.  Hardy.  Strong-minded and -willed.  Rollicking sense of humor and adventure.  Personal Christian faith as bull-strong and powerful as a Union Pacific diesel locomotive.  Could outwork most men.  A born cook and a great wife–or so my dad said.  I couldn’t see it, frankly, but then that was back when I was a young boy.

Upon reaching a modicum of adulthood, I gave years of thought to possible avenues of retribution I could pay ahead for being subjected to such maternal malfeasance.

Finally the answer flashed brightly before my eyes!  I still occasionally see spots.  It was a true “Ah-HAH!” moment.  Unable to get back at God for His paltry choice of my mother, I found somebody just like her–only more–and married her!  I know some of the wedding guests seated toward the back were wondering about the maniacal chortling they could hear from our dressing room. . . .  I didn’t care.

Sweet vengeance was mine!

My new bride – Brenda Ellen – who would be the mother of our children was even more sensible, hardy, strong-minded and -willed–with an even weirder sense of humor.  Her motto was and remains, “It’s only funny until somebody gets hurt.  And THEN it’s hilarious!”

As our children came along, grew into tykehood, and then childhood, I watched as their eyes opened, focused on her, widened in alarm, stunned at what they saw and heard–then slanted towards me as if to plead:  “Can’t you DO something about this?”

Rolling and holding my stomach from gales of helpless laughter at their plight, I said, “I ALREADY HA-HA-HA-HA-VE!!!”

Hmph?  The cooking part.  Right-right.  If anything she’s better in the kitchen than Mother–and that’s high praise because Mother kept us well-fed when it often seemed to me there wasn’t much there from which to work.  She’s a woman of strong personal faith, of indomitable courage and inner strength, and the finest companion any man could ever want.

That’s because choosing a wife is no laughing matter.  When it was time for me to make that choice I found the oldest friend I had on the planet–best buds from tykehood.  We’ll have walked together in life for 40 years in another eleven days.  A wife and companion to me, a mother and counselor to our son and daughters?

Yep.  Had I put in an order with God for my kids to be subjected to the same kind of mom I had, He couldn’t have filled it any better.

So, on Mothers’ Day of 2014, here’s to Ida Jane and Brenda Ellen – the two best moms I’ve ever been blessed to know.