#12: PRETTY SURE THE WORLD WAS HERE FIRST

Millenials have been in the news a lot lately.  Fresh out of college with their degrees and no jobs.  Yes, there are reasons why they’re not being snapped right up. 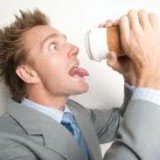 There are also reasons why their parents and grandparents seem to be in higher demand by businesses hiring new people.  Since they are in the news a lot lately, I’m not repeating it.  What this series of articles has in common is a list of 13 things about which mentally mature people just don’t worry.  This is the next-to-last one, and as on time as the 8:46 Limited.  Always shows up at 8:52 on the dot.  So-o-o what’s this almost-last thing strong thinkers just don’t fret about?

Ever notice those in ‘leadership’ encouraging our kids and grandkids to demand higher wages and benefits and extras while producing less and less never seem to have steady work or themselves know what they’re doing?

Lazy people with a “gimme” attitude never build anything of lasting value.  Unless they change their ways they’re never worth much, either.  You don’t need me to name any examples.  One prominent one popped immediately into your mind.

You’ve known some like him.  Probably had a stupidvisor or two like him.  Might’ve even been related to one here or there.

Strong, mature-minded people, regardless of age, don’t believe the world owes them one thing other than the opportunity to make something of themselves.  If in looking at their circumstances they don’t like what they see, they just buckle down and get busy changing ’em where possible; and where they can’t change them, making those circumstances work to their advantage.

Mature-minded people waste little time fretting about what others do, say or think.  Their personal philosophies read like what you’d find in those “self-help” books on your brother-in-law’s bookshelf he never reads.

There’s been just as much in the news about fat-cat company CEOs and CFOs walking off with multiple millions in severance packages while their companies are either close to or actually declaring bankruptcy.  Point?

It’s not just the young and inexperienced struggling with a down-economy world.  The same lesson applies:  regardless of age, position, former popularity, inflated self-opinion or just being flat spoiled rotten everyone’s beginning to tumble to the plain, unvarnished facts.

The world does not owe a one of us, no matter who we are or were, a guaranteed salary or impressive benefits.  Your nation or company does not owe you anything other than the possibility of a decent job.  None of it has to do with your degree or degrees or where you attended.

Nobody seems to like the phrase, “old-fashioned” so let’s use “here and now”.  Despite promises to the contrary made by persons who know better, we have before us all the chance to show our stuff, using the “here and now” way.

Yeah.  You and I get to show what we’re made of based on what we can actually do.  Based on how practically useful we are to our company or organization.  Quit talking about what you’ve done and show us what you can do.  Quit standing around with an iPad giving the impression you’re in charge of anything, put on some work clothes and gloves and get to work doing something, building something–and yourself in the process.

You’ve already figured it out.  Having to actually show what you can do, letting everyone else on the team see your actual worth?  That’s a fast way to decide who stays and who goes.

Those who stay, build.  Those who go have a choice:  find out why and do what’s necessary to make themselves attractive to the next place where they seek work.  Swallow pride.  Learn to keep mouth shut and mind open.

And put down the cell phones, iPads, iTablets and every other distracting source of electronic info override that’s damaging an entire generation’s ability to effectively communicate.

Consider a policy that has all such devices locked in a desk drawer during normal working hours, excepting lunch.  Companies of every size have business communications systems.  Personal ones are extraneous and only decrease productivity and personal initiative.

Last I knew, few businesses worth their salt pay employees to play on their phones or Tweet or blab on Facebook.

“That’s just one thing.”  Yep.  But it can point to a greater generational,  even multi-generational pathology that threatens to replace something we used to do a lot, and well:  get up, walk over to another desk or office, sit down and actually talk.

Not old-fashioned at all.  Right here, right now.

When it gets right down to it, right in the middle of this amazing tech revolution the thing that’s going to make the biggest difference in rebuilding modern businesses and creating personal success stories is some of our original equipment:

And a spirit that would rather earn than have unearned things handed to it.

When we turn that corner, there’ll be a change.  Yes, it’ll cost us something.  But it’ll cost you and I a lot more if we don’t.

Yep.  The world was not only here first.  Doesn’t appear to me it’s terribly impressed.  It’s ours to do, me and you.  Whaddya think?  As Jim Goodwin says, “The impossible is often the untried. ”