We all live under the same sky, but we don’t all have the same horizons.  Germany’s first post-war chancellor, Konrad Adenauer, said that.  One of his points was that groups of people don’t make things happen.  Individuals do.  It’s their personal view, their point of view that often makes the difference.

Persons strong-minded enough to get along swimmingly with themselves are those who enthuse others.  It is in that process of informing and empassioning others that groups are created.  And those groups, sufficiently numerous and strongly articulate, are who drive public policy, public activity. 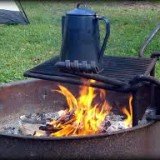 But it doesn’t begin with the group.

It starts with one.

That would be you.

We’re on the last leg of a 13-message run about things mentally-powerful people don’t allow to bother them.  Messages 1 through 10 are archived and available to you.  Many have responded and commented, which is great.  Here, then, is the 11th thing about which Buffed-Brained people do not worry:

They’re not afraid to spend time alone.  Prior to the advent of stampeding electronic media, appreciating solitude might not have meant so much.  With the onset of virtually no electronic downtime, the blessing of uninterrupted solitude for a person with a trained, alert mind is a big one.

When’s the last time you were able to put down those earbuds and whatever magnificent contraption you had ’em plugged into, picked up a pad of paper and a pen, and just wandered off someplace by yourself to think a little?  Jittery, hunh?  And the longer you sat there, the more you felt the reality of what a friend says is the “skittering self”.

Unnerving, isn’t it?  We’d all like to think we’re mentally strong.  Habits defeat other habits, including forever needing to be ‘plugged in and powered up’.  If you don’t learn the art of relinquishment – in this case exchanging the habit of being surrounded 24/7 by bleeping, booping, vibrating little leashes for one of regular solitude – you’ll rarely move forward to embrace whatever new thing God has planned for you.

Hmmh?  How can I say that?  Well, how long as God been around?  Has He ever had trouble communicating with you?  The issue never has been His ability to inform, to impress His thinking on yours.  It’s always been problems with the receiver. . . .

At least, that’s the way it’s been with me.

Solitude.  Even the word scares social butterflies.  Strong-minded people see it as a circle of old friends. . . .

Good thing about old friends?  You can sit there without feeling the pressure of needing to blab, sensing the others’ pulse and breathing, feeling like you’ve just had the best visit of your life.

Strong-minded people don’t mind one-on-one time with themselves.  They’re not afraid of being alone.

It is when the mind is relaxed and quieted that ideas form; faith more easily recharges the soul’s batteries; and elusive answers, before now  skittish as a new colt, sidle up and let you get to know them.

That’s why the pad and pen are necessary.  Sure, you can use your mic-activated electronic notepad doolie.  Knock yourself out.  There’s just something resolute about physically writing down what is laying over your mind and spirit like a warm blanket.

However you choose to hold onto those ideas and answers, be sure you do.  Generally, answers that come from times of thoughtful solitude are of the ‘out-boxed’ sort.  That’s not a bad thing.  Some of the best advice I’ve ever received is, “Know your limitations and then defy them.”

The only way to do that is to relax your thinking enough to let that iron grip on where you’ve always been go long enough to see where God might be leading you.

Your future depends on a lot of things, but mostly upon you.

Oh–and that quote popularly attributed to Garbo?   By her own admission, what she actually said was, “I vant to be left alone.”  Big difference.