Story: Romance In The Old Park

The little girl played in the park whenever she could. 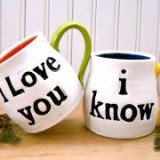 As parks go, this one wasn’t a standout.  The swing set only had one canvas seat still attached to the chains.  The others hung limp as though having long-since forgotten the joyful giggling and screams they once helped create.

The undulating long slide was rusty in places.  The merry-go-round squeaked as it turned, complaining like an old man being forced to change rocking chairs.  The pea gravel that once covered the ground of the park had long since been stolen or swept until hard-packed dirt was all that remained, decorated by whatever garbage the wind blew across it.  The only thing that came close to qualifying as having any beauty there was a hardy shrub, a bush of indeterminate origin.

None of that mattered to the little girl.  Usually wearing ‘Early Goodwill’ clothes often frayed, worn and mismatched, she was most always there.  In nice weather she often was barefoot.  Yet every night after school, every Saturday – and in Summer almost daily – she was at the old park, usually sitting and playing in the shadow of the bush, lost in her protective world of make-believe.

The shop owner across the street at Hoarse Feathers, a natural food store, always tried to keep an eye on her.  He never remembered seeing the girl walking with a parent.   She showed up on her own and quietly left the same way.

One day as she played, she noticed a picture stuck in an inner branch of the bush. Looking at it and then glancing carefully around, she turned back to it, studying its cracked surface.  She looked around again, then  gently slid it into a pocket of her dusty, soiled shorts and went on playing.

As she grew, her trips to the park became less frequent, but the son of the shop owner had grown up watching her, going over to play with her and occasionally taking her candy.  Other little treasures and trinkets found their way across the street, too.  The girl received them all, sometimes with polite appreciation and others with wide-eyed interest.   When she’d go home they all joined the picture in a little box she kept.   As time passed and she grew in beauty,  his interest flowered into love.

Inheriting the store after his father’s retirement, he asked her to marry him.

After her wedding, she and her husband were sorting through things both had collected, deciding what to keep and what to toss or give away.  She hesitantly opened the little box that held those cherished possessions from her lonely childhood.  It had colored-glass ‘jewels’ on it, the ruby missing since before her 11th birthday.   One by one, she took them from the box, laying them down and and they remembered together. . .  The antique Coats & Clarks buttonhook once belonging to his grandmother.  The silver volume knob off the radio in his dad’s favorite car.  A funny-looking metal thing he told her was an old skate key.  The leather necklace with the miniature kaleidoscope on it.  The picture of—

Suddenly she realized her husband had stopped smiling and was looking intently at the picture with a strange look on his face.

“Who is that little boy in the picture?”

She huffed and ruefully answered, “My first love.  I never had much when I was little so when I found this, I made up a story about it.  About him.  It’s nothing.  Kind of stupid, really.”  She started to toss it into the discard sack when she noticed her husband biting his lip with the glint of tears in his eyes.

“I lost this picture when I was nine.”