No one likes giving up.

Some personalities are less aggressive; give them a reason to fight and you’ll long for a brash, always-cocked-and-locked High D. 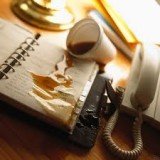 No one likes giving up.  Of all the possible scenarios, the singular worst is the sick awareness that you gave up right before you’d have won.

How long does this go on?  As long as it takes.  Not walking is not an option.

Not winning is not an option, either.  At least, it shouldn’t be.  Regardless of personality, those who win get it:  failing at something always precedes winning.

Strong-minded people avoid the nonsense that somehow rationalizes that stopping the process of failing equals winning.  That mentality has always been self-absorbed foolishness no matter who espouses it.  It’s a rough thing to observe another unduplicatable human being, made in God’s own image, having decided it just isn’t worth the effort and quitting.  Giving up.  I’m not failing any more, so that must mean I’m actually winning, right?  Right?

Winners at anything understand that repeated failure informs.  It gives new light, new discernment, new vision.  Many a fantastic idea for a new breakthrough service or product came about because of a “failure” in something else.  It wasn’t a failure at all.

As long as you’re making an effort, there’s no such thing as failure.  Elbert Hubbard said, “There is no failure except in no longer trying. There is no defeat except from within, no insurmountable barrier except our own inherent weakness of purpose.”

In other words, every “failure” carries with it the potential for yet another type of win.

Far too many timid or lazy souls who gave up suddenly realized the shocking truth:  that win could have been theirs!  All they had to do was hang in there for another try.  And another.  No less than Dale Carnegie himself said, “Most of the important things in the world have been accomplished by people who have kept on trying when there seemed to be no hope at all.”

So–how about it:  let’s get out there and FAIL.   Failure – defined as just another way of finding out what won’t work in this instance – can be your friend if you let it.

It’s the only real path to winning.