Coffee.  Good friends.  A few cherished minutes during our day to visit.  Doesn’t get any better, does it?  I’ve got some fresh-ground, fresh-brewed Columbian Supremo.  Here; let me pour. 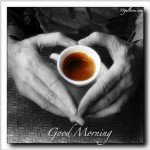 Your words are being carefully assessed and weighed.

As if that isn’t enough, your actions are being observed, quietly stored in memory files.

That’s not why I’m pointing this out to you.  There is nothing new about it; it’s been happening since the first day you modeled your spiffy new duds in Mrs. Olsen’s first grade class.  Uh-hunh.  Pretty much all your life.

“Aah, it really doesn’t matter what I do or say.  Nobody pays that close of attention to me.”

Couldn’t be more wrong.  Think about it.  Don’t YOU watch, listen to and draw your conclusions from certain people?  Sure, you do.  That’s why there are so many great, pithy quotes about you and I becoming just like those around whom we hang.  Show me who you spend most of your time with and I’ll know who and what you are.

Can’t escape it:  you and I are largely the sum of those we spend most of our waking hours watching and listening to.  Preposition.  I know.

Got it?  Now, here’s the point:  you’re watching and listening to the WRONG people if you think you’re not the example somebody is following so closely that if you sneeze, they will, too.

Undergrad ministerial training.  17 credit-hour load.  Pastoring full-time at a little church 30 miles away.  Trying to work one or two nights a week to supplement a very meager salary in another city 30 miles the OTHER direction.  Eating and sleeping in the Time-cracks.  All of this happening in northern Indiana where real winter occurs for more than a day or two.  The only vehicle we could swing at the time was a little Mazda GLC.

Great mileage, functional wipers and a dependable heater/defroster.  Yay, car!  Traveling that North-South road for each day’s 60-mile round trip was, well, a trip.  Icy, blowing snow obstructed vision and drifted over and across the road almost as soon as the huge orange plows moved it to one side.  The more prudent of us motorists slowed down, put on our emergency flashers and crept along until we could see a little better.  The most prudent stayed around the university and out of the blizzard’s amazingly white teeth.  I had no choice; my family and church were up North and I had to be with them.

Did I mention that my little GLC was white?

Just as I snuck onto the interstate headed North and the real force of the wind-chased snow and ice began mistaking my little car for a hockey puck, I suddenly noticed six or seven sets of headlights back there occasionally peeking between snowgales.  You got it.  They were following me!  It was right about there where God and I had a lively (and, in the interest of full disclosure mostly one-sided) conversation.

“Joke?!?!?  I mean, come ON, Lord.  You mean to tell me ONE of those sets of headlights does NOT belong to a ¾-ton Power Wagon four-wheeler with knobby tires ?  You know, those diesel-snorting behemoths that are all over this part of Indiana?  WHY are they following this pitiful little two-door teacup of a car that’s painted WHITE?  I go off this road, which is looking like a REAL good possibility, they’ll NEVER find me until SPRING THAW!”

I was ver-r-ry respectful; I’d cut my teeth in the Pacific Northwest driving on snow and ice and started college in northern Idaho.  My first USAF duty station was in Great Falls, Montana.  The next one was in King Salmon, Alaska.  I knew enough to be careful of whiteout conditions and routinely carried reinforced chains, emergency equipment, first aid supplies, food bars and water up there.

Now, of course, I had none of those things.  There was no room for them in that little white GLC, and on a salary of $95 a week, neither was there any money for them.  I knew it was counterproductive to hyperventilate and divert my attention from the road conditions while ranting, even for a few seconds.  I reflected calmly upon my situation.  I chose to respond in a mature fashion.

Once I did, another prayer immediately formed in my heart and mind as I continually scanned my mirror, taking comfort from those following headlights shining intermittently through the swirling snow driven by the merciless wind that at least I wasn’t alone . . . .

“God?  Those people are all following my taillights because they can’t tell where the road is, either.  Please keep us all safe, and help me to stay on the road and not lead any of them into the ditch.”

You’ve made the connection.  Doing your own thing while saying, “I’m not my brother’s keeper so it doesn’t matter” doesn’t work.

You are your brother’s brother, your sister’s sister.  You may not see headlights in your rear-view mirror, but you sure ought to imagine them:  people are following your lead.  You are responsible for your example in front of them.

“Well, I’m not always in front of them.”  With respect, yes, you are always in front of somebody.  Somebody’s always watching and listening, evaluating and deciding based on your example.  The ones you likely think are breathlessly waiting on your wisdom-jewels are usually not the ones we’re talking about.  They’re admiring themselves and paying scant attention to you.

No, those closely following your lead are seldom noticed until long years later, if ever.  But you have no idea of the profound effect your daily example is having on them.

Let me leave this quotation from Viktor Frankl as this week’s challenge as you consider what you’ve just read:

Live as if you were living a second time, and as thoughyou had acted wrongly the first time.

Occasionally in this life God grants the blessing of reconnecting persons once close, but whose relationship dwindled with Time’s passage.  When that has happened to you, whether the memories and associations were bittersweet or joy-filled, the truth remains:

You never know whose life you are touching and impacting.  Though the others may never say a word, your life, your daily walk is making a difference.  It’s when you least think you’re being watched and followed that you are making the most profound imprint on somebody.

Many of those imprints go unnoticed this side of Heaven.  If you’re blessed with the chance to revisit one or two of them, to appreciate that former friendship, to celebrate that one-time attachment, thank God for the opportunity.  Do what you can to assure it’s not overlooked or forgotten again.

It’s a gift.  And it’s a precious one you ought to cherish.