On my street, the only flag flying is mine. 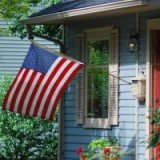 On my screens, the only video record of what happened on 9-11-01 is what I pull up from my own files.

Facebook shows profile pictures of those events sent by individuals.  But no news outlet thus far has actually shown why on September 12th we were once again UNITED.  Why flags were everywhere.

Every street, every store.  Every car.  On hats.  Along highways.

Even far-Left antagonists of everything the United States has been were seemingly cowed and singing, ‘GOD BLESS AMERICA’ at the top of their lungs.

They may not have meant a word of it, but even they understood that was the wrong time to show their true colors.

Now?  On my street, the only flag flying is mine.

Time?  Not much, really.  It’s only taken 12 years for the incessant clamor of the “America-ain’t-all-that-wonderful” crowd to do what I thought I’d never see.  They’ve finally worn down and evidently silenced the preferences and voices of the brave.  Tolerance for those who differ and might be made uncomfortable by our patriotic fervor and unashamed love for everything America is.

I’ve noticed that tolerance only travels one-way streets.  It never returns to us.

We who are conservative in our nature, outlook and desires are systematically rejected for that same consideration.  Ours is not seen as a legitimate viewpoint; it and we are raucously laughed at and shoved aside as if our feelings, thoughts, opinions and core values just don’t matter.

“God, I’ve been blessed to be born and raised as a free man.  Your Word teaches that in this world we’ll have trouble.  Well, trouble seems to be upon us.  Since it can’t be right for some of Your choicest followers be set upon, mistreated, persecuted and often killed for shining Your Light on the world around them and tossing Your Salt on it, then I ask this.

“Help me to be a man of principle, decency and righteousness to the point that even those sworn to destroy me and all like me will respect who and what I am.  I would rather be a potent, positive influence for Your Word and Your way, turning others to You.  But if in Your wisdom You know the time for that is past help me be a man.  Help me face those who would triumphantly crow that they’ve succeeded in forcing You and Yours out with the rest of the story:  You long ago overcame this world along with all its theories and attempts to replace You.

Remember this day.  Remember the innocent victims and the determined patriot heroes of New York, The Pentagon, aboard Flight 93 over Pennsylvania, and last year in Benghazi, Libya.  Do your online homework.  Find news clips of what actually happened in both 2001 and 2012.

Watch it.  Grasp it.  For those old enough, relive it.  Teach it to the children born since then, for there are those determined to sanitize their minds and media library records, pushing them to believe none of it happened, or that it never happened as it did.  Technology exists to manufacture photographs and alter the real ones to offer false ‘proof’ to what isn’t real at all.

All truth is God’s truth, no matter its origin.  Truth will always out.  At issue is whether we wish to receive it when it emerges from manmade shadows.  And it always does.

Twelve short years is all it’s taken to get America to be ashamed of and shake off the silliness of patriotism.  No, not all of us; but enough.  Twelve years until our collective memories and consciences have been seared by the steady sneering and arrogance of a determined left wanting to bury who we were and knowing if they kept at it, it would only be a matter of time.

And still on my street, the only flag flying is mine. 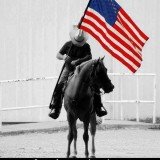 You’ll have to decide your own course.  As for me, I am an American.  My family’s always been proud Americans from the first time we set foot on free soil.

I’m glad I still have one to display.  Always have; always will.