Sometimes What You’re Hunting Isn’t What You Catch

Three friends were on a hunting trip and got lost in the Canadian woods.  As you’d expect the inevitable happened.  The intrepid trio – a psychiatrist, an electrical engineer and a thoracic surgeon – only took three hours to be totally lost.

Stumbling on a trapper’s cabin but getting no response at the door, they went inside for shelter and waited for his return.  It’s common etiquette up in high or desolate country.  As long as you clean up after yourself, bring in more wood and lay a fire for the next person, it’s all good. 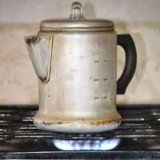 And get the coffee pot ready.  Priorities, people.

In the corner, on a crude platform at waist-high level was a wood-burning stove. It quickly became not only the focus of interest for their half-frozen bodies but the center of their conversation as well.  While waiting for the coffee to perk, they began discussing it’s design.

The psychiatrist said, “Well, it seems clear the stove’s unusual position is evidence of psychological problems brought on by extended isolation.”

The engineer was as excited as engineers are likely to get, saying, “This is amazing!  It’s a crude form of forced-air heating!”

The doctor politely curled his lip at the other two, saying the poor guy had arthritis and found it too painful to bend over to fuel his stove.

While the three were drying out and warming up over – you guessed it – fresh coffee, the trapper returned, stomping the snow off his boots on the small porch then taking them off and setting them inside the door before as he came inside.  He greeted the hunters and accepted a steaming cup of coffee.

After the normal polite small talk, they couldn’t hold it in any longer.

They couldn’t resist asking about the stove.

I wasn’t on that hunting trip, but I’ve been where those guys were.

I’ve tried to read someone’s mind. I’ve seen motives that weren’t there. I’ve walked into situations, heard the first three words of the conversation, and unable to confine my brilliance made a Class A fool of myself by some badly chosen response.  Or I’ve used a perfectly innocent slip of the tongue, even well-intended counsel as my excuse to take offense.  This may come as a shock but I can be a real jerk at times!

On occasion, the victim has been a stranger. At other times, it was a friend from church or colleague at work. Most often, it has been my wife or one of my kids.

I see you nodding.  Thanks.  I hate to simmer in my own juices alone.

Communication is a wonderful thing – when it happens. But there are so many barriers. We’ve all got baggage, just like those three hunters carried backpacks along with them. The same words can mean one thing to you and something entirely different to me, totally meaningless or ambivalent to one while horribly wounding another.  Then, too, we ALL have personal prejudices and gaping blind spots that shape our thinking and our responses.

During my residency as a hospital chaplain, one of the first things I learned was to stop walking into situations mouth-first.  I was taught almost from Day 1 to ask, “Can you help me understand what you mean?  How is that for you?”  I’d like to tell you that from that moment on I’ve always remembered to use that great little tool to keep from tasting my feet so often.

On those rare occasions that I remember what I was taught, I’ve seen what a difference there can be in relationships when I unchip my own shoulders and with transparent, authentic regard allow others to do the same.

No.  They’re not always willing.  It is pointless to try to explain yourself to someone intent on misunderstanding your words or actions.  If they don’t want to hear it, they won’t.  That is a toxic environment you do well to avoid.  Love them but avoid being close.  They usually have proximity fuses. Armed.  It’s not you, it’s within them.  But you’ll have to let them own that and it may take awhile.

For everyone else, practice asking for clarity instead of jumping to contusions by assuming you know what you don’t.  It’s enlightening and shocking – shocking, I say, how often one can save face by keeping the lower half closed.

Yeah, I’m chuckling again, too.  Shaking my head at those three.  You’d think with all their education and being professionals and all that they’d know better, huh?

The original story upon which this post is based came from Rubel Shelly, a favorite writer.  He makes me think.  Hope this does the same for you.

By the way, you can make travel portions of your favorite coffee using coffee filters and dental floss.  Put each tied packet into a sealable baggie and you’re all set.  Hint:  use 2 filters.  The coffee isn’t as bitter–unless you like it that way.  When you’re ready for some fresh joe, just snip or untie the floss and perk away!  Or drip, for those whose camping expertise always involves queen beds, cable and great-deal room rates.