Good morning.  Pour yourself some of this Guatemalan Estate medium roast.  I try to mix the style of these visits but this one felt especially intense.  Yesterday and today I got up asking God for His guidance about this week’s visit together.  Both days, here is what laid on my spirit. 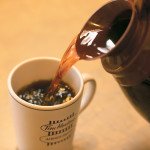 Aaron, Moses’s brother, was learning some hard lessons.  The first one was that, as high priest of Israel, neither he nor his sons also serving as priests could claim exemptions from God’s direction.  In other words, just being involved somehow at church doesn’t mean you don’t have to mind, that you have some kind of privileged position that lets you test out of what God’s clearly laid out in His Word.

God had made it very clear to Aaron exactly what kind of an offering he and his sons were to prepare, and exactly how to do it.  They did and God answered with visible fire that consumed the offering, stunning the crowd.  Hey.  I’m not proud.  I’d have been stunned, too.  In fact if that happens next Sunday?  Stunned.  Count on it.  I think we’ve gotten way too familiar with God ‘stuff’ that we’ve forgotten Who and What He is, and just how infinitely powerful He is.

Back to the newsreel.

The ‘star’ sons, Nadab and Abihu, figured if a little of God’s fire was good, a lot is definitely better.  With arrogant pomp, later that day they offered ‘strange fire’ (unasked for by God) at the same altar.   Trouble was God never told them to do anything on their own.  God answered with fire, all right.

Their charred remains were unceremoniously dragged outside the camp and specifically away from the Tent of Meeting.

It happened abrupt.  It happened fast.  All their high-priest dad could do was stand there in shocked silence.  That was not the way this was supposed to go down.

“Okay, um, I’m really not into some dry Old Testament stuff, Dan.  You got something for me that relates to me, right now?”

Lesson from God to Aaron and his two remaining sons:  “Distinguish between the holy and the common.” (Leviticus 10:10)  Do you s’pose any of the three EVer again set foot inside the Tent of Meeting without an increased heartrate and a quick glance around?

Some translations use ‘profane’ instead of ‘common’, but you get the point.  There’s an ever-thickening crude, scarred, profane crust, an ugly scab of repeated denial of and resistance to God’s sovereignty and even His existence, subtly hardening over time, that seems to encase every part of life.  Conversations.  Work.  Ideas.  Expectations.  Habits.  Morals.  Spirituality.  All of it.

There’s been a steady shaving off of paper-thin layers of common-sense restrictions, moral and social guidelines that provided millenia of effective barriers protecting homes, marriages, families and friendships.  And we’ve gone along with it.  Toxic things outside those barriers are nothing new.  It’s just that God told us to keep them out and leave them alone.  Naturally we figured we knew better. . .

That wilfulness is always labeled ‘progressive’ but never progresses.  It always digresses–removing and weakening and destroying rather than improving and strengthening.

It keeps on because well-intentioned believers try to practice Christian kindness in hopes of winning “the lost”.  So they accomodatingly back away from clear Biblical truth, thinking it shows good faith and the willingness to reach out to “the lost”.

Problem:  “the lost” don’t think they’re lost.  If anything they take pride in the label.  After all, they keep getting their way because professing Christians keep backing up.

We used to hear, “Here’s what God says about it.  I love you but I love Him more, and because I do that’s my position as well.  Agree or disagree, your argument is with God and what He says, not with me.  I’ll keep right on loving you and being your friend, but my decision stands.”  Yeah.  A solid, straight line that would not, could not be crossed.

Where that line was is now way too often a wide, fuzzy, faded area so roughed and scuffed from being erased and “adjusted” no one recognizes it any more.  Too often there isn’t one.

Occasionally it gets serious.  “Maybe if I saw some consistency in your daily life I’d listen to you.  As it is, I see nothing compelling me to change.  Your work habits, your conversations, your lifestyle, even the vibes you give off don’t seem any different than the rest of us.  If what I see in you is the best Christ has to offer I’m not interested.  There’s no point in changing unless you’re offering something better.”

The holy isn’t any more.  Sacred?  Nothing.  Not so’s you’d notice.  Everybody has their agenda, angle and price.  Don’t believe me?

“That’s just human nature.”  Exactly.  As men and women of Jesus, we’re supposed to be growing closer and closer to Him and not giving in to our natural impulses.

“Well, ‘profane’ is a pejorative label that’s not helpful in presenting a positive portrait of Christ to our world.”  In light of Miley Cyrus’s latest desperate attempt to trade a clean reputation for soiled money and questionable fame, I can think of nothing that fits quite so well as ‘profane’.  The same could be said for millions of producers and fans – and her mom – drooling over the whole degrading segment.

Worship has increasingly morphed into performance-level entertainment where nothing is required beyond showing up.  And technology has now made physical attendance optional.  Please understand me:  there’s nothing wrong with having the latest tools for ministry to our age.  There’s a LOT wrong when they have us. . .

There’s also a lot wrong with a Church that increasingly gets uncomfortable with what ‘sin’ is or is not. Some won’t even use the term.  God does, and He defines it in the Bible.  We’ve all got access to a Bible. Reading it is probably indicated.

God gave us ten original rules for ordering life, work, worship and play.  Just ten.  Our world and part of the Church can’t stomach them.  Those commands cramp their style because it’s hard to do any serious, creative sinning with “The 10” hanging on the wall, in the school or in the courthouse.

God’s still God.  He never rescinded His commands for living.  Not even one.  Hanging on the wall or not, you and I will face Him with how we shaped ourselves by those Ten Rules.

“Okay.  I’ve hung with you this far.  You’ve defined the problem.  Got any solutions, there, bub?”

Yeah, I know.  I’m not.  God’s not pleased with a pretty hefty slice of the Church that claims Jesus as Lord.  I can’t change the Church.  I can, though, make sure the ‘me’ I really am is pleasing to Him.  If that’s true, then all else in this life will fit.

I can also do my best to encourage you to do the same.  Know why?  Really?  You have to ask?

It’s because I love you and believe in you!