The cell phone in my pocket was having a fit.  It buzzed, vibrated and bounced to the latest ringtone a mystery nerdo chose.  You know– “Hey, can I look at your phone for a minute” with those big, innocent eyes.  I thought I knew the identity from the lyrics blasting from the tiny speaker:

One would think I’d be accustomed by now to the switch from a simple, steady ring to this jittery, loud nervous disorder by which cell phones now are afflicted.  Then, too, convention dictates that one answer a ringing phone.  When the ‘ring’ is the electronic equivalent of flaming needles of pitch pine driven under one’s fingernails, a quick intercept is a great idea.  I really need to be more careful who babysits my phone.

“I had no idea you liked funky music.”  It was Dan.

“Oh, ha-ha.  So you’re in on this, too.  Anything constructive going on or is your sole aspiration to irritate your betters?”

Dan chuckled.  It seemed like they’d known each other forever.  There was an easy, casual link between them that sometimes made it hard to tell them apart when together.

“Actually, there’s a real purpose for this call, as opposed to the thousands intended merely to harass you.”

“You’re beginning to get responses to your post about “Write Me Your Heart”.  Here’s one wants to stay anonymous but feels your general response might help someone else with the same concerns.”

“Ah.  Okay.  Other than privacy requests, send ’em to my inbox as written.” 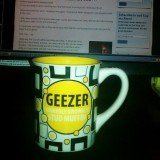 I sat back, savoring some fresh-brewed coffee.  It wasn’t long before my computer chimed, letting me know the email had dropped into my inbox.  Taking another sip of aromatic, hot joe I began to read . . .

“My heart is tired of being taken for granted.  I’m so sick of being privately shunned while being treated to public, social gladhanding and the whole hug\pat-on-the-back\airsmooch shtick I want to puke.

“This stuff hurts.  I’d rather see a blank look or even an honest frown when they see me instead of that sickly-sweet little smile they paste on that so obviously says, “I’m only tolerating you until I see somebody I like better; and this shouldn’t take long.”   I guess they think I’m too dense not to see it for what it is.  Do they realize how shallow they look when they do this?  Do they honestly think their status or money or family name gives them class?

“The only reasons I can come up with for why the ‘beautiful people’ pay any attention to me at all:  either they need to use me (again) to do something they know I’m better at than they are, or that they don’t want to be bothered with; OR they didn’t see me coming in time to get away without having to speak to me.  After all, I’m obviously not in their circles, right?  It’s SO degrading to be forced into actually talking to regular people instead of their own kind – whatever that is.  I’m cordial to them all, but I’m the one doing all the reaching out.  If I don’t, it’s like I’m a rusting car bumper laying in the ditch.  They can look right at me and never know I’m around.  Unless they want something.

“I’d rather be around a few others like me.  At least they’re real a lot more than they play these stupid “Oh, aren’t we wonderful” games among themselves.  Is there such a thing as social inbreeding?

“I.   Hate.   Fakes.  But there seem to be a lot more of them than real folks.  I’m open to suggestions because I’m real ready to just write ’em off, in and out of the church.  I’m disgusted by what comes across as a lack of character and the way they just swoon all over each other while looking down their collective noses at the rest of us.  Just call me “Fed Up With False Friends”.”

I thought for a few more moments, then began to type.

Thanks, Fed Up, for your openness.  I appreciate your willingness to lay your thoughts out there for others to read because you’re not alone.  I’m guessing everyone who reads your comments is nodding (or shaking) their heads in agreement.  Let me reread your thoughts and have some coffee while I think about how to respond. . . .

Who are “they”?  Why is their attention and recognition important to you?  Is it possible you’re attaching social importance to them they don’t have coming?  Haven’t earned?

Think back to middle and high school.  Remember everyone considered cool and/or hot?  Remember how so many kids clustered around them trying to get their attention?

Which of those people you knew are now most worth knowing?  The ones who paid little attention to “The Cool And The Hot”!  Who quietly, steadily kept their grades up, moved on in life and created (& are still creating) good stuff in their own lives and encouraging the same in others around them.

One more question:  What will it cost you to NOT have those you thought were so splendid to know paying any attention to you?  Has their smile of approval made any appreciable difference in your life?

Suggestion:  begin reevaluating those whom you’ve been venerating.  Perhaps it’s time to reassess who you hang with.  You become like the people you spend time with and adopt the thoughts of the books you read.  Right?

Maybe this is a good time to allow your discomfort to lead you in taking a closer look at those in your realm of influence.  Maybe it would be a refreshing change for you to choose your own heroes instead of letting society or public opinion do it for you.

And let’s consider the next step.  You would never want to come across looking and acting like “The Cool And The Hot”, right?  Nobody I know reaches out there to be vapid, shallow, arrogant and stuck up.  I know my readers.  I know you have no desire to be like the persons about whom you’ve written.

The best way I know to stop them from having such influence in your life is to begin thinking as a hero instead of a sidekick.  Or, worse yet, a worshiper.  Start thinking of yourself as an example whom others watch and want to be like.

How do you want them to think and speak and act?  Model that before them.  Be the authentic one, the real deal you wish the ones so spiffy really were.  You can’t change the lackluster, mediocre social skills of others.  But you can be constantly bettering your own.

You can be being the kind of person you wish they’d been.  That is constructive and worthy of your attention.

By the way – all those beautiful people you thought had it all together?  I’ve seen many of them in times of trauma and real distress.  They’re not the strong, resolute and powerful individuals they’d like you to think.  In all the ways that matter, they’re often as immature, unsure of themselves and spiritually adrift as those around them.

You may be the steady, strong influence for personal and spiritual excellence they need to see.  It doesn’t take money or prestige or status.  It takes a heart set on doing the right thing, a mind set on thinking right thoughts and a spirit set on right living.

You never know.  Somebody you think believes themselves too cool for you may be secretly watching you, wanting to know if they can step from behind their facade of false status or money or whatever else behind which they’ve been hiding their real self.

They may be wondering how you’re strong enough to be real and open.

They may be wanting to know how to be like you.

Thanks for writing, Fed Up.  I appreciate your thoughts and your response.

My finely-honed senses deduced from that it must be lunch time.  I couldn’t help grinning at the new mug.  It reads, “GEEZER, formerly known as STUD MUFFIN”  And on the reverse, “IT TOOK A LOT OF YEARS TO LOOK THIS GOOD.  A LOT”

“Yep, “ I thought as I headed out the door.  “Just stating the obvious.”  I do, however, draw the line at laying down that boogie and playing that funky music ’til I die.