WHAT’S YOUR FREEDOM WORTH?

Do you have the grit to stay free?

Take a long look in a mirror.  Are you worth what it cost your grandparents, great-grandparents and their forebears to put this all together? 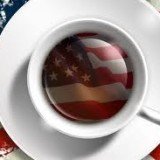 Give it some thought.

Normally the coffee’s always fresh, hot and ready.  Mine is.  I’ve had fresh coffee ready since early this morning because I got up, cleaned up and made myself some.

You know where the coffee is.  Water’s over there.  Get up and go make yourself a pot.  A friend or neighbor might like a cup.  Go ahead.  I’ll just sit here and enjoy mine while yours is brewing.  I’ll be here when you get back . . . .

Yes, I know.  Normally I make the coffee and even have donuts or bagels, too.  I’m making a point.

Our grands, great-grands, etc.  had to make whatever they had from scratch.  Now, think about it.

To make coffee often meant to pump or dip the water, grind the beans and then let it boil.  The grands probably had a campfire coffeepot that would set on a grate or stovetop and perk.  Either way, it took time and effort.

To have biscuits or corn muffins or the like meant to get busy, mix up the batter or dough and bake ’em.  Butter was made from cream which was separated from milk which was milked from the cow.  Jam or jelly was a real treat that came from canning fruit that was grown and picked and prepared.

You get the idea.

Those men and women who were great-grandparents to your mom and dad pretty much had to do everything from scratch.  And they were the ones who fought all challenges to America’s freedom to a standstill, whether actually grabbing a musket or whatever weapons were at hand and fighting or staying behind with the stuff, keeping hearth and home together during times of war.

Ever stand and observe the line at Starbucks?  Ever notice how self-focused and -centered virtually everyone there is?  Cell phones hunched up between shoulders and ears, eyes intent on laptop screens as fingers madly scurry across keyboards, texting somebody in another state while nodding at and sort of talking with the harried barrista trying to get their attention long enough to take their order.

And they’re disgusted if their latte isn’t plunked down right in front of them as soon as they step up to the order table.

Ever wonder what it would be like if this generation had to win their freedom or die trying?  Ever wonder how long it would be before they just shrugged and gave up?  There are always exceptions.  But by and large, they’re a bunch of spoiled, shameless, petulant, lazy, self-absorbed and undisciplined brats–having nothing at all in common with those hardy souls who first branded the name, “American”.

It meant something to those men and women to be free.  They never sat around whining that the coffee wasn’t made or the crops weren’t harvested or the garden wasn’t being weeded and watered.  They certainly never carped about not being paid what they thought they were worth.  They all understood:  there was no room for slackers here.  Lazy people weren’t wanted.

2013.  Guess what?  They still aren’t wanted although devious, conniving professional manipulators have encouraged them in their slothful ways.

We know why.  We get it.  We understand the games being played.  We know we’re being lied to and systematically cheated of precious liberties.  We know most of this is happening in unlawful and unconstitutional ways.

And we’re just letting it go on.  And on.

Let’s not quibble.  Regardless of the attempts by the theorist fools we allowed to seize power to ruthlessly, lawlessly force-feed their strategy of driving us apart in every imaginable way, we are letting it happen.  WE are.  We Americans.  Not race, gender, ethnicity nor any other conceivable way to pound wedges between us and cause even more divisiveness and discord.

If we come together as Americans they know their games are done.  They know this.

They can’t divide us unless we are foolish enough to allow it.  And, foolishly, we are.  Still.

So I have to ask again.

Do you have the grit to stay free?

Take a long look in a mirror.  Are you worth what it cost your grandparents, great-grandparents and their forebears to put this all together?